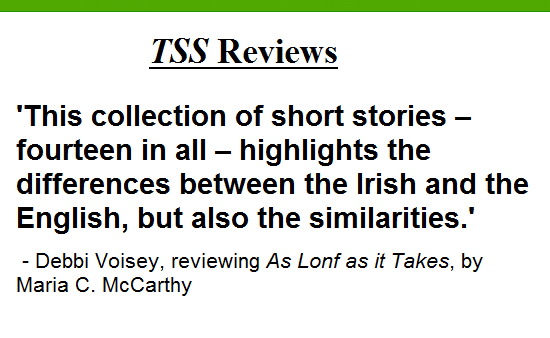 The Short Story Review: ‘As Long as it Takes’ by Maria McCarthy

As Long as it Takes is a collection of short stories that deal with the life of an Irish family as seen through the eyes of the women, along with some close female friends. This might limit its readership, but the writing in this is neither frilly, nor precious, nor overly feminine. It is gutsy and full of balls, telling stories of a world that is brutal and colourful. There is plenty of humour -laconically delivered – along with grace and skill.

McCarthy describes lives that could be that of any reader. If you are a mother, a sister, an aunt or daughter – or even if you’re a man who loves one of these – and if you grew up amid family chaos (who hasn’t?), experienced love and loss, self-doubt, feelings of exclusion or astonishing self-discovery, then this short story collection will strike many chords.

We are brought into the collection via the title short story. It is not a gentle entry. Tension simmers from the very outset, as we witness a woman who is not herself in a home that is being ripped apart, altered to within an inch of its life to hide the pain of a recent bereavement (the loss of an unborn child) in a line of several tragedies. There is tension in the marriage, and the husband’s grief is achingly revealed in his silence:

… Bill heaved away on top of me as if I wasn’t there, his head buried in my shoulder. And I lay still as he cried afterwards, big shuddering sobs on my useless chest, where the child should have been nursing.

It is evident that communication has broken down and that each character is enduring his or her own pain, but cannot share it. The loss is so keenly felt.   McCarthy often shows us the difficulty that Joan has in dealing with a world that does not deliver the one thing she dreams of having: a child. At times the truth is almost unbearably heart-breaking:

I’d prayed for a boy, and that was what I lost, seven months gone, nothing to do but go through with it, though he was already dead. I never got to see him: taken away and thrown in the hospital incinerator; no picture to hold in my mind of what he looked like; no grave to visit to mourn my child.

As if this is not enough, Joan – the narrator of the story – must travel home to Ireland to be at the bedside of her dying mother; a mother who has never forgiven Joan for moving away, and who still holds hope, even in her final days, that a grandchild will be conceived. On the boat to Ireland, Joan takes pleasure in the small children with their mothers, and thinks about her neighbour’s child, a boy who fills the void in her life.

At her mother’s bedside, back in Ireland, Joan reveals that she has brought back the christening gown that was sent to England; the gown that ultimately arrived too late. Her mother insists that she will need it soon enough, but Joan tells her mother that she and her husband cannot go through it again.

‘You can and you will,’ she tells her daughter, and: ‘It’s a woman’s life. What else will you do if you don’t have children?’

This exchange perfectly sets the tone for the rest of the short stories in this collection. Strong, iron-willed Irish immigrant matriarchs and confused, often lost, second generation daughters trying to break free and find their way in a strange world over the sea. Amid this turbulence they struggle to understand – or refuse to admit – the pull of their ancestry, the “duty” of their sex.

In ‘A Tea Party’, Maggie (who as it turns out is the protagonist that is visited most in the collection) narrates and tells us about her chaotic family, her brothers and sisters, her father’s mysterious liaison with a woman called Mrs Roberts. Often in the story, her father is represented by a donkey jacket – or rather the absence of it. This cleverly paints the picture of a hard-working, but frequently absent father.

But one week, after mass, Maggie has him all to herself and shares with him a secret, going for cake to Mrs Robert’s house and being allowed to play with the best china when her father went away to talk about grown up things with Mrs Roberts.

I particularly love the child Maggie’s view of the world in this short story, as she has such an innocence and matter of fact way of describing things, and some of them I remember from my own childhood – particularly the flying-saucer-like way her mother heated up her father’s dinner (on the stove with a plate on top of a saucepan of water, with another saucepan above that). Before microwaves this was how you did it, and the memory of my own mother doing it made me smile!

Some of the stories deal with the prejudice that the families, fresh off the boat from Ireland, face in their new country. The stares, the jibes at their accent, the mistrust they encounter at their innate humour and friendliness. England is not a tolerant place.

We learn of Maggie’s first sexual encounters in ‘Ruined’. She is leaving her boyfriend Graham behind in London for a while, because she is going with her family for a holiday back in Ireland. She wants to write to Graham on the train from Euston but wakes with a jolt at Holyhead with the letter unwritten. With him forgotten, she meets a new boy and falls for his charms. In her heart she wants romance, but the sad truth is that the boys are simply looking for sex. This short story highlights the differences that Maggie notices between London and this small place.

Everything was in miniature in Lahinch: a mini fairground, a tiny cinema.

Even their caravan was tiny, and with six of them..

… you had to pull the beds out at night – and when one person turned in their sleep, the whole caravan rocked.

Re-visiting various members of the same family, locked in different and various times of their lives, we witness iconic events through their eyes: the death of Elvis Presley, the Guildford IRA bombings. We see them struggling with sexuality, with the loss of friends, with illness of their own.

The last two stories (‘Self Help’ and ‘Combing out the Tangles’) are my favourite and the most emotionally raw. Throughout the book you become acquainted with the family members – particularly Maggie who was a standout character. In the penultimate short story we find her struggling with the burden of having to tell her mother (Maura) something. Maura is a hard woman and takes no nonsense. She comes to stay with Maggie and takes over the household – nothing is right in Maggie’s house and she wants to blitz Maggie’s kitchen, in the way that mothers are wont to do when they visit their offspring. As she cleans, Maggie battles the difficulty of imparting important news:

Maggie practised the words she needed to say in her head as her mother balanced on a stool, a bucket of water with a dash of vinegar in it on the ground.

We are left in no doubt about the awkwardness of their time together and it becomes clear that their history is one of non-communication. Maura has her way of doing things and will accept no alternative. Maggie seems powerless to do anything but stand and watch, but she thinks of her self-help book and how it advises her that

eye contact was the key to communication. The author had obviously never encountered Maggie’s mother, who tended to talk with her back turned.

She constantly thinks of the news she must tell her mother. She tries many times, but her courage disappeared below the stitched-up hole where the words were hiding.

McCarthy builds tension superbly in this short story, using the constant chattering of her mother about unimportant things, the obsessive cleaning, the many times the news almost comes but never quite makes it. But at the end of the short story, in a café together, Maggie finally makes eye contact with her mother. The hole in her throat opened up and the words came out.

I won’t give the game away, but the final short story wraps up the relationship between Maggie and Maura. Narrated by Maura, it is tragic, but executed with dignity. The shortest of the stories in this collection, it is nonetheless long enough to show the reader that this woman, the peg that has always held her family together, is not as hard as she appears.

This collection of short stories – fourteen in all – highlights the differences between the Irish and the English, but also the similarities; in a family of such extreme characters, both places are equally important. The older relatives want to cling on to the old country and the past, but the youngsters embrace their new world.

Ultimately, this collection shows that when every story has been told and it is time to say goodbye, love and family are all that matters.