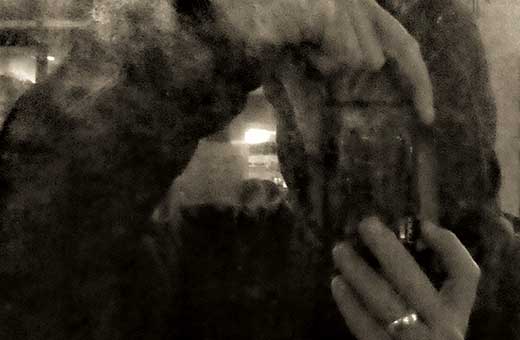 I remember the hills in Cleadon, insignificant, more mounds than hills, but in winter they drew us to them, dragging sledges, smiling, slipping to the top and sliding to the bottom, the thrill of the descent after the sweat of the climb, and a lesson in that at least.

The time I remember, it wasn’t snowing, but every day for the week before there’d been white on white on white. The covering on the slopes was hard, with a glint to it from the early sun. I was with my brother, and there were hardly any others up so early, so we had a free run, he first, me following, and we spent an hour – still before nine in the morning – on our favourite part of the hill.

It was his idea to try the steep slope. Two years younger, but always more hardy – always more everything – he said nothing, just smiled, and dragged his sledge up to the trees at the top. We had watched the older boys over the last week flying down to the wall at the bottom, rolling off before their sledges hit with a smash. Most didn’t break, but some did, and it had become a badge of honour amongst them to carry the pieces back to the top of the hill.

And he was off, headfirst. The sound of it was beautiful, quiet, almost nothing, a hush of speed, diminishing, gone, and I watched him, the roll, the crash, his laughter. He picked up the sledge – it was tough, wooden slats, steel runners, and it seemed to have survived – but instead of starting his ascent, he beckoned me, silent, nodding.

Sometimes I think I have never moved from that spot. But I did. I pushed myself forward, but as soon as I gathered a little pace I hung my legs over the side of the sledge, dragging my feet against the packed snow. I rolled off a long, long way from the bottom. My sledge hardly made it to the wall, and when it did, it came to rest with a bump, nothing more.

My brother carried it to me, handed me the rope. He said nothing, just smiled, and we walked back over to the slower slope, the smaller climb, where we stayed for an hour as more friends arrived.

Soon, what had happened on the big slope seemed lost in the chaos of the morning, but some things can never be lost, some things don’t pass like the seasons, but stay, harden, packed down together with other memories, other small failures, and always there is a child standing at the top of a slope, frightened, making a choice, deciding to do, but not to do with any conviction, and there is a life lived in the wake of that moment which could not have turned out any other way.