Recently longlisted for the prestigious 2017 Edge Hill Short Story Prize, Vertigo (2016, And Other Stories) is a collection of short stories by Joanna Walsh.  Written in the style of short vignettes, almost like individual micro fictions in themselves, Walsh appears to be heralding a trend in the short short story format, which has seen writers pushing boundaries, developing the form into novellas with connecting flash fictions, for example, or memoirs in the form of short life writing flashes.

Walsh’s narrators are a collection of women, written with the effect of disparate streams of consciousness, baring their souls, whilst often going about seemingly mundane activities. The modernist prose, stream of consciousness style gives a poetic feel to the collection.

The narrative voice could easily be the same women appearing in different guises and at different points in a woman’s life, playing different roles, though I’m not sure this was meant to be the case.  In this regard, it reminded me of The Bed Moved, another collection of short stories recently published by Rebecca Schiff, in which a young woman, or women, take the reader through the difficulties and situations faced by young modern women. 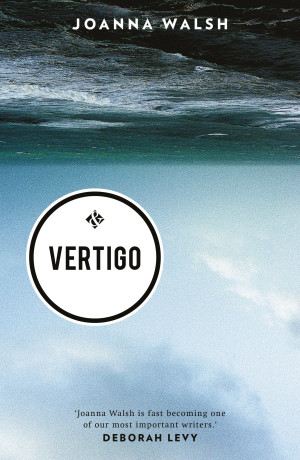 Walsh takes us through situations which feel relevant and cohesive within women’s lives, exploring the roles we play of mother, daughter, lover and wife, in a way I haven’t read before.  As the women travel through roles, countries and languages, there is an underlying feeling of panic, of foreboding, fitting with the title of the collection.  Each time the narrative shifts, it felt almost, to me, as though the next woman was born of the previous one.  Though there is an overarching sadness within the narratives, there are also moments of light and shade.

In the title story ‘Vertigo’, Walsh plays with narrative nuances, switching between ‘you’ – as though speaking to the man in the story – and ‘he’. It then also moves to italics, giving a third person commentary She felt no vertigo. Despite this, the device worked, creating an interesting perspective.  This story brings up the concept of women’s sense that they have, as Walsh’s narrator says, no anchorage, questioning the role of woman as wife and mother.  There is a general inevitability to the story when she says she has merely learned only how not to want.

Mother/daughter relationships come under scrutiny often. ‘Claustrophobia’, among others, explores the relationship between a mother and a grown up daughter, and the way we easily fall back into old habits in family relationships.  The story is set up in an interesting way, beginning with ‘Minus 1 Year’, and informs the reader ‘in the house of women, everyone is losing it’.  It shows the often complex relationships between older daughters and their mothers, exploring the things often left unsaid.

Another theme threading the stories is a meditation on ageing, in such stories as ‘Fin de Collection’, when the narrator says To other people, perhaps, I still look fresh.

Though the stories are short, there is a lot packed into them.  I also found some of the collection achingly sad, though perhaps it is meant to be.  This particularly resonated in ‘The Children’s Ward’, where a mother is awaiting the outcome of her child’s operation. When the staff refer to her simply as ‘Mum’, she says I looked around for her but she wasn’t there. I think Walsh is drawing attention to the invisibility of women – the annihilation of self that often comes with motherhood, and I felt there were several examples of this throughout the collection.

That isn’t to say there aren’t elements of humour, however.  Some shafts of light poke through, such as in ‘Half the World Over’, where the narrator tells us There is nothing to do with this time but put some alcohol into it, making it impossible for you not to warm to her.

‘There is often a feeling of hopeless passivity on the part of the narrator, perhaps reflecting the role of women in society.’

The standout story for me was ‘Young Mothers’, in which Walsh, amusingly, makes the connection with the way new mothers morph into the children they are raising, contrasting the clothes the pregnant women and mothers wear in relation to their offspring.  These are portrayed as bright and easily washable, eradicating the woman’s former tastes, her personality and sense of style.  Once again, there’s an indication of the annihilation of the woman into the role of the mother.  She also cleverly makes connections between a child’s first day at playgroup with the mothers trying to make friends with other mothers for the first time.  I thought this was an original take on new motherhood.

The final story of the collection, ‘Drowning’, feels like the story the whole collection has been working towards; the point when that sense of dread culminates. A woman who is a mother and wife swims out alone into the sea whilst holidaying, away from her family, reflecting on her role once the holiday they are on is over. The narrator’s voice in this story reminded me of the novella The Awakening by Kate Chopin.

As I said before, there is an over-arching sadness resonating throughout these stories, peppered with some lucid moments of prose, together with an unnerving sense that the woman narrator was about to fall through the cracks and disappear altogether. I think this was possibly Walsh’s intention. There is often a feeling of hopeless passivity on the part of the narrator, perhaps reflecting the role of women in society.  It will be a book to return to, re-reading and re-digesting the meanings beneath the stories.

Walsh, who has previously published creative non-fiction, brings a fresh perspective to short fiction with this collection.  With a growing trend toward micro fiction and flash novellas, this book feels right at home, and many of the pieces felt like life writing flashes.  It is interesting and exciting, as a short story reader and writer, to find authors pushing boundaries and developing the art of the short story into new areas.  The whole collection feels modern, fresh, and alive.

Kate Jones is a freelance writer based in the North of England and has published features, reviews and essays in various places online includingThresholds, The State of the Arts, The Real Story and Skirt Collective. She has a passion for the short form, and has published many of her own flash fictions in places such as Spelk, Firefly, SickLit and Café Aphra, as well as winning the quarterly Flash500competition and three times winner of AdHoc Fiction. Her writing has been nominated for a Pushcart Prize.