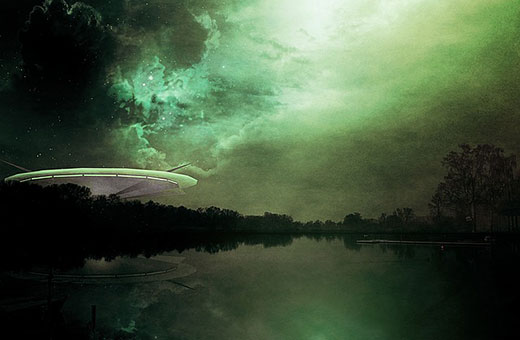 One night, a giant, elliptical spaceship hovered over a sleepy village. The authorities were freaked out by the appearance of a silvery flying saucer, mostly because the aliens demanded, ‘Give us your valuables! Treasure! Treats and puddings!’

People began to send their valuables and whatever puddings they had, but the aliens would always reject them (except the puddings). Brass, copper, silver, diamonds, zinc and lasagne – all NO. Apparently these things are abundant on the planet Borjk (they even have space lasagne – look it up). Eventually the aliens gave a threat: hand over the perfect material, or get exploded. BOOM.

Just as the military were getting ready to sock it to the aliens, a young girl called Jessie asked if she could try to please the aliens. Jessie stumbled timidly towards the microphone. ‘Oh mighty alien lords, there is a very valuable material that the adults have not told you about it. It is so precious they hide large amounts in the sea. It is called…PLASTIC. Gaze in wonder at PLASTIC,’ she said, brandishing a plastic bottle.

‘This wonderful stuff comes in many forms – from thin and paper-like, to strong enough to withstand bullets. It can be moulded into many shapes, and when damaged can be reformed. This material is expensive as well. Every minute, one million pounds is used to buy plastic. Take it! Take it all! Take it back to your planet!’

The aliens listened (well, apart from one that was trying to learn how to eat sticky toffee pudding without getting it stuck to his mouth). They were pleased with this answer, and used their tractor beams to lure 12.7 million tons of plastic from oceans, seas and lakes all around the world, and disappeared into outer space never to be seen again (apart from when they come round every month or so to have some more earth puddings).

Finn Champion wrote this story when he was ten years old. Finn lives with his family in Abingdon, Oxford.

For the first tine in five years, TSS is currently accepting submissions from children ages 6 – 18. Read more and enter your own story. Accepted writers are paid £15 via PayPal.

Older readers and writers may be interested in the Cambridge Short Story Prize 2020 (prize fund of £2,350) which is currently open to submissions.