“You’ve put on weight,” he said at the bus-stop one winter morning, sliding his arm around the padding of her coat sleeve and jumper. She didn’t know whether to laugh, explain or take offense.

“Let me touch your face,” he said, releasing her arm and feeling the air with his hand, “I’d like to know.” It had been about six months by then, it would seem rude to refuse. She brought her head closer and adopted a passport expression. Tried not to frown as he patted about with searching fingertips, unsure what the feel of her face might look like. His spice breath brushed her cheek. She remembered she hadn’t washed her hair for three days.

“We could go on a day trip,” he said, a few days later, “take the bus together.” “Perhaps,” she said, glad he couldn’t see her eyes.

She walked a different route after that, or slowed her pace when she saw him ahead. It wasn’t really inconvenient. A change does you good. There are plenty of other people around. 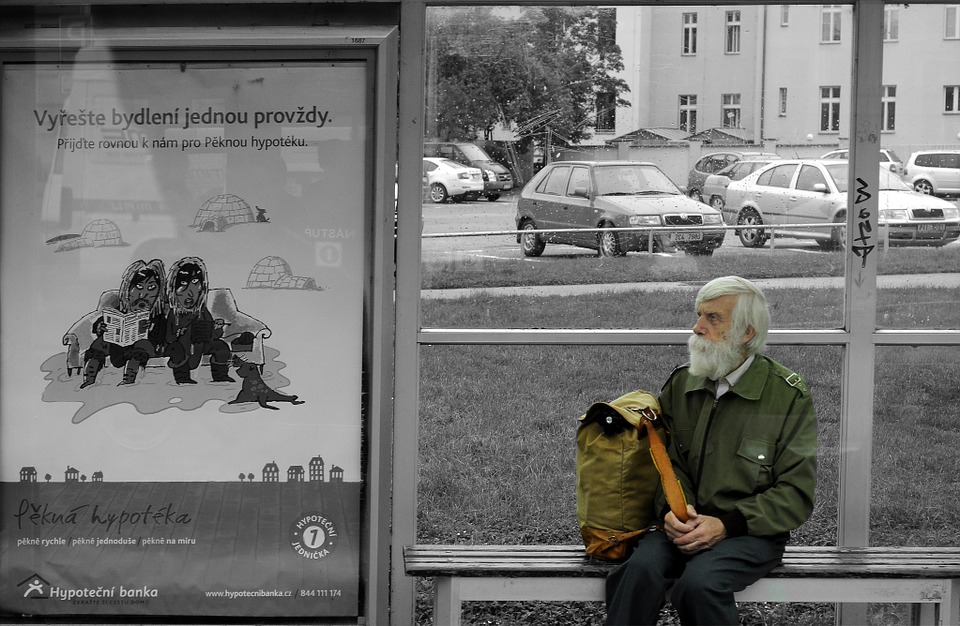 She passed him regularly from the top of the bus. Looking down at the hint of a shine, she’d instinctively touch the back of her own head. She wondered if he’d ever seen himself. She could have described him, if he’d asked. From the outside anyway. The way the lines on his forehead dipped down in the middle when he smiled, the curve of his shoulders from hunching into himself.

When he stopped appearing at his regular crossing spot next to the bus-stop, she thought he’d gone away, visiting perhaps. Did he have relatives? Where was he from? Later she grew uneasy. The bus journeys rattled on, the same squashed front gardens, the same prismatic living rooms, but still no white stick pirouetting over the edge of the pavement.

She started to enquire of people in the street, local shopkeepers. Sketched an imaginary circumference around his old roost but there were too many houses in the resulting catchment area to go door-to-door. She didn’t know his name. His absence weighed on her. She began to fake errands, ignore buses. Being indoors was an opportunity missed, the street always beckoning. People whispered now, dropping their eyes. She was affronted when someone else stood in his spot, gratified when they shuffled away under the belligerent stare of the self-appointed pavement police. Sometimes she closed her eyes and touched her face, tracing the path his fingers had taken. She kept her hair clean, that at least.

His reappearance one late March morning, blown in with the Spring, was as unremarkable as a gate swinging open in the breeze. He looked smaller than she remembered, grey under the extravagant pink blossom clustering above his head.

She checked in her handbag for her bus pass, fumbling with the catch. Fluffed at her hair, straightened up and began moving towards him. She noticed a faint squeak from her left shoe. She hoped he wouldn’t recognise her footsteps as she walked past.

Linda Grierson-Irish lives and works in Manchester, UK, and is fairly new to the all-consuming lure of writing short and flash fiction. Her story ‘Thin Air’ was included in Flash Frontier’s online June issue, and she has been longlisted and shortlisted in several other competitions. She is currently undertaking a 6 month part-time writing course.