Featured Flash Fiction: ‘Of Bugs and Men’ by Jacqueline Haskell

They are in a box, his friends – and they are his friends, his only friends; safe inside they scurry beneath its flaps, corner to corner, antennae twitching, waiting, waiting only for the dark. 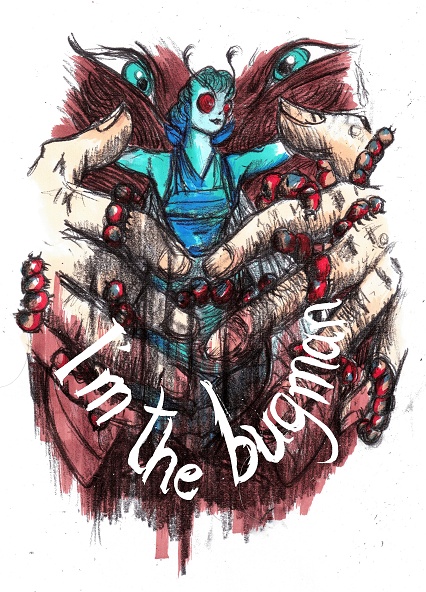 ‘Bug, bug, bug at the ugly bug’s ball,’ chirped his Dad, when Gordie was but a child, lifting him high across the breadth of his shoulders, mocking the fluffy yellow and green caterpillar that fell to the ground in one great ark of wailing colour; Gordie’s floury toddler hands flailing in the air, grasping for it, sweat leaking through his fingers.

‘I’m the bug man,’ whispered Gordie to the cooing-giggling girls in the playground, with a flash of his sly pied-piper eyes, pushing the tiny insects under their collective noses. Fascinated, the giggling girls had their arms around other boys, destined to become sleek, muscled amours – the Deanos and the Ignacios of the town – but oh how they loved Gordie: oh how they loved to befrightened.

And it is the Deanos and Ignacios who pay, of course, when he catches the roaches that slide beneath their hobs and crawl from their power sockets, but it is the women who thank him; the women who bake fondant-iced cupcakes for his tea – blue and green and gooey with hundreds and thousands and pert butterfly wings that open and close around his lips as he bites into them.

He lays out rows of bugs before him like armies.

He keeps only the first bug from each street, each villa, each woman. First bug, first love. Winter 1996, 1325 Laburnum. Spring ’97, 1426 La Quinta (twice, no three times that one: fumigation, gel, traps and on into the next season and the next. The wet heat brings them out – always. They sprayed the streets but nothing worked that year).

‘I’m the bug man,’ he says and in his dreams he leans them back, those women, against their washer-driers, their poolroom filters, their fridge-freezers, balancing their bodies so they don’t mind his size.

He hardly needs to but he does it anyway.

He opens one box, two, more, and gives them their freedom, his bugs, pours them into waste pipes, main drains, the run-off from shiny kitchens.

Oh but this latest job has such promise! He’s been watching the woman, the lady of the house, waiting for it to happen, for her to spot that first bug.

Here he is on La Quinta again, engine idling, waiting for her call, waiting to hear the tremor in her voice, to imagine the slight widening of her blue-black Spanish-Spaniel-eyes.

Around midnight, her cold kitchen and a marble floor. He settles himself with a pillow, two, thoughtfully provided by the lady with the blue-black eyes, and lowers his ear to the soap tray of the dishwasher, straining to hear through the mesh, where his bugs murmur to themselves in the dark.