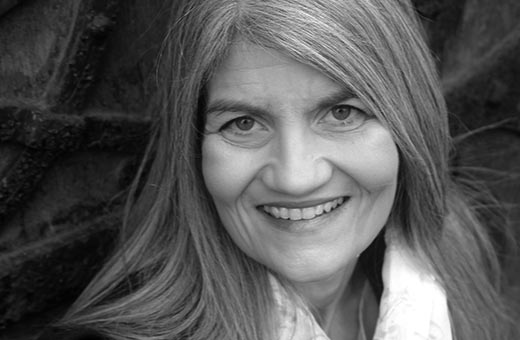 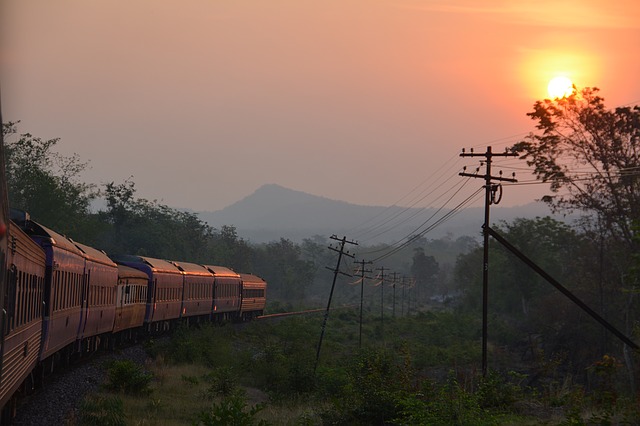 Robert can barely breathe inside the huddle of elderly ladies in the clattering carriage. It makes him anxious, but their nearness is also a comfort. He has lost his glasses. It is like seeing everything through the brown water in which children rinse paintbrushes. He could pat the ladies’ coats in case his glasses have landed there, but strangers never touch, not on purpose.

Behind Robert, older boys and men are talking. He should attract their attention. But he is afraid of talking to anyone except his mother, nourishing her with memories of his father while boots rap on the pavements outside.

His glasses might be underfoot, rattling about on the floor of the rocky train. Everything and everyone must be somewhere: his cat, who goes roaming for days, although she always comes back; his favourite teacher who left school suddenly and they all decided she must be having a baby; his mother, her face shrivelled like a nutmeg, darkened by grief.

The old ladies in the carriage are probably staring at his face, bare without its wire framework, and at his eyes, exposed without their heavy lenses. He won’t be able to polish them when they turn up. The duster he usually tucks into his belt disappeared a million miles back. No one will notice a blue square of cloth streaked with grime. If they do, they will see only a tattered rag.

The old ladies in here are from the Home, a glossy red building near Robert’s school. He knows them, but he doesn’t really know them. Three times a week he walks across the road and helps serve their dinner. All the pupils have to volunteer. No one slips through the net.

But no one is serving them today. They are all here in the carriage, the old and the young. No one serving and no one eating.

The sun always lights up the red brick of the Home, but lately it has stopped cheering the residents inside and when Robert ladled out their rabbit stew last week, the ladies spoke in dismal tones about the decline of their city. There were other, hushed remarks, conversations in eclipse. 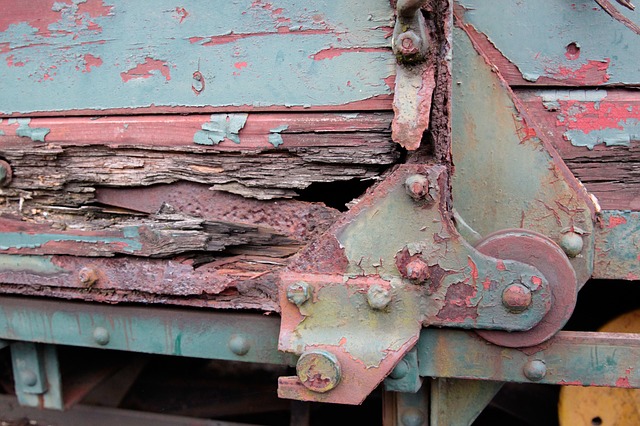 The train gathers speed, wheels gnashing the track, the carriage swaying and clanking. No one talks. There is a rasping noise, louder when the train is cantering fast, quieter as it slows.

Something is working loose.

Robert is penned in, breathing stale embrocation and perspiration. If he makes the slightest movement, the smallest stretch, his glasses might be dislodged and fall. He has never dared speak to an old lady before, slopping out the stew without meeting their eyes. They may ignore him now, the way he has ignored them.

“Have you seen my spectacles please?” he whispers.

The only reply is the roar of the quickening wheels on the track.

Robert reaches out, touching the coat on his right. The lady does not shrink from him.

The train decelerates. The scraping sound is amplified, then falters.

The ladies stiffen, as if to query the pause, the unexpected silence. A long time passes. It could be hours. Robert is thirsty. Perhaps they are about to pull into a station, where he could climb out to stretch his legs and find a water fountain. But he guesses the train won’t stop at a station.

When the guard shouts from the booth behind the carriage, the train accelerates and the ladies lurch, bumping gently against each other. The grating begins again.

“Fault in the workings,” Robert expects the men and boys to mutter.

But they say nothing.

At home, an old pair of his spectacles is tucked inside an old sock which belonged to his father, in a drawer maybe, or in a pocket. Everything and everyone has to be somewhere: his spare glasses in the sock; his cat who may never find her way home; his mother in the next carriage, separated from Robert because everyone was bundled in so fast.

A tear sits on his cheek, close enough for his left eye to focus on it. And because he is thankful to see something—anything—with clarity, a second tear joins it.

The train jolts, stuttering out of time with the scratching. A second before the rhythm settles again, a splitting sound tears through the carriage. 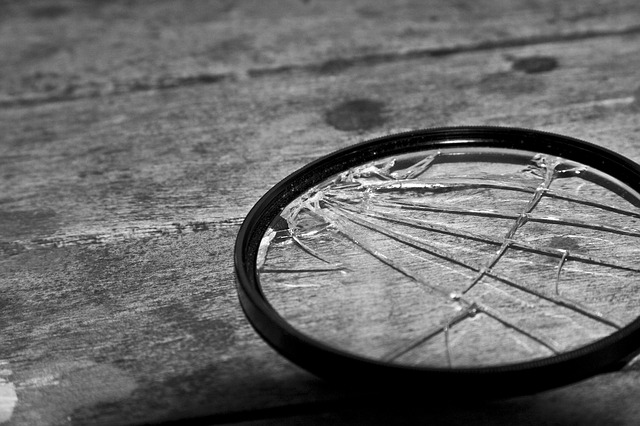 Robert lets out a gasp that sounds as if it belongs to someone else.

Fingers folds over his hand, the skin as crisp as old paper. A soft handkerchief is dabbing his face. He releases a shaky breath.

“I’ve lost my spectacles,” he says, his own voice unfamiliar.

The ladies hear him.

They are too elderly for stooping. In any case, the carriage is too cramped. But they try.

“There is broken glass beneath my feet,” one of them says.

“Sorry,” they all murmur.

The lady on Robert’s right smells of diluted rosewater. She squeezes his hand. Behind them, the men and boys give a muted cheer. Excited conversation follows. A voice is saying, “Here. Pass it on.”

Another says, “Hand these to the young man.”

Something is given to Robert. 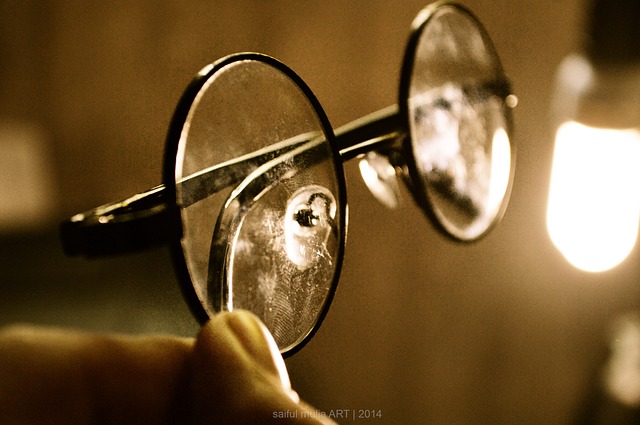 A pair of enormous, smeary spectacles.

Although it is difficult in the crush, the lady beside him ties her hair ribbon to the arms of the spectacles and winds it round his head. Another knots the ribbon into a bow. He waits for the men to jeer, but instead there is a muted hum of encouragement.

Robert nods. Yes, fuzzy shapes. These lenses are weaker than his own. He squints until his eyes ache, but nothing clarifies. The people packed into the carriage are spectral outlines.

The old lady to his right peers at him. “Try these,” she says.

Her glasses are small enough to fit him well. The lenses, thick and magnifying, are as strong as those he has lost. They bring the world back.

Now the men want to show him something.

They tell him to move away from the ladies, towards the side of the carriage where the scraping sound has just stopped.

“Come over here with us,” they keep saying. “Quickly. There’s not much time.”

“When should I give your glasses back to you?” Robert asks the lady, the fear of losing his vision again spurring the courage to speak.

The old lady smiles. “Keep them. I wish you many years of clear sight, young man. And I pray you grow as old as I am.”

The train slows down.

In the confined space, the ladies clasp their hands over his own.

He would reach up if he could and touch the softness of their silver hair. In the splintered light, their eyes are the same deep-brown and olive-green as the mountains racing in darkness past the train. Robert wonders if his mother will forget the colour of his eyes. He cannot remember hers. People never think about these small details until they long to remember.

“Make your way towards the light, but don’t venture into it. Keep looking, but stay hidden,” says the old lady who has given him sight.

She reminds him of a bird in winter, the pulse of her heart larger than her body, bursting through cataracts and crumpled skin, through the clotted veins in the fingers she places on his lips to remind him to stay silent.

“Everyone’s life will take them somewhere,” she tells him. “But those who are caught must look for holes in the net.”

“Why don’t you escape through a hole?” Robert asks. “You’re small.”

“Only the clear-sighted can find them, my dear,” she says.

Robert has no idea where he is going, hurtling through nowhere to nowhere else, his mother clustered with a hundred other souls in the next carriage. His father has been taken so far from home he exists only in the pieces of memory Robert has unearthed for his mother at night.

Robert pushes through the crush in the carriage, tripping over the overflowing bucket of their waste, towards the broadening rectangle of daylight, towards expectant faces.

His destination is unknown, but all that matters is that he has it.

The men have waited for the track to curve, for a long shadow to be cast.

One of the old men is mopping his brow with Robert’s blue duster. Robert reaches for it, but withdraws his hand. At least he has given something.

He can discern a schoolfriend’s father and another’s granddad among the tired strangers who deliver him through the hole. But there is no time for recognition. The past has already fled by in the fast, hot steam, and along the length of the hissing tracks, and in the smudges of the distant mountains.

Robert leaps into the darkness.

He waits in the cold night, his heartbeat matching the thud of the locomotive as it pulls the cattle train away, wooden box after wooden box.

The funnel hisses, the track shudders. 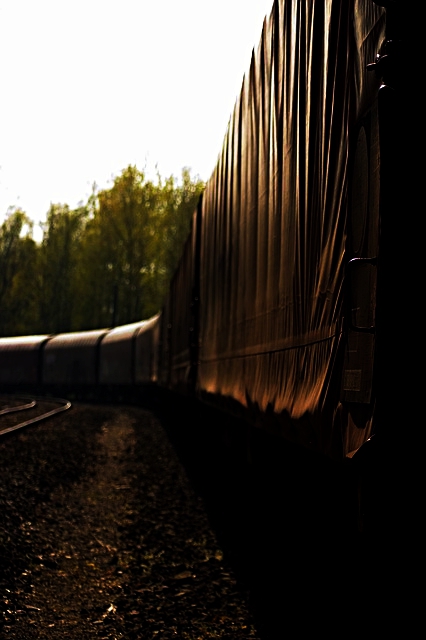 If this is the end, his final memory will be of the men who found a flaw, a fragile slat below the window slit in the flank of the carriage. With a sliver of nail file hidden beneath a coat, they took it in turns to carve a gap, a beautiful gap, large enough to fit someone slight, someone agile, someone young enough to take a chance.

The train thunders into the night, disappears.

No more shooting. No shouting.

He must run into the deeper darkness to hide until he is able to see his way. But it’s impossible to work out which way he is facing. The thrust into the fresh air must have tilted his glasses askew.

The ground is vibrating.

He has to concentrate. His friends on the train have given him a gift and he must treasure it. They marked him out as special, the one who might be saved. But what if he is not fit for the task?

He touches his head, touches the ribbon, but the ribbon is all that is left.

In the first cold light, his eyes will be no more help to him than they are now. All he has left is the rest of the night to remember his mother, knowing she must be somewhere. The cattle train might yet be taking her somewhere safe. He prayed she would still be alive tomorrow.

All he can do now is unite with the darkness, where everyone merges into the same infinite dark pool, knowing without doubt his mother is sending out the same prayer.

Joanna Campbell is a full-time writer from the Cotswolds and her short stories have been published in a range of literary magazines and in anthologies from Cinnamon Press, Spilling Ink, Earlyworks Press, Unbound Press, Sentinel Publishing, Gumbo Press, Chapter One Promotions, Leaf Press and Biscuit Publishing, as well as The Salt Anthology of New Writing 2013, the 2013 & 2014 Rubery Book Award anthologies and Bristol Short Story Prize anthologies. Shortlisted six times for the Bridport, three times for the Fish Prize, she also came second in the 2011 Scottish Writers Association’s contest. In 2012 she was shortlisted in Mitchelstown Literary Society’s William Trevor/Elizabeth Bowen competition and runner-up in 2013. Her solo collection was also shortlisted for the Flannery O’Connor Award. Her stories have won the 2011 Exeter Writers competition, the 2013 Bath Short Story Award Local Prize and the 2015 London Short Story Prize. In January 2016, Ink Tears published her short story collection, When Planets Slip Their Tracks, which was shortlisted for The International Rubery Book Award 2016.