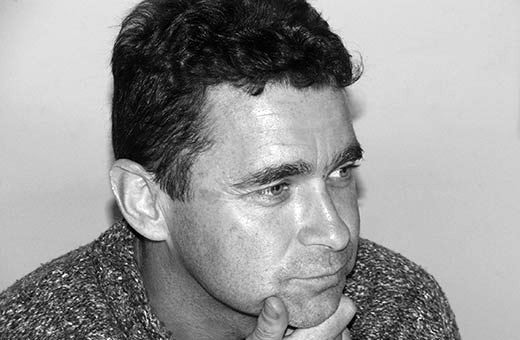 It’s the air that hits, immediately you step through the door. The throat gags, just like the last time, and the first time. It refuses the tepid disinfected atmosphere on which floats a spoor of incontinence.

They must steam all the food in here.

Past the nurses’ station, down the corridor already familiar. The marigold and lilac, the jaunty murals as if it’s all a parody kindergarten. Past the shadow figures, their mouths agape.

The room at least has some pretence to normality. A private ward in a hospital, say. Her own books. Her photos. She has the television up loud, and is dozing in the armchair. You touch her shoulder. ‘Nana.’ Eyes flicker. They look up, fail to focus. You lift the remote from the tray, mute the gameshow. ‘Come on, Nana. We’ll get you out of here.’

Her eyes are still refusing to focus. Days, she drifts into some nebulous land where words have lost their value. Others, she’s her old self. Her young self. ‘Is it cold?’ she asks. She’s pulling a gargoyle face. ‘Not so bad.’ You’re rummaging through the flat-pack wardrobe, picking out a hat and the warmest shawl. ‘It’ll do you good to get a breath of air. Blow them oul cobwebs away.’

It had been a shock, seeing her in the hospital ward. Not so much the rhubarb and custard bruising, the fledgling head, the one blooded eye, the ragged breath, the wheeze and drain of the tube at the corner of her mouth. It was how frail she’d grown, how tiny beneath the counterpane, as though the seven years in which you’d failed to see her had all at once caved in.

Loraine had phoned London, for the first time in months. So Nana must’ve gone wandering into the small hours. She’d been struck by a taxi. No, nothing critical. Bruising. A punctured lung. She’d had the call from St Vincent’s at half five in the morning.

Loraine hadn’t expected you to fly back to Ireland but you had. You’d had to.

‘Not a nursing home,’ you’d told her, later. After the shock of the encounter; the rebuke of it. She’d chilled a bottle of Chablis in her fridge, a concession to your visit. Neither glass had been touched. ‘Anything but a home, Lor.’

‘You’re not listening,’ she said. ‘The hospital won’t let her go without a discharge plan. Blathnaid, they won’t let her live in the house anymore, end of.’

‘Huh! So what are you suggesting? You’d move back, is it?’

You were twitching for a cigarette. Loraine had placed a saucer-ashtray on the kitchen table, another concession. To buy time you lit up, drew in, tried out a grimace. ‘If you saw the kip where I’m stopping these days…’

She flinched upward, indignant. ‘This is about Nana. With all respect, this is not about your youth slipping away!’

The venom stunned you both. ‘That’s not fair, Loraine.’

Something akin to remorse puckered her brow. ‘And you’d be prepared to stay in?’

‘Because that’s what it would mean, Blath. You’d need to be there twenty-four seven. You couldn’t just … go out of a night.’

You exhaled a slow orchid upwards into her domestic interior. ‘There’s other options.’

‘Yeah. There’s home help. There’s…’ You sensed she was waiting for something to occur to you. You glanced toward the baby-chair, the crate of coloured plastic, the crayoned Mammy under the fridge magnet, and you stabbed the cigarette into the saucer. ‘I mean she seemed pretty lucid when I was in there.’ You hoist a grin. ‘So I tell her I must get home more, not just Christmas like. And Nan makes a joke out of it. She goes “You know where I live,” then adds, “which is more than I do half the time!”’

A diluted smile. Maternity has made her immoveable. ‘In fairness, you haven’t been here. Half the time, she doesn’t even know who she is anymore, let alone anyone else.’ She’d donned her old expression of I know more than either of you. A drop in tone, as though she might be overheard. ‘This was not the first time she was found wandering.’

And that was that. By the time you’d organised your stuff and moved back from London for the second time, Loraine had already lined up the nursing home.

There aren’t many strollers out on the promenade. A bleary sun, a chill wind coming down off the Head chasing litter in circles. Even under her tartan shawl, the Kashmir, Nana looks perished. You hurry the chair along in the direction of the coffee shop.

Once inside the warmth she shudders Brrrrrrrr!, her eye quick as a bird’s. It’s too early to say how lucid she is, though. Nana has grown jokey with the years. ‘Behave yourself now Peggy!’ the male nurse had called after her.

‘What will I get you Nan?’ She scowls at the stranger who has asked. All her life she’s had coffee, strong as a double-espresso, even last thing before going to bed. ‘My caffeine fix,’ she’d call it. Coffee at night, and a bottle of stout before dinner. There was nothing Loraine could ever do or say to moderate that regime. Do they still let you have a bottle of stout, Nana?

You return with two filters. The shawl has slipped from her coat-hanger shoulders, but some glow at least is returning under the cheekbones. ‘Have you a cigarette?’ she squints, not quite disclosing if she’s recognised you. When you were still in your teens, you used to have sneaky cigarettes together behind Loraine’s back; Loraine, who was only four years older, but who’d grown up a full decade before you had. After the accident she’d had to.

You look around, for support. ‘Coz it’s the law!’

Loraine needed your signature. That, too, was the law. In order to secure power of attorney, she’d have to get your consent; or at the very least, you’d have to offer no objection during the time stipulated in her lawyer’s letter. And you’d told her you’d be damned if you’d give her power of attorney over Nana’s estate as if she were already dead or crazy.

‘What are you afraid of Blath? You’re afraid I’ll sell off the house, is that it?’ You were full sure she was on the point of adding when we both know Nana will never live there again. But she didn’t. She always had the capacity to surprise, Loraine. Instead she said, ‘Legally, I wouldn’t be able to, even if I had a mind to. Which, by the way, I don’t.’

‘How do you figure that?’

‘The government scheme doesn’t allow it. We can’t touch that house while it’s being used to help pay for the care.’

‘I don’t see why you signed up to that bloody scheme, I declare to Christ I don’t.’

‘Because, my dear, we’d have to stump up a grand a week if we didn’t. You got that sort of cash lying around Blath? Because I don’t.’

Cash. It was always a sore subject. Nan had run a frugal dress alterations business from the front room in order to keep the house after the granddad you’d never known had disappeared. In trilby, coat and scarf he’d gone down to the bookies one Saturday the same year you were born and had never returned. Loraine said you’d inherited his itchy feet. When the car-crash had thrust two orphan grandkids upon her, Nana was already sixty.

She blanched. ‘You’ve some nerve! You think you can just swan back home after seven years like some… prodigal…’ You watched her contained fury balk at the choice of noun. Bitch? Opportunist? She’d called you opportunist after she found out Nana had emptied her entire Post Office account to fund your acting course over in London. You’d asked for a ten thousand loan; she’d gifted a sum closer to thirty.

But who was the opportunist now, Loraine?

Nana is cupping her hands about the coffee as if it’s a stove-pipe. Her eyes are slanted and mischievous. Times like this, you think you could live together in the house, make a go of it. Eleven different addresses in seven years and you’re sick to death of it. She’s shaking her head slowly, as though she’s overheard the idea. ‘What, Nan?’

‘Tsst,’ she’s pulling a face at your crew cut, ‘you’ll never get a husband that way Louise.’

Louise, your mother. You scarcely remember her. But the communion photo of her might have been you. You touch your scalp, softly downed. ‘I’m in no hurry to get married Nan.’

You’re wrong-footed by the sharpness, both kinds of sharpness, and for a moment you forget. ‘Thirty…two?’ you enquire. Old enough that a lot of the best rolls are slipping away.

‘You look more,’ she says. ‘I don’t know why you wear that monkey-jacket when I got you that lovely tweed coat with the fox-fur collar.’

‘What coat, Nan?’ But she’s away into some argument she’d had with her daughter years before. The ancient paradox: as she’s grown older, her memories have grown younger. You touch her fingers, ice-cold chicken-bones. You prise them from the coffee cup, rub them. ‘I need you to be here with me, Nana. I need you to remember. Did Loraine have you fill out a bunch of forms?’

‘I never cared for that Freddy,’ she scowls. ‘Too flashy by half.’ Fred Nuzum. Your father. And perhaps she was right. It was a single car collision, the convertible wrapped around a telegraph pole late one Saturday night.

‘Nana, please. It’s me. It’s Blath. Nana, did Loraine have you fill out a bunch of papers for the government?’

Back outside, into the convalescent sunlight. ‘I’ll have that cigarette now,’ she says. When you light it she sucks greedily as an infant, the smoke forcing one eye closed. ‘We’ll get you back.’ You push the chair to spare the battery; also because she’s still uncertain with the joystick.

Back into the nappy smell. Once inside, she insists on manoeuvring the chair; a show of independence for the other inmates. It beeps intermittently, like a truck reversing. The male nurse is all smiles. ‘Well, Peggy, did you have a nice walk?’ And, as if behind your back, he signals with a wink a sneaky cigarette.

It comes to you like a sucker-punch: she’s happy here.

At the corner of the long corridor the chair halts, and you watch her hat tilt back. ‘Don’t be too hard on Loraine,’ she calls. ‘Sure she does her best.’

David Butler is a poet, playwright and novelist, David Butler’s most recent novel City of Dis was shortlisted for the Kerry Group Irish Novel of the Year, 2015. His short story ‘Taylor Keith’ won the Fish short story prize in 2014 while his play Blue Love swept the boards at the Bray One Act earlier this year.