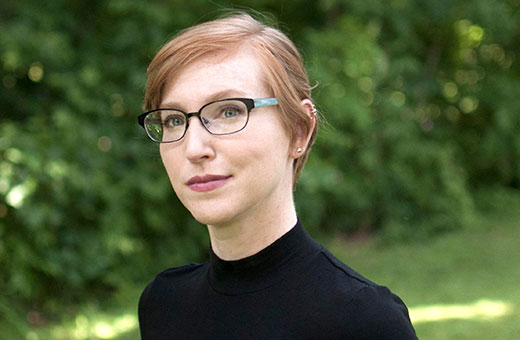 She had a kid. It’s important to say it like that. She shouldn’t tell people she made a kid as if she produced it on an assembly line. Rather, it’s understood that you’re subject to a kid by circumstance. You have a kid the way you have a cold, have menstrual cramps, have chills, have a hot bath with Epsom salts, a washcloth shrouding the face. Have a lie-down, a lovely childhood, an unexpected death in the family. Have dinner with a boy whose father is friends with your father and all night have an itch in your nose from his cologne. Have sex, have an orgasm, have a good time, a euphoric revelation, and when that passes have second thoughts, a cry, a conniption. Have a breakdown.

This she understands about having things: some occur but are not kept, not in the way people mean when they ask if you have car insurance or a personality disorder or a secret. Some kids occur and are kept. That’s what people actually want to know when they ask the question. When she goes out with men, they ask the question in the plural—“Do you have kids?”—as if they assume she had and kept at least two. Or maybe this is to avoid the awkwardness of the singular alternative—“Do you have a kid?—which could suggest these men assume it’s excessive to have and keep more than one. That assumptions could hurt someone’s feelings.

This man, her current date, ingeniously blows past both of those entanglements. He sweeps a theatric hand and asks, “Do you have offspring?”, which makes her think he’s on the spectrum; his jokey formality feels rehearsed. She doesn’t hold that against him. The fearless biology of his word choice is refreshing. Do I have offspring? Have I spawned? We are animals. We are salmon.

There’s a fish that reproduces by cloning. This man seems like a knowledgeable person, so maybe he’d be able to tell her which fish it is. Maybe he’d prefer to answer that question, because the answer to the question he’s asked requires clarification, a moment when she dries up like a lotus pod, becomes a thing of hollowness and gaps. This man could stick his hand in her, rattle her around until she says it.

Jen Julian’s debut short story collection, Earthly Delights and Other Apocalypses, was the winner of Press 53’s 2018 Fiction Prize. Recent fiction has appeared in or is upcoming in Wigleaf, Milk Candy Review, X-R-A-Y, Okay Donkey, and SmokeLong Quarterly, among other places. She and her fluffy ginger cat currently live in Georgia, where she teaches English at Young Harris College.