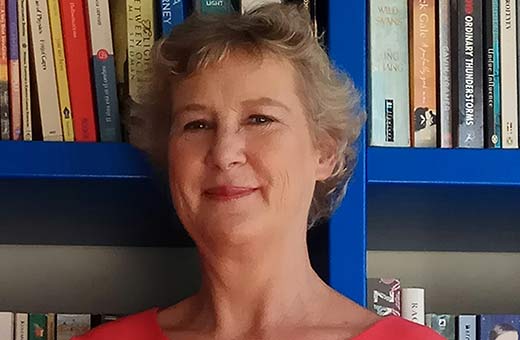 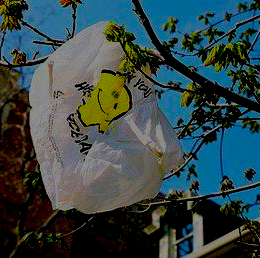 Millie’s eye was caught by something wild fluttering at her window. It was a supermarket plastic bag that might have been full of groceries for someone’s supper – meat, cheese, potatoes – heavy items, weighing it down. Instead, a miracle had happened and the bag freed itself of its earthly burdens and opened itself to the sky.

The bag had stopped dancing so she ran outside. Quick, before it blows away. No time for shoes. It lay on the ground, smiling up at her, making Millie feel less like a stalker. Then a gust of wind filled it and the bag made a swing-like movement that turned into a waltz, then something more jig-y and rhythmic. A salsa? Maybe it wasn’t from these parts, but a place where flowers lusted in gardens, golden with sun, and sultry rhythms were played in courtyards as water dripped from fountains.

A grey day here. In a moment of stillness the bag pauses, holds out a hand. Take me. Millie crouches. A trick perhaps, nothing like this has happened for years. Soft plastic skin that moulds itself to hers. Passion at first touch. The wind picks up, twirling them round. What air, what steps, what rapture. It fills her up, makes her feel young and spirited and lithe. 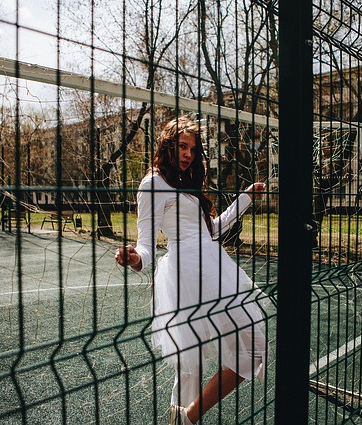 And that voice! The sureness of it. Yes, she would go with him to Land’s End, stand on a cliff edge without fear, launch herself from a plane with a parachute strapped to her heart. Wrap her arms around his chest as they roar off on his motorbike, the engine a lavish earful of sound drowning the silence of her little cul-de-sac.

She is love itself: her library book nurse bewitched by a swarthy young doctor, the nineteen-year-old orphan rescued by a surfer on a deserted beach. Not the ageing spinster no-one wants to meet. But then the bag is torn from Millie’s arms and rips into the air where it hangs, for a moment, before catching on a branch and turning upside down. All spills out: her hopes, her lungs, her dreams.

And she’s left standing on the street, glancing at upstairs windows where people shake their heads and laugh.

Helen Kampfner lives in the Basque Country, where she works as an English teacher. Her short fiction has been placed in various competitions and published in The Pacific Review, The Write Path, Dream Catcher, Gem, Eyelands and the HISSAC anthology. Her first novel, Chaos Theory, was shortlisted in the Opening Chapter Competition at the Writers Workshop Festival of Writing, 2014.