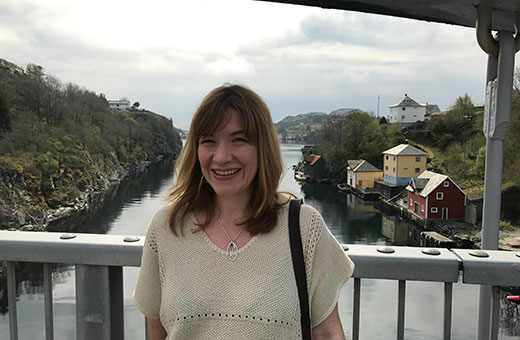 Hi Johanna – huge congratulations on winning the Cambridge Flash Fiction Prize 2020 with your piece ‘Yew’. What can you tell us about this story – how did it emerge and develop into the final draft?

First, thank you so much, to you Rupert, and the TSS team, and to Elisabeth Ingram Wallace, whose writing is some of the best I’ve ever read. I’m truly over the moon.

In terms of where this story came from, last night I was browsing my notes/writing ideas on my phone, and came across ‘Capability Brown hedge woman POV’. So I guess that’s where it started; I do know that I wanted to do something outside my comfort zone. I originally wrote the piece last April under the title ‘Topiary’, and it was a little shorter. In fact, I entered it into a few competitions during 2019 and it sank without trace. I think the key to making it better was making it longer. I believe there’s an ‘ideal’ word count for some stories; they either work better when cut and subjected to a level of restraint, or they benefit from a little more breathing space. For me, this is why editing a flash fiction piece can take longer than editing a short story – experimenting, finding the right consistency almost, takes so much time. The TSS competition, at 400 words, gives a little more leeway, which will suit certain stories.

Most of my ideas land without much input from me (on a conscious level), and only every few weeks. A sentient hedge was such an idea… Like most of my flash pieces, I didn’t plan it out beforehand, and it wasn’t until the end I realised the topiarist would be a woman. In my mind it’s a historical story, and I wasn’t even sure if there had ever been any female topiarists. (I did try to find out, but all that my internet searches produced was a story about a man who had a woman-shaped hedge in his front garden, which kept getting molested by drunk people on their way home from the pub.) I felt making the ‘you’ of the story female was a nugget of surprise that brought together the other aspects, the hedge-woman, the eggs, giving and taking, the hidden things we don’t see inside what’s cultivated.

Could you tell us a little more about your writing in general and perhaps your processes – do you write every day, have a special place you like to write, etc.?

I began writing in 2016 (actually, I did a bit around eighteen years ago but no one ever saw it), starting with short stories, and moving on to include flash fiction. I tend to write when I get an idea – or more accurately, when I sit on an idea until it grows, often cross-breeding with another idea. While I’ve used prompts in workshops (with Nancy Stohlman and Meg Pokrass), and these have been really productive, for ad hoc writing I always forget what a good tool a prompt can be. I need to make more use of these, I think.

I don’t write every day; sometimes I go two weeks or more without writing – although that’s less the case these days (now that I’m working on something longer). Even if I’m not writing, I’m thinking about writing and potential stories. I note down descriptions of things and people I see on my phone whenever I’m out for a walk.

In terms of commitments and time, I’m a freelance proofreader and I work irregular hours, so everything else has to fit around that. I work best if I have a good chunk of time (hours) to sit and let words and ideas brew, which means if I want to write or edit a new standalone piece I need a day or evening alone (or several), without distraction, which is not so easy to come by. I dream of quiet writing retreats! I like to keep work and writing space and tools separate, so my novella Homing (published by Ad Hoc Fiction) was written on a laptop on the bed over a period of months, a chapter here and a chapter there. Having said that, we’ve recently installed a simple but lovely ‘shed’ in the garden, and this means – also due to lockdown and dwindling work – that I am now writing a little most days, but this is limited to my current work in progress, a historical ‘novel in short chapters’. I’m sensing the seeds of new ideas too, which I’m trying to politely ignore in the hope they begin to grow!

Are there any Flash Fiction collections you’ve read recently that you’d recommend?

Ken Elkes’ All That is Between Us (Ad Hoc Fiction) is an excellent collection, and one to be taken slowly, I think, a story at a time. Last year’s Ellipsis winner, Mason Binkley, produced a lovely collection, and John Brantingham’s Inland Empire Afternoon (Ad Hoc Fiction) – who was joint runner up with me last year in the Bath Novella-in-Flash competition, has stayed with me ever since I read it. Some of his flashes are so short, but collectively they build into something quite intense, and the same can be said for Michael Loveday’s Three Men on the Edge. Meg Pokrass’s work is incomparable: Alligators at Night is a great place to start. I have a big pile of flash books next to my bed, as ongoing reading – in there are Christopher Allen’s Other Household Toxins and Tara Laskowski’s Bystanders.

Which authors have inspired you over the years?

I used to read constantly – as a kid and teen – and went on to study English Literature at university, first BA and then MA. But after that I read less and less – I was busy with new career(s), a hectic social life, and then kids. I’ve consciously picked up reading again in parallel with writing, so I’ll concentrate on the last couple of years in terms of the writers who have inspired me, not only to write better, but to show how the form can be manipulated. I love the prose of Cynan Jones – it’s as much a pleasure to listen to as read. I’ve only recently discovered Elizabeth Strout; she makes it look so easy, I’m envious. I regularly reread and re-listen to Alice Munro’s and Margaret Atwood’s short stories as well – they are masters. Over the last year or so, I’ve discovered an array of authors whose books have made me want to read their whole back catalogue: Anthony Doerr (All the Light We Cannot See), Ben Myers (The Gallows Pole), Bernard MacLaverty (Midwinter Break) have been highlights, along with Kamila Shamsie (Home Fire) and Bernardine Evaristo (Girl, Woman, Other). The one writer who has been on my shelves for the last 25 years is Carol Shields. I adore everything of hers.

How do you think we can respond as writers to the current situation – the pandemic, lockdown in the UK, social distance…?

From a personal perspective, I think it’s necessary to acknowledge these differences between our experiences and reactions. For me, trying to write from a place of confusion and uncertainty has proved an impossible task – at least in terms of diving into a new piece of writing – or even editing anything written before February this year. I think it’s fine, if the writing and ideas aren’t coming, to step back from the edge for a while, and not take that dive.

I think the difficulty many are finding is because writing is an act of reimagining, and this makes it tricky right now – how do we imagine or reimagine ‘what if’ in circumstances that are new to us all, and we don’t know what things will look like months from now? Every writer will have their own answer to this, even if it’s ‘I don’t know’, or simply, ‘I can’t bloody find a minute to myself to work out if I can write or not’.

Although I’m stuck in terms of new writing, the novel I’m working on is set in the 1850s, and I’m grateful for that – it offers an escape, at least while I’m at my desk.

From a communal and community perspective, and for those that can write, there are excellent projects being launched to help raise funds for key workers, the homeless and struggling charities. Then there are initiatives to connect people, like Hannah Storm’s Twitter #FlashFamily, SmokeLong’s online Zoom parties, and the festivals that are taking place online, such as the Stay at Home Festival. And I’m actually in awe of all those writers, readers, judges and organisers behind the scenes of the writing competitions across myriad genres; they are carrying on, in a steady, ‘business as normal’ sense, and what a joy and anchor that is for the writing community, especially as even further behind the scenes, at home and work, those people’s lives are upended too.

What’s the best writing advice you’ve ever been given?

‘You must keep writing.’ This was from Sarah Schofield, tutor of the Comma Press Short Story course, on the way to Liverpool Lime Street train station after our last session in 2016. I sometimes think how easy it would have been to let work and children and excuses take over, because regardless of the drive to write, there also needs to be a determination to carve out time and make certain sacrifices, and ask for sacrifices from others. I kept that one urgent sentence with me.

Further down the line, a lightbulb moment was when I first encountered the ‘what is at stake’ question. I use this in everything I write, short, or long(er). If I have no quick answer, the piece needs more work.

Johanna Robinson is an editor/proofreader from Liverpool, and has been writing since 2016. Her short fiction has been featured in a number of magazines, including SmokeLong, Ellipsis Zine, Reflex Press, Strix and Mslexia. Her novella Homing, set in Norway in WWII, was runner-up in the Bath Novella-in-Flash 2019 competition, and is published by Ad Hoc Fiction. She is currently working on a novel, and more of her work can be found on her website.

Read about the Cambridge Prizes.