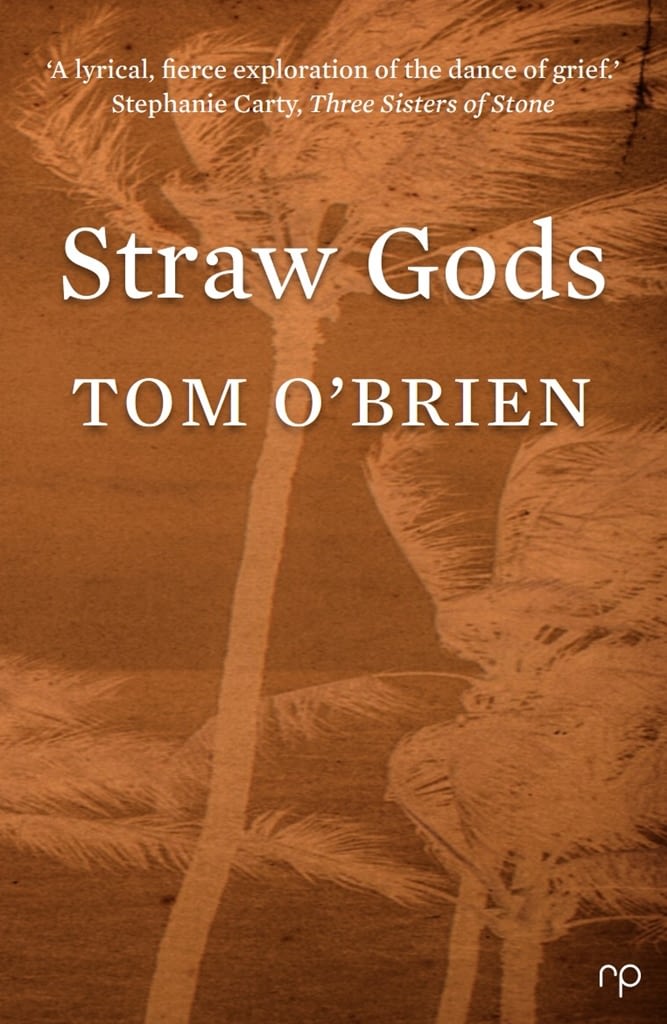 Straw Gods is the gripping, heart-breaking debut novella-in-flash from Tom O’Brien. Set in an unnamed fishing village on an unnamed island it introduces us to a young widow, Rosa, and an even younger fisherman, Sol. Their lives were both changed ten years earlier when Rosa’s husband was lost at sea. Rosa is unable to move on from her husband’s death, retreating into her rituals of summoning and remembrance. The bulk of the novella occurs over one day and night as a storm builds and breaks over the village, though there are a few flashbacks and one final story that could be considered an epilogue. The tension builds with the storm as disaster looms in various forms. Finally, secrets are revealed and both Rosa and Sol gain a new understanding of the past decade and those closest to them.

There are 39 flash fictions in the novella, 32 written in first person from Rosa’s point of view, the remaining seven in third person focused on the young fisherman Sol. Rosa’s stories range in length from a couple of short paragraphs to two and a half pages. Sol’s on the other hand are longer, the shortest just over a page long and the longest more than three pages long. Because we see his perspective so rarely, the longer stories work to immerse the reader in his world that bit deeper each time, so that he doesn’t feel like a bit-part in the narrative. He does of course crop up in some of Rosa’s stories too, as seen through her eyes.

It’s not clear when the novella is set: there’s a beer bottle used to pretend a microphone, and boxing commentary on the radio, but there’s also a wind-up record player and the fishing boats are powered by oars. The ‘when’ doesn’t seem to matter, and neither does the ‘where’. Rosa’s late husband Matteo, it is said, was ‘from somewhere else’. Does that mean from another part of the island or another part of the world? We’re not told. All the reader needs to know about is a sometimes warm, storm-hit beach in the here and now of this tale. The story is as self-contained as the island it is set on.

As with other novellas-in-flash that I’ve read, there are some individual pieces that I don’t think would stand alone, or at least wouldn’t pack as much of a punch. They work in situ because the reader has grown familiar with the characters and situation enough already to fill in the gaps and recognise significance. ‘Silent Notes’ is one of these: Rosa writes a mesmerising fairytale, but the bare introduction to this action – ‘As the music played, and dangerous feelings welled in my chest, I took a pen Matteo gave me and wrote’ – only makes sense because we know who Matteo is. I don’t see this as a weakness, after all they are not being presented as separate works but as part of a whole book with an over-arching story. Not every piece of a novella-in-flash need work on its own, as long as the overwhelming majority do.

On the other hand, ‘Several Uses for Music’ in three short paragraphs of simple prose conveys a melancholic beauty that doesn’t depend on the surrounding story at all. We don’t, in that flash, know Rosa’s name, or that Matteo is her late husband – he could be an ex-lover, still alive but departed. We don’t know how old she is, or what her relationship with her sister is like now, but the flash itself is still touching and poignant.

Some of the flashes are beautiful, painful and lingering, as though O’Brien has distilled grief into those few paragraphs. There are such recognisable moments and sentiments among the oddness of Rosa’s existence that anyone who has experienced grief will surely respond to them. ‘Another Word for Love’ in particular had the tears pricking behind my eyes. I thought he captured the all-consuming selfish introspection of grief so well, for example in ‘The Smuggler’, where Rosa says after she has done something morally dubious in the face of someone else’s suffering, ‘my pain so real it granted me exemption from humanity’.

In among the spare prose there is some gorgeous, haunting imagery, such as in ‘Scream into Thunder’ when the sea has ‘silent lightning skittering across its surface on thin violent legs’ and Rosa says, ‘I washed ginger and desolation from my teacups’. I liked how the start of the first flash was echoed in the ending of the final flash, giving a sense of completeness. I also enjoyed the folklore elements, I don’t know if they are based in real beliefs or if some are original to the story, but the idea of memories trapped in stones particularly struck me.

Though the novella nominally has 105 pages it would have been more like 75 if it wasn’t for each new flash beginning on a fresh right-hand page, so it was easy to read in one sitting. I say easy but I was torn: I wanted to slow down and savour the imagery, but I had to read on to find out what happened. It is the sort of short book that rewards re-reading.

JY Saville lives and writes in northern England, and made it onto the first stage of the Penguin Random House WriteNow scheme for writers from under-represented backgrounds in 2017. Her short fiction has been published in more than forty places including Untitled:Voices, Truffle magazine, and Confingo. She has reviewed books for The Bookbag, Disclaimer, SFReader, and had a review column at the Luna Station Quarterly blog for a while. She doesn’t read nearly as many books as she’d like to. She blogs at http://thousandmonkeys.wordpress.com/ and tweets @JYSaville
Type to search or hit ESC to close