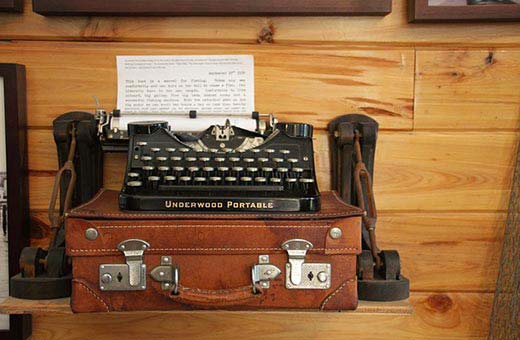 When the 22-year-old Ernest Hemingway relocated to Paris in 1921 some of the century’s greatest experimental writers were already there. At the forefront of literary modernism was Ezra Pound, imploring artists to ‘make it new’. Under Pound’s guidance the young writer experimented with new writing techniques. Above all else, what obsessed Hemingway was perfecting a new way of conveying emotion to the reader by indirect means.

On a daily basis, while putting together his debut short story collection, Hemingway visited the Musée de l’Orangerie in Paris to study Paul Cezanne’s paintings. What particularly fascinated him was Cezanne’s ability to elicit an emotional response. Hemingway sought to generate the same emotional response with literature.

One way to do this is through mimesis. Mimesis is derived from the Greek word “mimeisthai”, which means “to imitate” But it is more than merely copying what is observed, it is essentially a re-presentation of something real, not necessarily a re-creation of the image per se but the creation of the emotion that the image creates. And this greatly appealed to the young Hemingway who wanted to write prose that had a reader experience something, with particular reference to the emotional reaction, as if it happened to them. In order to achieve this, he employed a range of combined techniques in the short stories from his first published collection, In Our Time (1925).

One of those techniques, in those early days of experimentation, was parataxis. Derived from the Greek word “to place side by side”, parataxis is a writing style that employs short, simple, rapid-fire prose, without the use of linking words.

In 1924, following thousands of hours of rigorously perfecting his writing technique, Hemingway was working on a short story that he believed was as good as any he had yet written. The story is Big Two-Hearted River. It is also one of the earliest pieces to employ his ‘iceberg theory’, in which the underlying meaning is suggested, rather than openly stated. Big Two-Hearted River is almost exclusively descriptive and — like a lot of Hemingway’s early work — is intentionally plotless. It also employs parataxis to startling effect.

The story’s solitary character, Nick Adams, gets off a train somewhere in the Michigan backwoods, hikes cross-country and pitches a tent for a fishing trip. The activities of camping and fishing are explored in the minutest of detail, while the landscape is painted with broader strokes. Consider this short passage from the story:

“Nick was happy as he crawled inside the tent. He had not been unhappy all day. This was different though. Now things were done. There had been this to do. Now it was done. It had been a hard trip. He was very tired. That was done. He had made his camp. He was settled. Nothing could touch him. It was a good place to camp. He was there, in the good place. He was in his home where he had made it. Now he was hungry.”

Things are stated without explanation as they pass through Nick’s consciousness. Each sentence has little or no relationship to the other sentences contained within the paragraph. In addition, all of the sentences carry the same weight. The clipped sentences do not tell us directly what Nick is thinking with regards to his mood. The reader is obliged to make their own explanation. This is parataxis.

The staccato style suggests the rapid thought pattern of someone who is deeply unsettled. But Hemingway doesn’t give us a direct insight into Nick’s psyche. The reader has to make a leap of unconscious interpretation, thereby creating reader involvement. In this way, if the reader is involved in a text, then they have made an investment. If they have made an investment, then they care. And, if they care then it is much easier to elicit an emotional response from that reader. However, there is something else in this process of indirect interpretation. When a reader makes that unconscious leap, and the emotion rises, the reader is not entirely sure why they feel the way they do. This is incredibly powerful. Imagine having an emotional response to something without fully understanding why. It is an intense experience.

Hemingway wasn’t the first to use parataxis, but he did make it famous. Charles Dickens employs the technique — all within one long sentence — in his opening to A Tale of Two Cities:

Each clause within the sentence can stand alone, and each one is therefore equal to the others. The images come at the reader in a rush, compressing the experience and impression into something immediate that must be processed all at once. There is hustle and bustle here.

Richard Lanham devotes a chapter to parataxis in his classic book on linguistics, Analyzing Prose. He has this to say:

“Parataxis can be a contrived, patterned, self-conscious style, one whose syntax can carry . . .  an allegorical meaning of its own. It is easy to write a laundry list, but not so easy to write like Hemingway without falling into parody. Try it.”

Lanham is absolutely right. It appears so simple, yet it is an extremely difficult thing to pull off without sounding like you’re writing fiction for infants.         I was recently pointed in the direction of a superb contemporary short story which uses parataxis beautifully: Paul Crenshaw’s Ricochet. It is a coming of age story of an unnamed boy who witnesses the changes following his father’s return from the war in Afghanistan. The boy goes on a deer hunting trip with his father, shoots his first deer, and two other hunters try to claim the kill.

“The boy saw his father look down at the deer. There was a small red hole in its side and when it breathed a bubble of blood formed over the hole. The boy wished it would get up and run away. The two men stood behind the deer, spaced a few steps apart. It occurred to the boy that they were all carrying guns.”

The simple sentences and staccato rhythm mimic the tangled thoughts and emotions of the boy. Parataxis is naturally disorientating; it creates a distance between the boy and his father. Crenshaw cleverly enhances the effect by refusing to give the boy a name. Parataxis can also be compared to the way that children speak. They say things, one after the other, without logically connecting those ideas. The boy is 13 years old, so the style: short sentences that appear unconnected, suit the thinking of a young teenager. The sentences are not subordinated by words such as ‘although’, ‘because’, ‘so that’, etc. They are all on the same level. So, they are placed beside each other without any sense of which sentence is more important than the other. We insert our interpretation, our own thoughts. As a reader you get a feel for mood. The thinking is as bleak as the autumnal landscape. And it is foreboding.

Incidentally, there is another definition of parataxis with regards to literature, and Ezra Pound was its most famous exponent. It involves the placing together of two separate images or ideas. Each individual reader is then left to make their own connections. A perfect example is Pound’s poem In a station of the metro.

The apparition of these faces in the crowd:
Petals on a wet, black bough.

Pound had this clear image in his head — as people often do when recalling a memory — of standing in the metro in Paris and glimpsing beautiful faces in the crowd. And he wanted to add an emotion to it — a sentiment — in the way that we reminisce. In remembering that day when he stood on the platform, he provided an image (the faces), then paired it with a separate image of ‘petals on a wet, black bough’, that somehow create the desired emotion. It was a breakthrough in Modernist literature.

Certainly, Hemingway’s style and technique changed over his long career. He discarded techniques that he believed did not work. However, he refined those techniques that he believed played to his strengths. And his greatest strength was his lyrical prose. His  minimalist style; use of short words, words with few syllables, non-linear sentences, are all perfectly suited to the utilisation of parataxis. And this literary technique helped to produce the very thing that Hemingway is most famous for: eliciting an emotional response from a reader.

Peter Jordan is a short story writer from Belfast. He has won numerous bursaries and awards, including three Arts Council Grants. In 2018, he was nominated for Best Small Fictions and Best of Net. In 2017, he won the Bare Fiction prize, came second in the Fish and was shortlisted for the Bridport. Over 50 of his stories have appeared in literary magazines and journals, including Flash: The International Short Story Magazine, The Nottingham Review, The Pygmy Giant, Flash500, Thresholds, Litro, The Incubator, The Honest Ulsterman, Dogzplot, Spelk, Fictive Dream, FlashBack Fiction & WordFactory. He has taken time out from a PhD in Belfast’s Seamus Heaney Centre to complete the edits on his short story collection, Calls To Distant Places, which was published on 22nd August 2019. You will find him on twitter @pm_jordan.