Hemingway’s Use of Priming, by Peter Jordan 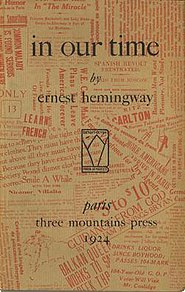 A number of years ago I began some academic research into Ernest Hemingway. I thought the best place to look for Hemingway’s experimental use of technique would be in his first short story collection In Our Time. The collection was written in the 1920s when he was tearing up the literary landscape with a new experimental style of writing. A feature of that writing is a simple surface story with something running underneath.

My particular interest is in what I believe to be a previously untried technique that he employed in the short story ‘Up in Michigan’. That technique is priming. Priming influences the behaviour of a reader without the reader being aware that their behaviour has been affected. In other words, priming subliminally targets the subconscious of a reader.

Anyone who has read Malcolm Gladwell’s Blink will be familiar with priming. In his book, Gladwell cites the work by Professor John A Bargh and his colleagues in the mid 90s. Bargh primed a group of undergraduates to think of old age by giving them the scrambled sentence test.  The test involves the presentation of a series of five scrambled words.  The idea is to devise a grammatical four-word sentence from the five words.  For example, one of the groupings might include the words blue, the, from, is, sky. So the sentence will read: the sky is blue.  Bargh used the following words in his test: forgetful, Florida, bingo, lonely, bald, wrinkle, gray, worried. Without letting the participants know what was going on, the experimenters timed their walks down the hall. After the students had completed the task they walked more slowly. They had been primed to think of old age.

I believe Hemingway employed a similar technique in an attempt to prime the reader. ‘Up in Michigan’ tells the story of Liz Coates, a young waitress smitten with Jim Gilmore, the town blacksmith. When Jim returns from an overnight hunting trip, he celebrates in the guest house in which she works, drinking with his hunting companions. He then fondles Liz in the kitchen and they go for a walk to the dock. At the dock he again fondles her, forces himself upon her, then passes out on top of her. She gets out from under him and tries to awaken him but covers him with her coat. Then she walks home crying and goes to bed.

Gertrude Stein described the story as ‘inaccrochable’, likening it to a painting that could never be displayed because of its sexual content. His parents demanded he pull it from publication. His publisher insisted he make wholesale changes. Hemingway disagreed. The story is controversial to this day – it is a date rape – yet Hemingway, not the most diplomatic of writers, handles it with a degree of subtlety. He adopts Liz’s point of view with his camera-eye objective description of concrete details that indirectly convey emotion. He also attempts to ramp up the emotional impact, I believe, by inserting priming words that have sexual significance. In the story – of less than 1950 words – Hemingway uses the words came, come, coming, hard, stiff. The following sentences contain the priming words in context.

When she looked at them they didn’t seem to be moving at all but if she went in and dried some more dishes and then came out again they would be out of sight beyond the point.

The night before they were to come back she didn’t sleep at all because it was all mixed up in a dream about not sleeping and really not sleeping.

When she saw the wagon coming down the she felt weak and sick sort of inside.

She couldn’t wait till she saw Jim and it seemed as though everything would be all right when he came.

All the men had beards and there were three deer in the back of the wagon, their thin legs sticking stiff over the edge of the wagon box.

It was stiff and hard to lift out of the wagon.

The men came in to supper feeling hilarious but acting very respectable.

She didn’t want to go to bed yet because she knew Jim would be coming out and she wanted to see him as he went out so she could take the way he looked up to bed with her.

She was thinking about him hard and then Jim came out.

Jim came over back of her chair and stood there and she could feel him breathing and then he put his arms around her.

Liz was terribly frightened, no one had ever touched her, but she thought, “He’s come to me finally. He’s really come.”

She held herself stiff because she was so frightened and did not know anything else to do and then Jim held her tight against the chair and kissed her.

Jim held her tight hard against the chair and she wanted it now and Jim whispered, “Come on for a walk.”

The boards were hard.

The hemlock planks of the dock were hard and splintery and cold and Jim was heavy on her and he had hurt her.

There was a mist coming up from the bay.

A cold mist was coming up through the woods from the bay.

When Hemingway began working on his new minimalist style, 1920s Paris was the artistic centre of the world, writers flocked there for its freedom, avant-garde philosophy and inexpensive lifestyle. Hemingway was forging a distinctive style of writing that set him apart from other modernist writers. It was his innovation to write sentences that were stripped to the bare bone. His style involves the use of short sentences and paragraphs containing simple, precise language. The use of what he described as ‘concrete’ words, the short word over its longer equivalent; ellipsis and suggestion, and a colloquial style in both dialogue and narrative.

Ellipsis and white space on the page encourage the reader to fill the void with their own subjective experience. When a reader does this, they have emotional investment in the story. It makes a reader care. The stripped bare language is the most effective way of delivering a message: if there is too much detail, or even too many words, the reader loses concentration and the power is lost.

While writing ‘Up in Michigan’, Hemingway was experimenting with technique; he wanted to have a reader experience more than was on the page. The In Our Time stories each display a different technique with the aim of having something else suggested, something implicit. The reader engages and fills the void with their own emotional experience given the objective concrete details and the suggestion that sits under the surface. Interestingly, Hemingway doesn’t employ these sexual priming words in the long descriptive passages within the narrative. And he is right not to do so. Their effect would be lost. The only time he uses these words is when he is talking about either Liz or Jim.

However, although I do believe that Hemingway attempted to prime the reader, I don’t believe it worked. The problem is that, for a prime to work, it must remain subliminal. The Nobel laureate, Daniel Kahneman, an expert on priming, has this to say: “an effective prime needs to be strong enough to impact behaviour, but not so strong that it enters conscious thought – the effect must remain subconscious.” The problem with Hemingway’s technique is that it enters conscious thought. The following lines are examples of where this happens:

She was thinking about him hard and then Jim came out.

Jim came over back of her chair and stood there and she could feel him breathing and then he put his arms around her.

Liz was terribly frightened, no one had ever touched her, but she thought, “He’s come to me finally. He’s really come.”

Hemingway just overcooks it and the effect is lost. This is also why I believe the story to be clunky – because those priming words cross the line from subliminal to supraliminal and the reader consciously interprets them.

I never got to finish that research. It may well be that Hemingway employed this priming technique in his later short stories or in his novels. He was certainly known for the meticulous precision with which he employed every single word on an individual sentence level. As I have previously stated, this early collection was experimental, and many of the techniques that he employed were later refined or discarded entirely. But I believe, in his later work, the key to his success was in choosing the right word, on every occasion, to evoke a visceral response.

Peter Jordan is a short story writer from Belfast. He has won numerous bursaries and awards, including three Arts Council Grants. In 2018, he was nominated for Best Small Fictions and Best of Net. In 2017, he won the Bare Fiction prize, came second in the Fish and was shortlisted for the Bridport. Over 50 of his stories have appeared in literary magazines and journals, including Flash: The International Short Story Magazine, The Nottingham Review, The Pygmy Giant, Flash500, Thresholds, Litro, The Incubator, The Honest Ulsterman, Dogzplot, Spelk, Fictive Dream, FlashBack Fiction & WordFactory. He has taken time out from a PhD in Belfast’s Seamus Heaney Centre to complete the edits on his short story collection,Calls To Distant Places, which will be published in May 2019. You will find him on twitter @pm_jordan.