Lessons in Launching a Literary Journal, by Dan Coxon

Dan Coxon, editor of The Shadow Booth, explains why he has decided to launch a new journal of weird and eerie short stories, and explores the challenges that editors and publishers face. The Shadow Booth features stories by Paul Tremblay, Malcolm Devlin, Gary Budden, Richard V. Hirst, David Hartley, Stephen Hargadon, Dan Carpenter and many more. It is currently crowdfunding on Kickstarter until 25 October.

I never meant to start a literary journal. That may sound strange coming from someone who has just spent the last few months doing very little else, but it’s the truth. I’ve worked on magazines before, and compiled an anthology. It was tough, even when it was good, and I knew that running my own publication would be even tougher. On top of all the concerns about quality, consistency, publicity and deadlines, there would be the extra worry of the magazine’s finances, the long-term planning, the strategy. It sounded more like auditioning for The Apprentice than working in literature. I wasn’t interested.

And yet here I am.

The Shadow Booth came about because I realised one day that if I didn’t launch this journal, nobody else would. Yes, there would be other magazines, other journals, other anthologies. I’m not suggesting that literature as we know it would have come to an end. But this journal – this idea I had in my head, this vague concept of something that might, one day, be brilliant – would never exist unless I did it. And it really, really deserved to.

Once that decision was made, The Shadow Booth took on a life of its own.

Early in the process, I had to decide how The Shadow Booth would be funded. Was this something I could afford to bankroll myself? Was there an Arts Council grant I could apply for? Or was crowdfunding the answer?

I’d already enjoyed some success taking the crowdfunding route, when I funded the Being Dad anthology in 2016. In my experience, there were plenty of benefits. Not only did it mean that you were in control of how successful the funding was, rather than relying on a faceless bureaucrat, it also offered the opportunity to connect with an audience at an early stage. I knew that I liked the concept I had, but would anyone else? Rather than throwing money at it and seeing what happened next, Kickstarter would act as a barometer of public interest. If it didn’t make its target – well, it wasn’t meant to be. But hopefully the audience I wanted was out there, and they would vote with their pennies.

What is a Shadow Booth Anyway?

As with any creative project, it quickly became apparent that I needed a clear, communicable idea of what it stood for, what it was. Not only did I have to attract a readership, in the form of Kickstarter backers, but I needed some writers. I had a germ of an idea in my head, a vague, nebulous concept that hadn’t quite made it into a concrete form yet. I needed to give it shape.

Much of the inspiration for The Shadow Booth came from going to live literature nights, and hearing writers reading their work. I was hearing so many wonderful stories, but many of them were unpublished, and it was uncertain whether they would ever find a home. In particular, many of the stories I enjoyed were slightly weird, definitely unsettling, but literary enough to be somehow different from much of the horror genre. They were eerie ghost stories that weren’t quite ghost stories, strange tales of fear and ruin that didn’t quite belong in Granta, but were too experimental to enjoy success in the regular horror markets. They were something other.

Eventually, I decided that the best way to convey this was through influences. My own ideas were often too transient to describe – I didn’t want to put boundaries on what would be considered, but at the same time I’d know it when I saw it. When it came to approaching people about the project, it seemed best to talk about other authors, to paint a picture of the field in which it would be pitched. I liked Jeff Vandermeer, and China Mieville, and Andrew Michael Hurley’s The Loney. Before that, I enjoyed Robert Aickman, and Ramsey Campbell, and Shirley Jackson. Reaching back further still, the shadows of Arthur Machen and H.P. Lovecraft loomed large. The Shadow Booth drew from all of these, and yet it would be something else entirely. Something new.

Let There Be Stories 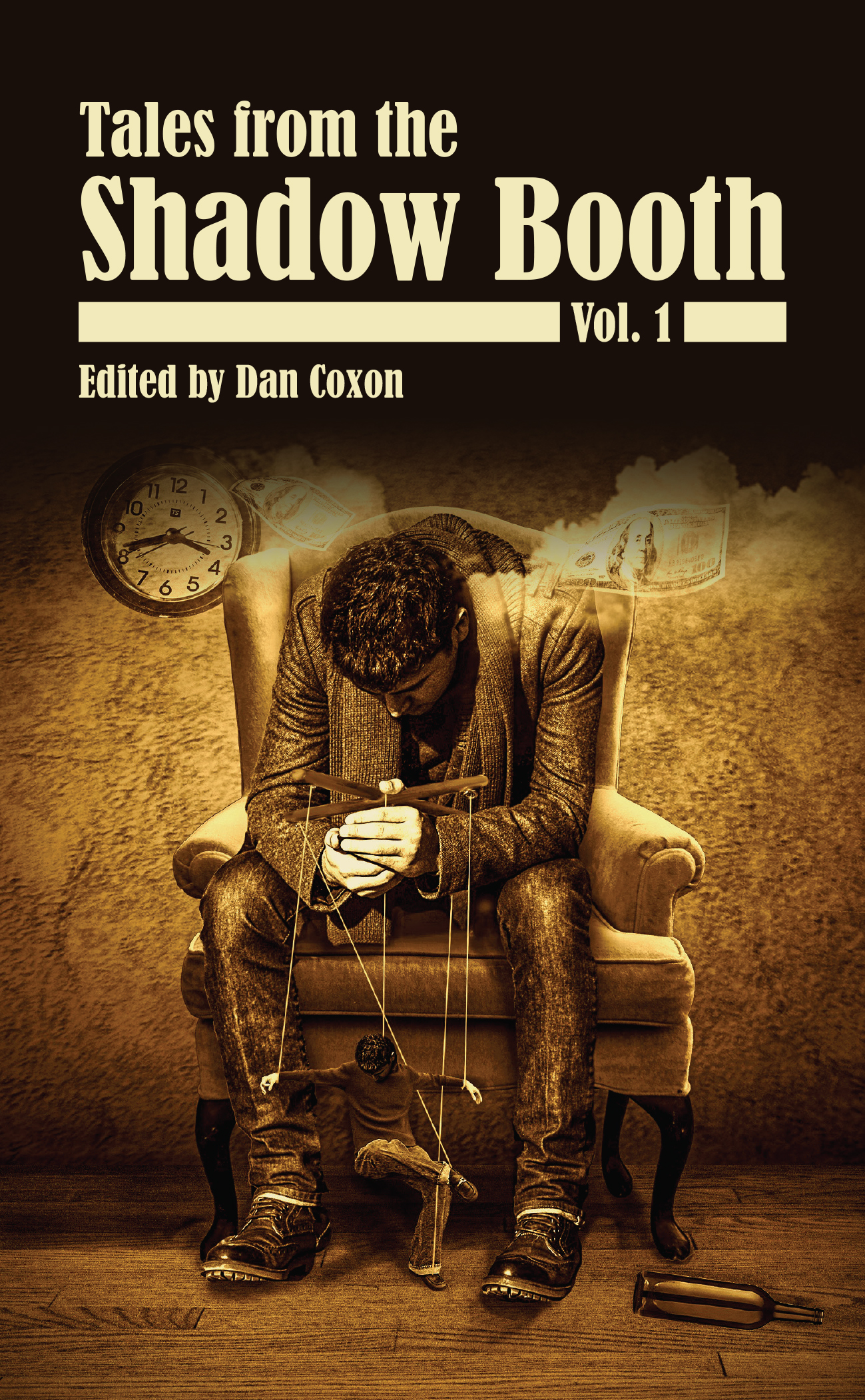 Having set these parameters, the writers I wanted to approach came easily. Yes, I sent a message to Jeff Vandermeer (there was no reply… yet). But I was also excited to find that Paul Tremblay was showing an interest, and Malcolm Devlin – two writers whose work I admired. They sent stories, and immediately it became clear that these were exactly what The Shadow Booth was about. They were dark, and unsettling, and very, very well written. I loved them.

Then, of course, there were the stories I’d heard at live events. I approached a couple of authors, and found the stories were still available. I already knew I liked them – they’d been part of the original germ, after all – so the decision was easy. What was more difficult was deciding whether there would be an open submissions period or not. In the end, I decided not. For this first volume, it was important that the tone was set, that the character of The Shadow Booth was apparent. The chances of getting that from random submissions seemed slim. That could wait until Volume 2. Instead, I approached writers I knew whose work would fit the tone, and persuaded them that they really ought to send me something. Most of them did. All of the stories were excellent.

The worst part of crowdfunding isn’t setting it up. That part’s easy – actually, that part’s fun. I knew that I wanted the Kickstarter campaign primarily as a portal for people to pre-order the book. I didn’t want handouts, or charity. I just wanted readers to show an interest and order a copy. The extra rewards were intentionally kept simple: T-shirts, postcards, signed books. Each should offer value for money, and something people couldn’t get elsewhere. This was our shopfront.

We haven’t reached it yet, but I know from experience that the end isn’t that tough either. Sure, if you’re falling behind your target it’s probably upsetting to see it all slipping away. But at least you usually know where you stand. And most campaigns I’ve seen have enjoyed a strong finish.

No, the tough part is the middle. It’s where the doubt creeps in. Those days when you tweet, and blog, and tweet again, and post to Facebook, and do an interview, and tweet again, but nothing happens. I’ve even wondered at times if my laptop has somehow become disconnected from the internet and I’m just shouting into the void. There will be days when nobody backs your project. Not a single person. And then the self-doubt starts to creep from the shadows at the back of the room, whispering in your ear, picking at your confidence. Am I deluding myself? Does anyone really want this? Have I simply set myself up for a (very public) failure?

When this happens, I look at the stories again. It helps to lay them all out in a single document, I find. The first volume of The Shadow Booth is close to 60,000 words, and we’ll be publishing it as a 200-page paperback. It’s an impressive thing. The stories hang well together, from the Kafkaesque to the tales of strange tentacled beasts. The writing is excellent too, and the contents page is a dream come true. This is something worthwhile here, something new. This is something that people will want.

Publishing a journal is like writing a book in many ways. There will be the moments of doubt, the stumbling blocks, the days when it all seems hopeless. There will also be the highs: the times that you feel proud of what you’ve achieved, what you’re bringing into the world. And above all else, it’s hard. Often very hard. But ultimately, at the end of the process, you will hold a book – or a magazine, or a journal – in your hand, and you will know that the only reason it exists is because you made it so. And however it turns out, that’s a wonderful thing.

Dan Coxon is the editor of The Shadow Booth, a journal of weird fiction, and Being Dad, an award-winning anthology of short stories about fatherhood (Best Anthology – Saboteur Awards 2016). He is a Contributing Editor at The Lonely Crowd and runs his own editorial services company, Momus Editorial. He was long-listed for the Bath Flash Fiction Award 2017.

The Shadow Booth is crowdfunding now on Kickstarter, until 25 October  You can also find it at www.theshadowbooth.com