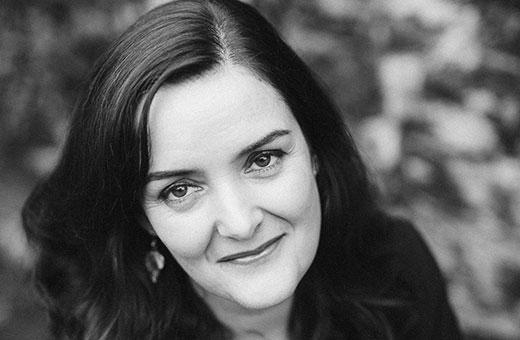 What was the spark that started Splonk?

I decided to set up Splonk while at the Flash Fiction Festival in the UK in July 2018. It struck me that Ireland didn’t have a magazine dedicated entirely to flash and there seemed to be a particular gap for an e-zine open to flash in the Irish language. As a devotee of the form I decided it was up to me to set it up.

I contacted potential collaborators (and flash writers whose work I love) Marie Gethins, Adam Trodd and Robert Barrett. I met Lisa Nic an Bhreithimh later at a flash workshop I facilitated and leapt on her the moment I heard she wrote flash in Irish. American writer and mixed media artist Janice Leagra joined as Visual Editor soon after we set up. So now we have this dynamic editorial team and Issue 1 has been a great success, which we’re really pleased about.

And the very catchy name?

That came to me when the idea formed to set it up. ‘Splonk’ is the anglicised form of the Irish word ‘splanc’, which means ‘flash’ or ‘spark’. Interestingly, a ‘splaincín’, or ‘little splonk’ is a spirited or fiery woman – I love that!

How do you select work? What are you looking for?

We’re the only dedicated Irish flash e-zine and the only one offering opportunities to those who write in our first official language, Irish. We’re very democratic. The work comes in anonymously and I distribute it to my co-editors and we all read blind (even I don’t know who wrote what until the end). For selections, we operate a 1 to 10 grading system, so it’s very equitable.

We, as editors, have varying tastes so we’re open to all kinds of flash fiction, we’re also open to international submissions. And, we’re not restricting genre – we’re happy to consider experimental work, straight narratives, language-driven flash, weird, historical, futuristic, quirky, ‘normal’, melancholic, and happy work. We want writers to send in the flashes and micros they’re most proud of and we’re not offering any restrictions as to theme, content etc.

Any flash fiction resources that you’d point writers to?

Smokelong Quarterly’s series of flash interviews are excellent, like a masterclass.

Twitter is the liveliest place to follow fresh flash. Stick in the hashtag #flashfiction and you’ll be directed to endless fab flash ezines and writers.

Read our resource page on the very best creative writing guides on the net.

What (if anything) distinguishes Irish flash fiction?

I’m not sure there’s much different other than the way we use English – Hiberno-English has its own particular flavour, heavily influenced by the syntax of the Irish language. I love colloquial language – if I read a New Zealand story, for example, I want to hear the NZ in it. Ditto every other setting.

Other Irish literary magazines, such as Crannóg, The Stinging Fly, Banshee and The Moth also publish flash fiction. Though there’s still a resistance from publishers regarding flash collections, and a resistance to including flash in short story collections. That bothers me.

In Ireland we also have the FISH prize for flash and the Dromineer Literary Festival has a flash section, and there have been a few one-off flash comps. Most competitions are set up by writers and its writers who push the flash agenda, ultimately.

We’re seeing the importance of language recognition around the world, and across the island of Ireland right now. There’s a joke about the number of words it can take to say something from English as Gaeilge (in Irish); thanks is four words alone! If flash is all about the art of compression and omission, are there any particular challenges writing as Gaeilge? Does writing as Gaeilge lend itself to flash in any way?

Will you be publishing English translations alongside?

I don’t write in Irish myself, apart from some poems years ago. It is a more wordy language but also very beautiful and writers can have a lot of fun with that. There are words and phrases in Irish with no English equivalents, so that can present challenges. I did an MA in translation studies so I’m really interested in that whole process.

We don’t see the need to publish translations at the moment, but it’s certainly something we can have a conversation about. It’s early days for us and things are being discussed and developed as we go.

One of the things I admire about you as a writer is the way you consistently defy pigeonholes and successfully work across genres. Where did your journey with flash fiction start and how did it develop?

I’m a fan of small things and flash fiction feeds that passion perfectly. Very short stories have been of interest to me since reading Aesop and bible stories, and since coming across Poe and Chekhov. I’ve always loved fragments and short forms, I devoured Ivor Cutler as a teenager and Emily Dickinson.

What makes you a devotee of this form?

I like working on a small scale. Even my novel chapters are short. I’m attracted to ‘sharp economy’ as Francine Prose said. I want that from myself and from other flash writers. It’s not something I have to chase hard for personally: brevity is my thing; I’m a concise, neat person. I like small objects, as I said: miniature glass whales, tiny ships in bottles, those 2cm plastic babies you find in American toy shops. I love small artworks that are wider than they seem: Emily Dickinson’s poems, Hemingway and Baricco’s novellas.

Any other books or writers that got you going in flash?

Read our interviews with Tania Hershman and Meg Pokrass.

Your love of James Joyce is well documented – how does that play into your work?

I think as an Irish writer Joyce is just there, this looming figurehead. If I learnt anything from him it’s that play in writing is important and also the language of the people. Lots of Joyce’s characters speak the same way my family speaks (I grew up in west Dublin) so I recognised from him (and others) that real speech is good and acceptable in literary work.

Can you share your favourite flash with us (that you’ve written)?

I’ve a fondness for ‘Yellow’, which is suddenly topical though it was written long before the transgender debate.

You’ve said that fiction is about trouble. As a teacher and editor of flash fiction, what are your three best pointers for flash writers?

What can we look forward to in the future from Splonk?

We’re still developing ideas about things we want to do so I can’t go into specifics just yet, but keep an eye on our website and Twitter.

Issue One of Splonk launched in May 2019, including flash fiction in English and as Gaeilge and featuring an interview with acclaimed flash fiction virtuoso, Kathy Fish. You can follow Splonk on Twitter @Splonk1 and writers can check out the submissions page at www.splonk.ie for detailed information about how to send in their fiction, in English or Irish. Splonk submissions open again in October 2019 and international subs are welcome.

Read our interview with Kathy Fish.

Nuala O’Connor  lives in Co. Galway, Ireland and she is editor at new flash e-zine Splonk. In 2019 she won the James Joyce Quarterly competition to write the missing story from Dubliners, ‘Ulysses’. Her fourth novel, Becoming Belle, was published to critical acclaim in 2018 in the US and Ireland and will be published in the UK in June 2019. She is currently writing a bio-fictional novel about Nora Barnacle, wife and muse to James Joyce. Nuala has won many flash and short fiction awards including the Dublin Review of Books Flash Fiction Prize, the Gladstone Library Flash Prize, RTÉ radio’s Francis MacManus Award, the Cúirt New Writing Prize, the inaugural Jonathan Swift Award and the Cecil Day Lewis Award.