Invention isn’t always in fashion. Readers of short fiction, in particular, often favour craft – the literary nanotechnology of world-building in miniature, the asceticism of the stiff edit, the art of omission – over creative flair.

Stories like George Saunders’ ‘The Semplica Girl Diaries’ or Simon Rich’s wildly comic ‘Sell Out’ serve as reminders that short fiction is about invention as well as construction. Yelena Moskovich’s plushly elegant ‘Marlene or Number 16’ won the 2017 Galley Beggar Prize by making stylish play with structure and syntax (though I’m not sure I can ever forgive it for finishing on an ellipsis). 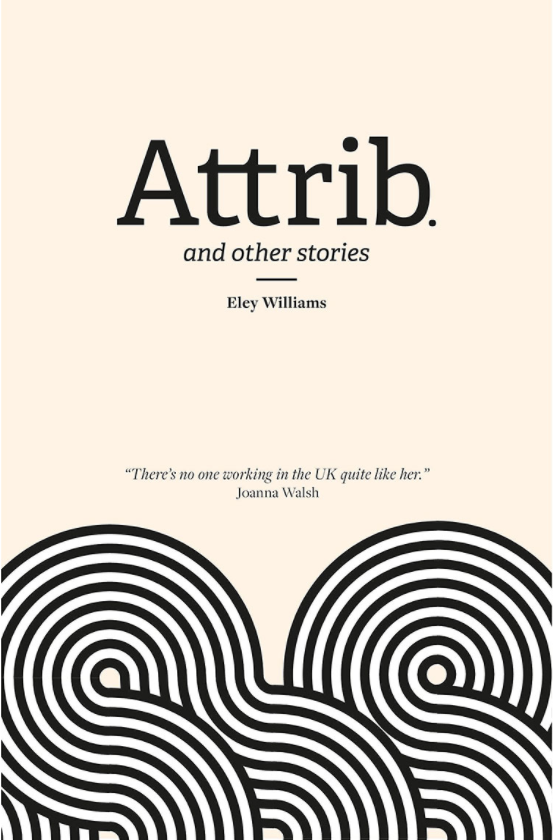 A collection like Eley Williams Attrib. (Influx, 2017) pushes all this sort of thing a good way along. Attrib. is not experimental. It’s not a test-run or a tryout. Rather, it’s a showcase, a dazzling talent show of language and literary expression; it’s very much a finished product. If there were any doubt that Williams knows exactly what she’s doing – down to the half-inch, down to the barest femtometre – then she simply wouldn’t be able to get away with it. She does, she is. Williams is a phenomenon, and Attrib. is a phenomenal piece of work.

If short stories are always about the unsaid, about what is left out as much as what is left in, then I feel cheated. I want to read whatever Williams left out. Happily, however, I don’t think that’s true: sometimes, as here, short stories feel stuffed full, brimming with words, creaking at the seams with ideas.

In ‘Alight At The Next’, the narrator stalls a barging-on Tube passenger with a finger on his forehead; in ‘Spines’, a hedgehog bobs in a family’s swimming pool. Are these great ideas for stories? The fact is, there are no great ideas for stories, there are only great stories. Attrib. isn’t an anthology of elevator pitches. Every story here is like a little life: not easily summed up, not obedient to frameworks, but, on the inside, rich, busy, thriving.

Williams puts herself in places where language and reality intersect in interesting ways – ‘The Alphabet’ is narrated by a sufferer of aphasia, ‘Attrib.’ by a Foley artist, ‘Synaesthete, Would Like To Meet’ by a woman experiencing synaesthesia (“The part of one’s brain concerned with processing sensory information should be like a highly efficient switchboard. Mine is set up as if someone swapped the wires around, took a mallet to the bodywork and went to town with a soldering iron and a big jug of water”) – but she doesn’t need springboards like these to get airborne. The momentum of her imagination is enough. Often, her narration is a voice running ahead of reality – not quite a stream of consciousness, not quite so abstract, but a sort of hyperarticulate thinking-out-loud, a foraging, turning over words and phrases, shucking them for meaning and double-meaning.

The stories here crackle like chain reactions, jerked along by unlikely allusions and inspirations, showing not much in the way of discipline of form but kept in laser focus by Williams’ savantishly prodigious linguistic ability: “I make a boiled sound,” one narrator says; a morning moon “pulled the sea an inch inwards as if for a waltz”; a chef’s cooked ortolans are “just claws and fluff and hard mouthparts on a plate” (‘mouthparts’ makes this).

One of the stories in Attrib. – ‘Mischief’, which begins: “He is a rat trained to detect landmines. He has an excellent sense of slapstick” – put me in mind of another short fiction writer whose stories seem to shudder with creative compulsion. If Eley Williams sometimes trades in the outputs of nonstandard neurologies, the defining tone of Owen Booth’s work is a sort of neurasthenia. Booth’s writing – some of which is collected at The Flight Of Pigeons From The Palace – is an exercise in deadpan, but there is nothing lumpen or inward-looking about his stories. Like Williams, he has a tinker’s ability to bend and twist improbable components into the shapes of stories; the battleship-grey tone of his writing is offset by a furious magpie greed for things: submarines and ballerinas, predator drones and old movies, architects and volcanoes. Where Williams’ runaway trains of thought generally begin close to home – train stations, offices, bedrooms – Booth tends to begin with the far-off and take it from there. He writes, like a magical realist, of remarkable things as though they were unremarkable, but without any self-satisfaction – rather, with a sort of resignation. Emotional distance is a hard thing to judge, but Booth has a fine eye for it – disinterest never tips over into disdain, self-awareness never develops into mannerism. In stories like ‘Extracts from A Manifesto for The Container Shipping Industry’, ‘The Love Song Of The Predator Drone’ and the White Review Prize-winning ‘I Told You I’d Buy You Anything You Wanted So You Asked for a Submarine’, Booth’s talents for invention and bone-dry wit play across the surface of a bone-deep sadness.

These sketches, mordant fourth-person apologies for a disappointed generation, are both bleakly funny and steeped in guilt and heartbreak (“We take our sons to meet the heartbroken men. We have to show our credentials at  the gate. We have a letter of introduction.”). Booth’s voice is note-perfect: again that flickering Buster Keaton deadpan, that pleading sense of pathos amid dropped plates and collapsing buildings.

Booth, like Williams, is an inventor more than a constructor. But with both writers, what looks like indiscipline is deceptive. They might sometimes seem to proceed without blueprints, but what they build – odd-shaped, off-kilter, magnificent, defying gravity – somehow stands up all by itself.

Richard Smyth’s short fiction has been published by The Stinging Fly, Structo, The Fiction Desk, Riptide, Firewords Quarterly, The Stockholm Review, Minor Literatures, Litro, Foxhole and Haverthorn. He writes on books, nature and culture for the TLS, the New Statesman, The Guardian, New Humanist and many others. He’s also the author of a novel, Wild Ink (2014), and four books of popular history.