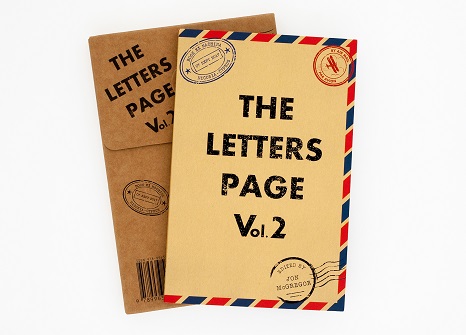 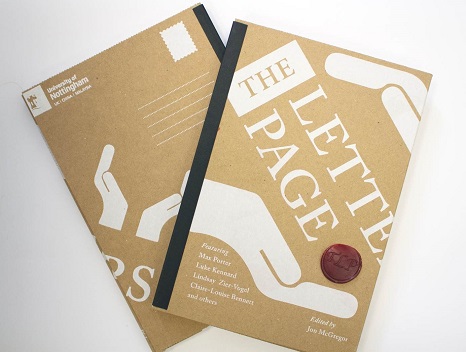 A few weeks ago, I received a wonderful looking collection of letters through the post, complete with innovative packaging, wax seal, and a personalised note. There are few things more pleasurable than sitting down with a cup of tea and something to read, especially when the fourteen pieces in hand, edited by Jon McGregor, are absolutely delightful.

Printed on high quality paper and interspersed with red, inky images and envelopes revealing the authors’ handwriting, it’s an object of beauty; a lovingly produced bundle of bound missives that had me hurriedly purchasing the other two volumes, irresistibly drawn by the intimacy offered by the form and a nostalgia for that slower time full of candlelight penmanship – not to mention the quality of the writers and their ponderings.

The letters themselves range in substance and style. Addressed variously to the Reader, a Jumping Spider, a father, TLP, or even self-addressed, we hop from fiction to memoir, help, self-help, from the trivial to the deep-and-meaningful.

McGregor opens the volume with a letter he’d written on a train, revealing a commonality with many other scribblers who find the relative quiet, patchy wifi, and lack of distraction, beneficial to the putting down of sentences. His mix of humour, semi-serious meanderings, combined with the jocular notes, effectively introduces the overall tone of the volume, as well as the host of writers within the cardboard-like cover – Max Porter, Luke Kennard, Clair-Louise Bennett among other correspondents largely from the U.S. and the U.K.

One of the most affecting letters was by Emily Lu, a psychiatry doctor, who writes a reflective letter to herself. It begins with a wry shake of the head – ‘Instead of a nice Chinese boy of your mother’s dreams you fell for psychiatry during your medical training. How could you.’ – but quickly dips into a heavier, more critical, more revealing tone – ‘During interviews when they asked for failure you didn’t tell them about the newborn who developed kernicterus.’ However, the weight of detail is offset by its brevity as well as the comparatively up-beat thread that advises her younger self to ‘be kind and mindful of yourself and those working alongside you.’  In this short letter, one has the sense of the writer-doctor offering an honest appraisal that shines a light on her reality (‘Suicide is an occupation hazard for you’), allowing her to find the way forward through the darker uncertainties of the future.

A similar, touchingly frank letter is sent to us from Pat Tompkins. In this one-way correspondence, Tompkins writes to her Dad and reveals a curiosity about his life that can no longer be satiated, ‘now it’s too late for answers’. How many of us would like to sit down with the dead, with those we have loved – continue to love – and ask them the thousand questions which rise over time? Tomkins puzzles over letters sent by her father while he was in the Air Force during World War Two. She wonders about the truth of the experiences conveyed in his jottings, penned in a time when missives like these were examined, censored. It’s a reminder that the written word is not always honest and that we should ask questions from those who have lived long before we were born, in a different time and world, while memory and life remain. Although just a few paragraphs, there are so many more things to unpack in this letter. It’s a gift to read.

In the letter titled ‘Bluish and Tall’, Lindsay Zier-Vogel addresses the mysteriously deceased Amelia Mary Earhart whose biography boasts and impressive array of skills and accomplishments. Confined to a single page, Zier-Vogel exposes a wistful, at times aching curiosity to know more about an extraordinary woman who is, clearly, one of the author’s heroes. Like Tomkins, Zier-Vogel’s piece explores the haunting half-realities left behind when someone has died – in this case through the suggestive images captured on VHS. Objects, be they film or letters, or something else entirely, exude an aura intensified by their connections with the living and the dead, made possible by thier relative permanence, their ability to cross the temporal boundaries of past, present, and future.

Max Porter, meanwhile, writes about the late John Berger, conveying his thoughts about the author who influenced him ‘more than any other.’ Porter explores the idea of the written gestures and in particular the ‘fraternal hug’ which he argues we need more of ‘in these disappointing times for the English Soul.’ I liked this letter because the central message was about connecting, about reaching out, of being kind and gracious to the people around us, those we know and those we do not. It felt like a celebration of humility and of the simple act of open-hearted, generous communication.

Among these personal reflections, we have the more whimsical, the funny, the political. Luke Kennard’s two-page piece manages to synthesise meta-fiction with amusingly pointed anecdote that takes aim at the world of insurance and banking, among other things. It’s a delectable mix that includes, to give you a little taste, the self-referential statement that ‘Luke Kennard, for better or worse, is based on authenticity, feeling ill-at-ease, repetition, anxiety and a kind of extended epistemological sarcasm.’ Quite. Comparable in tone and style is Mark O’Connell’s letter which begins with the formulaic ‘To whom it may concern’ before rapidly catapulting into the eccentricities of wasp-larvae use (Google at your peril).

Equally rambunctious was Keren Pickard’s orange-peeling revelation. In short: slice along the top, ‘NOT the navel side.’ Gotcha! Very brief, but luxuriating in the magic of the mundane, this letter sits well-placed between the much longer pieces by Chris Arthur and John Saul. The former of the two delves into the art of choose appropriate postcards and those received by the author – occasionally proffering a little too much detail, but also alighting on noteworthy observations, including the beautifully rendered idea that ‘trying to hold on to time may be like collecting water in a net, but it’s astonishing how handwritten marks on paper can sometimes close the mesh.’ Leapfrogging along to John Saul’s work of fiction, we’re presented with a jaunty, if mildly deranged, stream-of-conscious splurge from ‘Wilson’, sent to a sweetheart who is likely to have a different version of events. And what are these events? Suffice to say they involve an officer, decking, a van, measurements, TV land, a cello, a microwave, hoovering, and paint. Not necessarily in that order. It’s an immensely entertaining read and impossible not to whizz through to the end.

Also a work of fiction, slightly manic, and probably one of the hardest pieces to access was Claire-Loise Bennett’s. It required a couple of readings which was, frankly, a pure pleasure brought about by the pure sensuousness of the language. Take, for example, these luxurious lines in which the narrator indulges in a day-dream of a post-love-making morning walk: ‘a whole night of craving and cavorting with this vivid viscid pungent absence, all over me, all over me, all over me. Oh the stench of the whorl of the pattern of the disarray of my beautiful misspent desire.’ The whole letter drips with this viscous, self-involved obsession that’s both a little frightening and strangely intoxicating.

Rolf Venner writes about an ‘old flame’ (Elaine) and her funeral which is spectacularly odd and include a ‘hooded coat stitched from hundreds of rooks’ wings’, a clifftop ceremony, a blizzard, selfies, and a pub trip to the Blakean inspired pub, The Clod and Pebble. Unlike some of the other letters, there seems no direct purpose to this narration, other than to share an experience and to get something of the author’s chest – revealed, most poignantly, in the conclusion that Elaine was indeed gone ‘and a whole world with her’ and that ‘as with every death, a complete species was wiped out.’ There’s something Auden-like in the hyperbole of these statements and I would have liked to have got closer to the heart of the matter, to the writer, but perhaps the padding of the funeral description and surrounding action reveal the true concentration of pain and loss reflected in those brief sentences I’ve quoted. 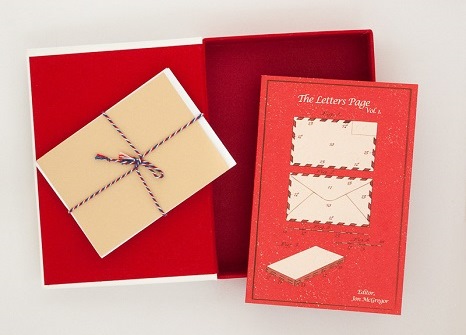 The only letter that isn’t addressed to a person or persons is by Kaci Laws – a joyful, playful, conversational farewell to a spider who has made home in a Cozy Coupe and survived shakings, drenchings, and grabbings. Impressed by the ‘versatility and spunky disposition’ of her eight-legged lodger, Laws alerts Jumping Spider that soon they will be departing to a new home in Maine. The affinity the narrator seems to feels with her web-making friend, the ‘fuzzy little guy’ offers space for her to assert ‘I think I’m ready to live for me, kind of like you are living for you.’ It’s a touching, hopeful, tentative assertion of independence.

The final letter in the volume is, fittingly, about departures. Yes, Brexit is mentioned and it’s impossible not to delight in the matter-of-fact take on the filer á l’anglaise that takes a certain William to task before ending with apt abruptness.

As a whole, The Letters Page offers something special and lasting. In fact, you could say it captures the reality of letters perfectly – pensive, sombre, whimsical, jovial, trivial, informative, long and short. It’s a reminder that this form, as a literary art, offers a wonderful opportunity to explore a range of ideas and experiences in an extraordinarily wide-ranging, fresh manner.

I’m already looking forward to reading the next set, due to be released in October 2019.

Rupert Dastur is a writer, editor, and founding director of TSS Publishing. He studied English at Emmanuel College, Cambridge, where he specialised in Modernism and the Short Story. He is Associate Editor at The Word Factory, a leading short story organisation based in London, and he has supported several short story projects and anthologies. Rupert’s own work has appeared in a number of places online and in print and he is currently working on his first novel.