Shorter fiction which has caught our reviewer’s eye. 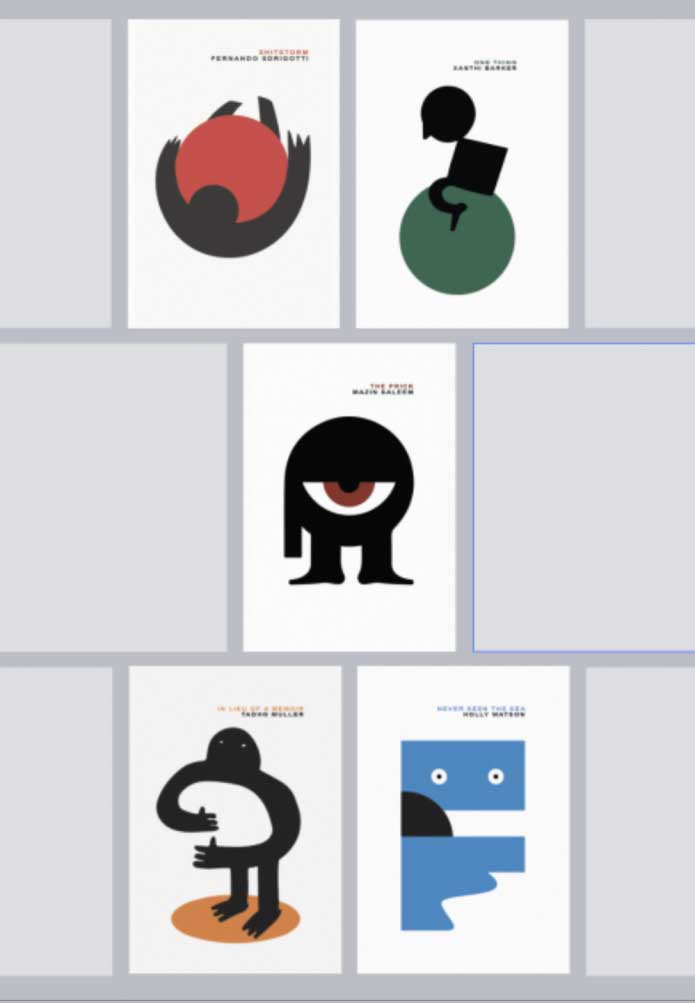 If there’s one thing the modern reader is short on, it’s time. So why not save yourself some by reading this round-up of recommended recent novellas and novelettes?

Quirky, risk-taking literary journal Open Pen recently branched out into publishing pocket-sized editions of longer stories (up to 17,000 words) by favourite authors who have featured in the magazine. They are small, elegant (with striking minimalist covers by Pierre Buttin), tightly edited and exceptionally well chosen, showcasing a wide range of subjects and styles ‒ not to mention bucketloads of talent. I greatly enjoyed all five, which, with such different authors and styles, speaks volumes for the taste of novelette (and magazine) editor Sean Preston. The series began in 2018 with Shitstorm and the final volume of the first series (the second is just coming out now) is Holly Watson’s just-published Never Seen the Sea.

Amateur big-game hunter Walter Turner, a dentist from Minneapolis, is invisible and anonymous ‒ at least to the vast majority of the internet ‒ until his selfie posed with a dead lion leaks, and a mighty shitstorm erupts. Tweets are tweeted, op-eds are written, death threats are made and even POTUS comments on the story ‒ and Walter’s life is shaken up like a snowglobe. But Shitstorm isn’t about Walter: it’s about us, and them, and social media and public outrage and trolls and hot takes and echo chambers and virtue-signalling and online petitions and and and (as Sdrigotti himself would put it). In our clickbait age of empty fame and publish shame, Shitstorm is pungently relevant: “Words become background noise to these terrible events, that in due time we’ll forget as well.” At times, Shitstorm feels more like scrolling a torrent of fictional but strangely-familiar rolling news on Twitter or Facebook than reading a traditional narrative ‒ and that has its own peculiar pleasures. However, it’s the final, brutal, poetically apt twist that signals the author had the story tightly under control all along.

One Thing by Xanthi Barker

Xanthi Barker has been one to watch for a while. Formerly mentored by Spread the Word, she has published quietly compelling fiction, memoir and essays, and in this, her longest work so far, she explores grief and letting go. Hopefully she’ll foray into full-length fiction sooner or later, as the intimate pacing and minute characterisation of this story hint strongly at a novelist-in-waiting ‒ and I certainly would have read this at five times the length. One Thing charts a day in the life of just-bereaved Len, reformed drinker and over-thinker, who impulsively gatecrashes his ex-wife Violet’s funeral, with results both heartbreaking and (occasionally, darkly) hilarious. “Is that what love is?” Len asks himself, hopelessly, “Just to keep on wanting and wanting to be a witness?” ‒ though he hasn’t been in Violet’s life for years, and now it’s over. Barker effortlessly inhabits tongue-tied, van-driving 58-year-old Len, and between beautifully-observed tragi-comic set-pieces, also comes up, offhand, with punch-the-air similes like this, from the final page: “Her breath goes through him like the ground goes in a lift.” Read it and, literally, weep.

In Lieu of a Memoir by Tadhg Muller

Tasmanian author Tadhg Muller has done some weird stuff in London and written some weird stories about it, and this is a collection of them, as the title suggests, “in lieu of a memoir”. Organically self-generating rather than constructed as a conventional narrative, it’s a shapeshifting blend of autofiction and psychogeography: an intermittent diary of casual jobs, forgotten nights and existential questioning, featuring genuinely laugh-aloud comic tours-de-force such as the title story, told largely via emails. In this, aspiring author Tadhg, despairing of the exclusivity of the city’s writing-workshop scene, sets up the North North London Writers’ Group (membership: 2) with his friend Poodle ‒ hampered only by Poodle living 12,000 miles away. This deadpan absurdism is carried through in Sean Preston’s meta-editorial introductions to each story, in which fact, fiction and rumour are blended to further confuse the authorship and nature of the book itself. In Lieu of a Memoir combines magical realism with kitchen-sink grittiness, erotica with social satire, and avant-garde mischief with lyricism in a genuinely original and unusual way.

This little cracker of a novelette, told in the form of fictionalised episodes from author Holly’s Nineties childhood, oozes authentic charm without apparent effort ‒ it’s as piercingly well-observed as The Royle Family or Shameless, and frequently as funny as Sue Townsend’s series of novels from the viewpoint of Adrian Mole, who is young Holly’s direct literary ancestor. (Victoria Wood and Mike Leigh also spring to mind.) Like Adrian, Holly is a small-town teen with a crush on the unreachably popular kid at school ‒ in her case, gel-haired Tom, a sort of Mr Darcy of Year Seven. Holly’s mentor/mother-figure is no-nonsense Nanny Pam, divorced from the brilliantly appalling Grandad: their sparring supplies much of the mini-drama of the stories, as well as the humour. For a flavour of Watson’s Nineties nostalgia and bone-dry Alan Bennett-esque humour: sampling a samosa, one character says “I’m sorry, Pam, they’re way too spicy for me. I’m not a great lover of Chinese food.” Later, third-rate psychic Mystic Mickey enters, speaking as someone’s dead husband Ray:

He’s remembering a holiday that they had somewhere hot. Was it Spain… Portugal… Greece? Maureen starts crying and says, Wales… he’s talking about our holiday in Wales.

Yes, that’s right, Wales! says Mickey, without missing a beat. Watson’s a real comic literary talent, and all credit to Open Pen for discovering her: catch her now before she gets her own sitcom. 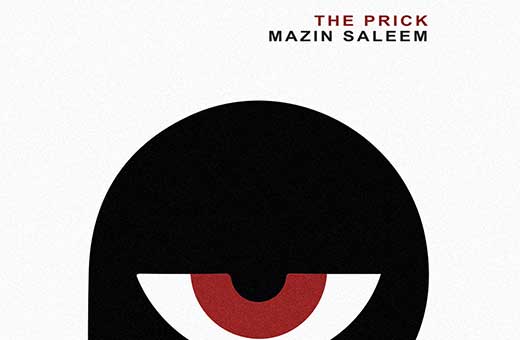 The Prick by Mazin Saleem

For me, though, the pick of a very strong bunch is The Prick, a gripping black comedy of manners about toxic male friendship, which hits every satirical, millennial nail on the head. The title ostensibly refers to protagonist Will’s accidental frenemy and literal saviour Roland, a man whose life-choices, tastes, attitudes and actions are all crafted (by author Saleem, not Roland ‒ he couldn’t care less) to cause cringe, if not outright offence. Having been saved by Roland from drowning, Will feels obligated to befriend him, but grows to loathe and resent owing this utter prick anything ‒ let alone his life. However, Will and his semi-hipster coterie don’t escape implicit censure, and a pivotal dinner-party scene where we eavesdrop on Will et al smugly denigrating Roland and girlfriend Nor’s tasteless social-media flirting is as uncomfortable as it is relatable. But it’s the climactic penultimate sequence with Will on the side of a mountain that left the deepest impression on me ‒ by far the tensest, most compelling scene in anything I’ve read this year, or in recent memory. Saleem’s Prick is both mesmerising and unputdownable. If only it were longer!

Others short fiction of note, our reviewer has enjoyed:

Hugo Award-winning American SF novelist N. K. Jemisin keeps it short for a concentrated burst of street-smart, pacy contemporary fantasy in this tale of a hunted, semi-vagrant street artist who accidentally becomes New York City’s doula and protector, as it births itself into sentience. It sounds bonkers because it is: scenes include a chase across a six-lane expressway, pursued by an amorphous, semi-existent MegaCop monster ‒ but knowing nods to Lovecraft and a sly reveal of just exactly who the narrator’s friend/mentor Paulo is make this a quick, rewarding read with an urban-mythical, Gaiman-esque aftertaste: if you loved Neverwhere, you’ll get a kick out of this.

Tell them of Battles, Kings and Elephants by Mathias Enard (Fitzcarraldo Editions, tr. Charlotte Mandell) French author Enard follows artist Michelangelo in 1506, as he is summoned to Constantinople by the Grand Turk to undertake the most important ‒  and perhaps, most impossible ‒ commission of his life: building a bridge across the Bosphorus.

Longlisted for the Women’s Prize 2019, this taut novella-in-flash, set in 1970s Communist Romania, follows Alina and her husband Liviu as their lives unravel under personal and political strain. Lush, precise prose and pin-sharp detail make every sentence a pleasure.

The women are all dead of a mysterious disease, and now mushrooms are sprouting from their graves. Storyteller Nate must make sense of it all ‒ if he can. Whiteley skilfully blends horror and fantasy in this atmospheric speculative novella.

Katy Darby’s stories have been read on BBC Radio 4, and appeared in magazines including Stand, Mslexia, Slice, and the Arvon and Fish anthologies. She has a BA in English from Oxford University and an MA in Creative Writing from UEA, where she won the David Higham Award. She teaches writing at City University, edited Litro short fiction magazine from 2010-2012 and runs award-winning short story night Liars’ League, which has been named by The Guardian as one of the UK’s top ten storytelling events (www.liarsleague.com). Her novel The Unpierced Heart (previously The Whores’ Asylum) is published by Penguin. She lives in London, tweets @katydarbywriter and is online at www.katydarby.com.

We’re a small team of volunteers who spend many of hours each week working to build TSS and the short fiction and non-fiction community. We read, edit, and publish work we love (and pay for it). If you enjoy the site, please consider helping us through the long nights, thank you.