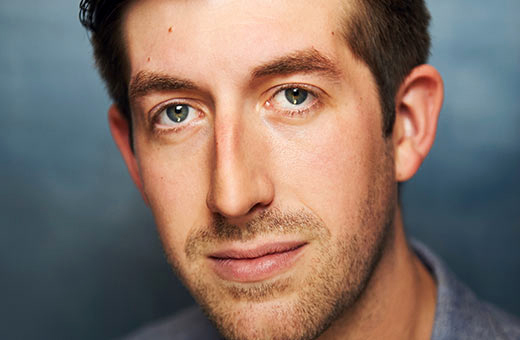 It was a copse viewed by the artist from across a river, that much was clear, at first. The way vermillion bled into jade, just so, with emerald swirling around flecks of white and yellow. Birds. Birds in trees. In canopies. A swathe of ivory slicing across below, before a twitch of blue snatched your attention over the ochre of sandstone: bricks and flags, a bridge the artist had not used but instead captured and let me travel in their place. It was wonderful. I had never seen anything like it. I wanted to make sure I was right, that I had understood it properly. That was where the trouble began.

When I returned to the gallery the next day it was different. It had changed. I looked closely, as I had the day before and there was no doubting it. I had been told such work was open to interpretation and might seem altered on repeat viewing, that it would be me imposing a new meaning on the canvas but I knew as soon as I looked that this was not the case. The painting was transformed. I told the guard.

“This is different,” I said.

“There are other works by the same artist. Perhaps you’ve confused them.”

“It hasn’t been changed.”

“It has changed, though.”

The guard shrugged uneasily and returned to his seat in the corner of the room. I sat before the painting and tried to make sense of it. It was darker today, and there was an overabundance of reds. Violent shades. Unsettling whorls. It was a cityscape; smokestacked, visceral, angry. Here a chimney spurted murk into the sky; there soot blackened a windowpane. Carcasses drifted in polluted water — slicks of paint which only yesterday had seemed verdant and rich, fluttering and leafy; now slimy and turgid, the backed-up lifeblood of an industrial heartland. I did not like it. The gallery closed. I resolved to visit again the next day, to clarify what I had seen.

Thus began a daily ritual which lasted several weeks. Every day I returned to the gallery and reexamined the painting. Every day I told the staff on duty in the gallery that the painting had been changed overnight. I chastised them as remiss in their duty, one eye on them and the other on the agrarian vista; the night sky; the charnel house most freshly conjured by the adulterated paint on the sorely used canvas I came every day to watch. They insisted the painting was unchanged (though I knew they lied, and pointed out that they were only gallery attendants, not, as I knew they should be, properly guards. Besides, one pointed out, they weren’t in attendance overnight so these changes I was imagining could hardly be said to result from their inexpert care. I should take it up with the nightwatchmen, one said, and of course I did, but they too denied all culpability for the transformation of the image I had so briefly adored.

By the second week I was known to the gallery staff both by sight and name. They tolerated my presence reluctantly though I alone, eagle-eyed, sought to safeguard the abused artwork which took pride of place in their contemporary collection. They might have shown some gratitude. I arrived at the gallery when it opened and left only when it closed. I ate packed lunches in front of the ever-changing canvas and watched the other visitors closely, unafraid to rebuke them should they come too close, or should pairs of them divert my attention one from the other such that a wretched sneak might make alterations without my noticing.

Nothing occupied my mind except the question of who was traducing the painting. It was not always changed for the worse, mind. Sometimes I would arrive at the gallery to discover on my darling canvas an astounding scene in which pigment seemed to have been substituted for pure emotion and every brushstroke became a conversation, every spray and splatter of paint a concept in a vast and joyful web of oil-based philosophy, but that was beyond the point. It ought not to have changed.

It was clear to me by this time that some trickster, some malevolent philistine or sensationalist hokum artist, some vandal with a one-word moniker more often read in spray paint than spoken in polite circles must be responsible. Who were they, though, and how were they enacting their vandalism?

I came and went; I watched and waited; I wept and raged at the veiled truths and barefaced contumely displayed in the changing work. It occurred to me that if the painting was being reworked every day (which it was, whatever the protestations of the gallery attendants) then each layer of paint must be adding depth and thickness to the canvas. I contrived to measure that thickness. At first the attendants tried to prevent my access and once they even had the audacity to remove me from the gallery — something I later realised bespoke a continuing pattern of obfuscation and impediment consistent with collusion — before they were forced to admit I sought only to protect the work. To my frustration, upon measuring the depth of the canvas and the paint thereon, I was never able to register a change in thickness. Initially I blamed the inaccuracy of my measurements and tried a variety of instruments to gain more accurate readings. I availed myself of tapes and measures and little devices with lasers but none registered a change.

I find it difficult to think back now on how slow I had been, on how completely I misunderstood the data I was gathering. I assumed myself in error, or my instruments, and so went by another week in which none but I had the sharpness of eye and sceptical perspicuity to see the changes to the work, or at least in which none but I was honest enough to admit them. Clearly I was beset by conspiracy on all sides, perhaps even the subject of some painterly gaslighting. The world is a dark place these days, and people cruel — it is not beyond the bounds of credibility that someone was trying to drive mad anyone with enough devotion to the painting to see it change and have that truth denied them.

“It’s non-figurative,” the curator said to me one day, as I tried to explain what was happening.

“Don’t be absurd. It’s a man strapped into the gears of a machine. It’s crushing him,” I said in disbelief.

“Yesterday it was the Milky Way and a grand migration of souls through the stars, but it has been changed! Look at it!” 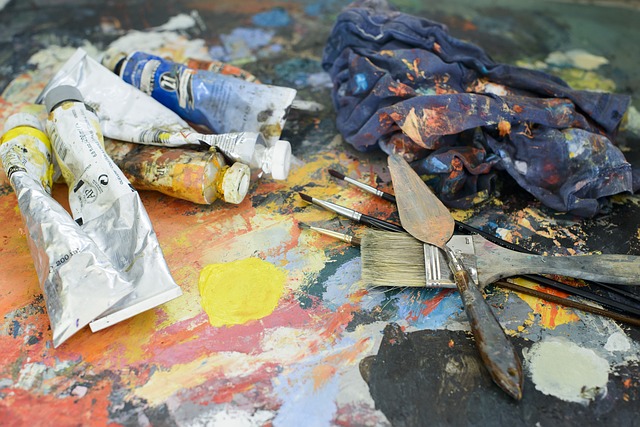 I turned the curator toward the canvas, where flesh intermingled with steel in a thick mash of peach and pthalo as though Lucien Freud were painting a scene by the Chapman brothers, decaying and hellish. He looked for a while, then turned his bland features back to me and said, with no more feeling or artistic sensitivity than a blancmange, “It’s an abstract painting. You bring your own meaning to it.”

I could not believe that he was an idiot, since he was senior to so many involved in the enforced delusion, which meant he must be instrumental to whatever perfidious scheme was being carried out. I stopped speaking, lest I give him further satisfaction with my evident distress, or let on that I knew what he was about.

It was not a sense of personal injustice which led me to take action, but rather a concern that this devilish gallery should be so abusing its audience, seeking to drive them insane, playing them for fools by perverting the sublime and then denying the whole vicious racket. It could not be borne. Something must be done, lest it be said that the people of this corner of south London had a propensity for madness, which it surely would, if events were allowed to transpire such as they were, without intervention.

I should not say more, for I do not know who might be listening. I have no wish to implicate myself to the satisfaction of those involved in perpetuating this conspiracy.

Let me say that I love art.

My lawyer tells me that I am responsible for eight figures’ worth of criminal damage and that the charge of vandalism is levelled against me. Me! I am no vandal, I tell him, but he seems as little interested in my version of events leading up to the so-called vandalism as any of those invested in the conspiracy to drive me mad.

Apparently, the morning after the painting was blackened, the attendant who discovered it was heard to remark that it spoke to her of loneliness and obsession, that she thought it a remarkably sad painting now, filled, paradoxically, with emptiness on both a personal and cosmic scale. All of which goes to prove me right — it must have been visited again, changed again. The gallery tries to continue the lie, insisting that the canvas remains pure black, but the testimony of that first attendant proves it — after I threw the paint the vandal or trickster or imp returned and repainted it! That was the whole purpose of my undertaking! If I could reduce the painting’s meaning to nothing and demonstrate incontrovertibly that it was changed in such a way that even that pigment-sapped curator could not deny, any subsequent alteration would prove me right!

I am speaking carelessly now, and perhaps that is unwise, but I will rely on your discretion and, besides, my vindication necessitates it. I was sucked into that painting, and ridiculed for my fascination by whatever changed it (for I am less convinced now that it must have been human agency) and now that same undisclosed agent ridicules the very people who were complicit in the events which led to my incarceration for, though they try to maintain a three-line whip on meaning, the honest among them admit that, even while I have been in here, the painting has changed. It has been removed and washed and rehung and slashed and restitched and, though they insist it is the same, it is not. 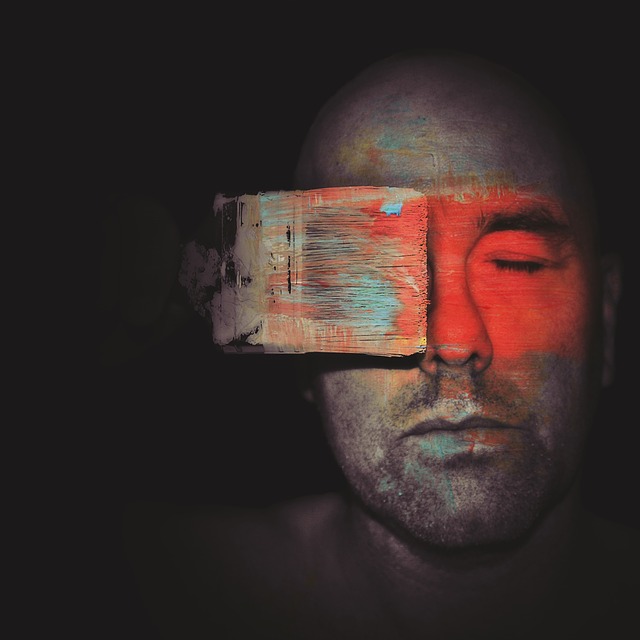 I have begun to paint, as well you know, while I await trial. I am told the results are unsettling, but that is not my fault. It is the fault of whoever creeps into my cell in the night and paints over the previous day’s work. I intend to break my fingers later today to prove that it is not me. If that does not convince my psychiatrist, I plan to stay awake until I catch the perpetrator. I will be released from here and, when I am, I refuse to allow anyone else a monopoly on meaning.

You will watch closely, won’t you? Your vantage point upon the wall above my bunk commands a clear view of the cell and I have painted you with such eyes that nothing will escape your notice. If the thing comes in the night to to obscure or change you, you will cry out, won’t you? You will alert me? Good. You, at least, will do as I do. That is your purpose.

I see things for what they are. So shall you, little painting. You will speak my truth to any that ask it of you.

Keep watch, for the lights will be turned out soon.

Patrick Warner is a young actor who has been writing for a little over a year. He has had success with his short fiction since then, with his most recent work forthcoming in Shoreline of Infinity magazine.