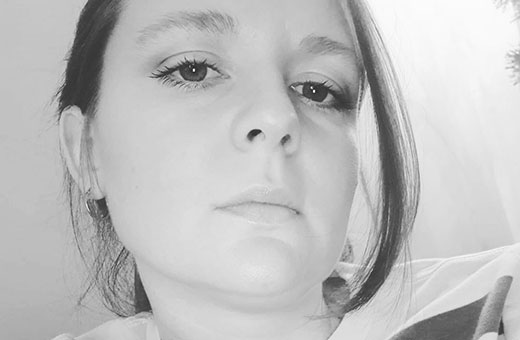 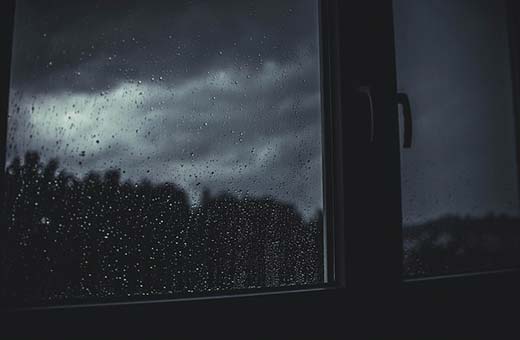 I’ve become a haunted woman. When I walk to the bathroom in the middle of the night, I do so under the supervision of ghosts. In the darkness I’m a child again, quick with terror while they reach for me with the softest of hands.

In some ways, I only have myself to blame. I’ve never been a good sleeper, so when I wake in the early hours I make sure never to turn on the light (apparently staying in darkness makes it easier to slip back into that tumultuous world of dreams). But this rule of mine now leaves me vulnerable, leaves me having to take a piss in the dark.

Doors left ajar are just invitations for something to come and peer at. In our flat I’ll call my boyfriend’s name at random, his reply telling me he is near, that the creak of the floorboard is just him carrying on his un-haunted life.

I’ve always had suspicions I was haunted. Even as a young girl, I could never sleep facing the wall or stay upstairs too long by myself, because I’d always have a sense something un-seen was gaining on me. I used to be able to ignore the warning signs; the queasy sleeplessness, the tricks-of-the-light, the looming presence, the noises I’ve heard in every home I’ve entered my entire life. But that’s no longer possible, I’ve joined my life with another’s and now must accept my fate.

Maybe I should tell you how this all began?

We’re to be married, so while my boyfriend and I wait nervously, we go on holiday to break up the slow march towards our destiny, our matrimony. Last October we took a train to a small seaside town. We spent the weekend walking the coastal paths and sleeping on a mezza-nine in a studio that was once an old sweet shop. We listened to music. My boyfriend likes dull nineties bands that disappeared into obscurity long ago and for good reason. I played him girl band covers of the rock songs he loves. Despair crossed his face like a child searching for rea-son when a flat foot crushes his sandcastle.

We also watched a lot of television, this one show in particular, about a beautiful old house full of the same shadowy ghosts that now follow me. Only in this show, the ghosts haunted beautiful people, actors who made being haunted look easy, or at least more manageable. In every scene, a grim face lurked behind the actors with their symmetrical faces, usually while they searched for pickle jars in the pantry, investigated sounds in the basement, heard a chiming in the playroom only to find a long-broken music box singing a tune.

Three, sometimes four episodes a night we’d watch before going to sleep. Too much television can make me feel strange and infect my dreams and sense of reality. But my boyfriend urged us on. Once, during episode five, at the appearance of a shrieking woman in the middle of a road, his face contorted in such a way I thought only one of us would return home from our holiday alive.

Our problem is we aren’t moderate people. We give the impression we are level-headed individuals but in truth, we are gluttons, well suited for these modern times and each other. We don’t always act on our instinct, but when we do it’s hard to look at each other, sat in the remnants of our defective personalities; the piles of food containers and wrappers, the burn from too much sex, the stink from not washing, the snap of our bones after sedentary stretches of time. I feel our love most then. Its feels good to have someone to do these things with. That’s why being haunted is so difficult. By nature, it’s a solitary practice.

Eventually we settled down to sleep, our toes brushing the flanks of the roof that sloped down not far above our heads. That night I dreamt of a young man who stood beneath us, waiting between the vintage writing desk and the brushed chrome coffee table scattered with the usual Airbnb detritus. The man had dark hair and darker eyes. He didn’t move, just waited. He looked a little like someone we once lived with before we had our own place. He looked a lot like an ex of mine. I woke at some point, the mass of my boyfriend next to me, the blueish alien forms of the room set like a stage below. It was cold. We’d been instructed to leave the VELUX window open to stop the damp from rising.

Next morning, we got ready to go for a walk along the beach. I had a headache. I brushed my hair which was a little flat and told my boyfriend of the young man in my dream. He carried on tying his boots then told me I looked tired. I lacquered my eyelashes open with mascara and asked him to help me tie my hair back the way he liked.

Along our walk, we came upon a castle that had been preserved to reflect eighteenth-century living. The walls were painted in Farrow & Ball. The narrow corridors had been decorated with fake cobwebs and were blocked by expensive prams. The castle smelt of filter coffee and sour milk, so we decided to explore the gardens instead.

I felt groggy but being on holiday meant I was able to tap into the same energy reserve I use for when I truly want to enjoy myself. My boyfriend suggested it was the mattress or the sea air clearing my sinuses. We followed wooden pumpkin signs, part of a children’s treasure hunt, and among the trees spotted mummified pre-schoolers and toddlers with axes sticking out of their heads.

In the distance a man in green overalls stoked a smoking bonfire. I made a droll comment, that English Heritage was honouring the holiday and their patrons by holding live witch trials. My boyfriend laughed at my joke. He’s sweet. He doesn’t envy people who can do things better than him.

We joined a tour led by a guide in a bloodied Victorian dress. Our intrigue, and the tour guide, brought us to a small ravine at the edge of the garden, a newly excavated pleasure garden. Children careered up and down its muddy banks, grasping the delicate undergrowth to help them climb and gain footing. I wondered if this was the kind of pleasure the garden had been intended for. Or was the pleasure garden a thinly veiled metaphor for where the lord liked to screw his mistresses? The tour guide wouldn’t answer my question.

On our way back to the castle we must have taken a wrong turn, for we found ourselves in the moat, now dried up and grassy. We sat on a bench. My boyfriend sawed his thumb into the wood while I worked my fingers along his cranial ridge, keeping my eyes overhead towards the balustrades in case a grey face appeared against the pale sky. My boyfriend’s features are so fine, slender nose and sunken eyes, nothing diverging from its prescribed boundaries. Whereas I fluctuate in weight and attractiveness (an ever-fluttering dust sheet in a draft, restless and formless) his tendency towards excess remains unreadable on his face and body. He holds an innocence I cannot shift. He feels the world has bamboozled him and he’s probably right. Where I’ve always expected my fate, he never saw this coming. 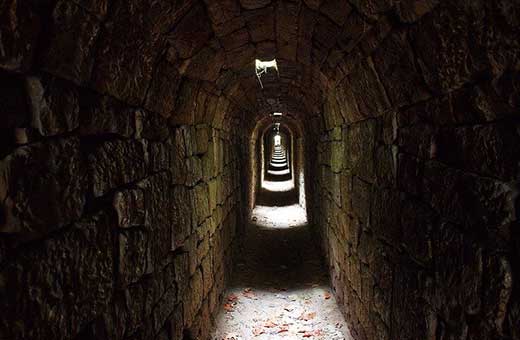 Down in the depths of the castle, a series of tunnels connected the bare subterranean rooms. There was no decoration, not even floorboards. I imagined the tunnels had once been used for food storage or servants’ quarters and was surprised to come upon an information plaque that said it’d in fact been a playroom. There was an illustration, a girl in a wide skirt and headband like Lewis Carroll’s Alice. She sat on the ground brushing the hair of her doll, a limp limbed thing with a heavy, naked torso. In the background a smaller boy in a sailors’ outfit dumbly rode a rocking horse. I couldn’t think of a worse place for children, although at that moment, as if to mock me, four boys came roaring past wielding wooden swords.

We passed through one room to the next. Back where we had started, a family were crowded around the mouth of a smaller tunnel carved out into the wall. While the adults consulted each other on the perils of the tunnel, a blonde boy and girl wearing Viking helmets that squashed their noses looked desperately on. Eventually, the adults shook their heads and moved away, drawing the pleading children along with them, their potential adventure unrealised.

While I watched this, my boyfriend pressed his palm to the sandy wall then balled his fist above my head. He grinned as he released the grit. I barely felt it, but I pushed him hard anyway, his foolish smile slipping into vexation as I wiped my face. He believes he is perfec-tion and he is most of the time. But I believe that holding yourself in such high esteem warrants some chastising every now and again. I swore at him and he sloped off. The child in him had been scolded, the man in him revealed to be an idiotic prick. And how quickly he disappeared into that next room!

It was with the same trepidation I used to feel going against my parents’ wishes that I knelt before the tunnel’s mouth and peered inside.  It smelt of minerals and damp, like the house I’d moved to as a child, the bare floorboards and walls remaining that way until my parents could afford carpet and paint. My shoulders only just fit, the rest of my body left out. I pressed myself further in, blocking out most of the light, no longer able to see the end of the tunnel, only the enveloping darkness. It was a tight fit but big enough for what had been waiting for me. There was movement at the back then it surged forward and take hold of me. And realised I then that I was not alone and never would be again. I’ve joined my life to another’s now and must face the reality of the one I will probably have, peopled by haunted children and haunted houses with my haunted husband.

By the time I felt my boyfriend pulling me back out, it had started. As I stood to look at him, the man who would one day not be the man I love but the man I have, the man I’ll most likely haunt for the rest of my life, the clarity of fear made me feel both alive and dead. And by the tunnel he looked at me the same way he’d looked at the beautiful actress who’d screamed in the road; terrified because he was not only bound to me, but also to my fear.

Lauren Alonso Miller writes short stories and sometimes novels. She has been shortlisted for the Bridport Prize and published in Five Dials, Mechanics Institute Review, Spread the Word’s City of Stories Anthology and online. She studied an MA in Creative Writing at Birkebck, University of London.