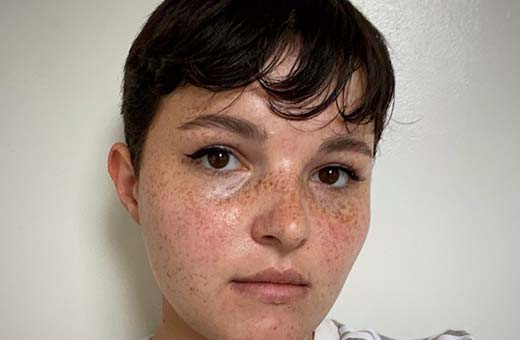 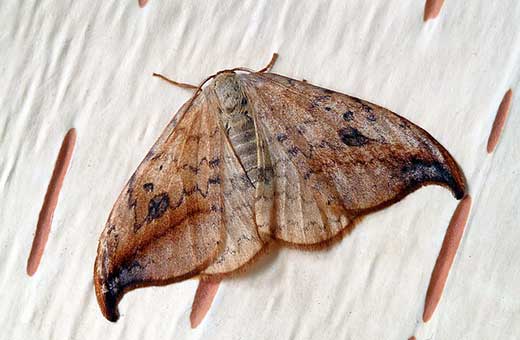 Alice pulled the flowers from her mother’s crystal vase and threw them, yellow and bright, into the bin. They barely made a sound as they hit the bottom – but the baby stirred all the same.

Rosy-cheeked and wide awake, it mocked the blackout blinds she’d made her husband install and stared right at her as she opened the door.

The last blind rolled up and revealed a single moth sitting on the window pane. Alice quickly pushed open the window and jumped back.

Please, she asked it, please go away.

Neither Alice nor the moth moved. Relenting, she swung the baby up and over the bars of its wooden prison. It reached for her necklace and she swatted the hand away, backing out of the room with one eye on the moth the whole time.

The nursery had waited four years for an inhabitant. Her body too sat hollow and impatient. But it would not cooperate, just as the wallpaper they hung the first time peeled from the walls, revealing damp beneath.

The room had been a nursery, home office and now a nursery once more. When they transformed it from nursery the first time Alice had wielded the paintbrush like a knife, obliterating the past with an ochre and eggshell colour scheme. There was only one small corner of the room where the wallpaper had refused to budge and that had been covered mercifully by a new chest of drawers. Over time, she almost forgot it was there, and only on searching for a missing earring did she find herself face to face with a teddy bear defiantly smiling through a slick of paint.

Babe in arms, the pair danced back into the kitchen. Alice sat the baby in its throne at the head of the dining table. Opening the freezer she presented the options: the vegetable stew (blended) uses marmite as its secret ingredient but ah! the pork chop with peas (blended) has a fresh mint kick at the end!

When they’d eaten it a few weeks back her husband had laughed at the third portion she made. Talk of ‘the French technique’ flew over his head until the whirring of blades commenced.

The baby doesn’t care, he protested, I don’t like watching my food disintegrate only moments after I have finished eating it!

All the same, their meals went in the blender one by one.

She looked into the baby’s blue eyes and decided it wanted pork chops. As the food slowly defrosted in the microwave, Alice gazed absentmindedly out of the window. Theirs was the top floor flat in a big converted Edwardian house at the top of a hill. From here she could see the whole city – an expanse of other windows, other women blending organic meals; Head Girls turned marketing/pr/comms executives with marble countertops and specific coffee orders dancing to the beat of a baby’s drum.

She checked the defrosting lump and noted the suspicious silence in the room. With a spin, she expected to discover its little body sprawled on the floor. Or perhaps it would still be in the chair, blue in the face, having choked on nothing out of spite. Babies do that you know – die for no reason.

Last time, right after it happened, she couldn’t enter the room at all. The door was sealed off by invisible cement.

If they were to start again, her husband reasoned, Alice would have to go in – at least to collect the things she wanted to keep. She stood for ten minutes clasping the cold handle before she entered, alone in the flat on a Tuesday afternoon. The blinds were open and the sun shone merrily into the room from the skylight, filling the space with a warmth that felt like an affront. It was exactly as she’d left it, the crib in the corner, a blanket folded over the end. Her mother had told her about the superstition but she bought the crib early anyway, named the baby anyway, loved it anyway. Now the crib taunted her, speaking the ‘I told you so’ her mother would only think.

Eyes closed, Alice ran through the list in her head. The battle plan. Empty the chest of drawers. Unpack the wardrobe. Fold each tiny outfit up and place in the reusable shopping bag. Remove the Peter Rabbit figurines from the shelf. Wrap in bubble wrap and place in the bag. The rest he could remove and burn for all she cared.

She crossed the room and opened the bottom drawer, crouching down, starting her silent prayer. At first she thought perhaps her eyes were betraying her, but as she stood back the image came into focus. She watched the little merino babygrows and cashmere cardigans writhing around in the drawer as if moved by a phantom puppeteer. Like an undulating sea the fabric shifted and pulsed.

She pulled a jumper out and with it they came: hundreds of tiny brown moths. Out they flew, in her throat and her hair, filling the room and landing on the blanket at the end of the crib; defiling everything they touched. The small garment she held in her hand was constituted almost entirely of holes.

Alice tripped back onto the floor, panting as she watched the room fill with perverse life. She was still on the ground hours later when her husband came home.

On appraisal, this baby was still living. Alice felt relieved and the baby, shocked too to be alive, let out a burst of exuberant gibberish and smashed its fists against the dining table. With a thump thump it shook the porcelain candlesticks Alice had arranged and before she could act, one of the pale blue candles slipped loose, rolled off the table and shattered on the ground.

It was the smallest candle of the three. Alice had burnt each one specifically to vary their heights and they had sat on the table undisturbed for a year at least before the baby had arrived.

She pushed it in its chair across the room as she gathered the pieces of wax in her hands. She sniffed and closed her fist tightly – turning to fetch it to the bin.

Before the candles had graced the table, she had stood them on the desk in the nursery turned home office. During this time she had simply refused to go through it all again. He had sat across from her on the velvet sofa she’d restored by hand, and suggested it in the same manner he might recommend they try the new Italian restaurant on the corner.

Every time he touched her she felt the need in his hands, not for her body but for what it might do for him. Her breasts already feeding a child that refused to grow. Eventually they’d reached an uneasy truce. I need you tonight, he would whisper in her ear. At dinner with friends his hand would find its way to her thigh, sliding up throughout the evening reaching for her, brushing against her. I’ve missed us, he would say as they hinged themselves together.

Each time she would lie there, staring at the window watching in the reflection as he debased himself, lying to them both.

For a year or more her period came like clockwork. She could tell almost instantly when the familiar pain in her breasts arrived. For two weeks she would keep the secret to herself like the stash of licorices she stored in a shoebox at the back of their shared wardrobe. Her husband would light up when she skipped the wine at dinner just in case – the whole time laughing to herself on the inside.

But it was only so long before she found herself in the doctor’s office, agreeing to once again begin the injections, to use medicine to defy what her body had already told her. You fool, I have salted this land, she laughed. But nature, God or science laughed back and here she was, treasured babe in arms.

In the kitchen, she turned to inspect the baby once more but the sight that greeted her stopped her in her tracks. Atop the baby’s head, just below its sweet blonde curls, a moth sat. It crawled across the baby’s face and Alice felt the impulse to wipe the moth from her own forehead as if they still shared one body. She dropped the candle pieces, dashed across the room and opened the sash window above the sink, flapping her hands towards them both.

It stretched its wings but stayed perfectly still. The baby grinned.

After a moment, she moved to exterminate the creature. But before she could reach the pair, the baby’s chubby little fingers reached up first.

In one swift motion, she watched as the baby put the moth into its soft mouth – and ate it. Her fingers were next. Prodding, she searched fruitlessly in its gums until the baby coughed and she withdrew.

Alice bit at the skin around her nails and retched like a sick dog into the sink. After a moment she steadied herself and looked to the window, seeing in the reflection a moment four years before.

It’s dinner time in their home and she eats too much – her hand resting on her swollen stomach, his hand on hers. A greedy little imp tonight, he sighs, nuzzling into her shoulder. She laughs with the sound of clear bells ringing and they go to bed hand in hand.

In the night she wakes and gazes at his sleeping face, those soft dark eyelashes. Places a gentle hand on his cheek as his eyelids flutter. Half awake but wholly hers. It’s only when she rises to fetch a glass of water that he speaks. Oh God he says, oh God, and as she turns part of her expects to find him clasping his heart.

But he points and when her hand follows she finds she’s the one dying.

The sheets hold onto the stain like Lady Macbeth. They burn them in a trash can in the garden and the ashes float in the air.

After a moment the vision clears. From where she stands it is only the baby staring back at her, wax trodden into the rug. Later, when her husband gets home, she finds herself not mentioning the ordeal – even though she tells herself she intended to. She describes the few days he’s been away as unremarkable, peaceful even.

The setting sun streams in through the windows and the three of them are illuminated in a dark orange. He raises the baby up and kisses its face – his lips touching the spot where the moth had sat.

Molly Skinner’s work has appeared in print on her mum’s fridge and in the body of emails entitled “could you proof this?” Formerly she co-managed the indie press Peirene Press. She has an MA in Art History from the Courtauld Institute of Art and this is her first published work.