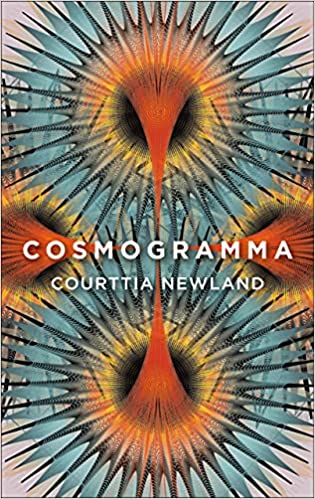 Is speculative fiction especially well-suited to the short story? There is certainly a strong tradition of writers who have created memorable work from combining the two. Ted Chiang, Philip K. Dick, Isaac Asimov, Shirley Jackson, Ray Bradbury, as far back as H.G. Wells and, the forefather of the contemporary short story, Edgar Allan Poe – they have all found ten to twenty pages the right length for their own brand of otherness, as if their vivid colours were complemented by a smaller canvas.

It feels a natural fit for Courttia Newland, acclaimed master of the modern short story (his piece, ‘Reversible,’ just one of many examples) and, earlier this year, the monumental futuristic novel A River Called Time. His new book, Cosmogramma, continues his speculative work through a collection of short stories, each one a new way to amplify the dimensions of the known world, to generalise from current trends and depict where we might end up.

At which some will respond: oh, genre fiction. Hard pass.

But is there something intrinsically unliterary about such science fiction? Is this use of generalising to animate a story at odds with the author’s craft? In her essay ‘Place in Fiction,’ Eudora Welty writes that writers must ‘step down from the general view to the close and particular.’

In Newland’s writing we see the limitations of the general and the possibilities of the particular. In the opening of ‘Cirrostratus’ there is a non-committal description of a dystopian landscape: ‘everything else was motorway lanes, churches, farmhouses overrun by weeds, vast, empty spaces.’ Such generalities feel rushed, as though setting was unimportant to the story, a listing where a more particular sense of place would have provided balance. How present was the narrator here? How present can the reader feel?

Compare this to a description of a transporter in the title story, ‘Cosmogramma’: ‘It was red like the earth beneath its wheels.’ The image gives the story a stage, a terrain and herein the promise of a palpability.

Newland writes beautifully at times, one story ending with the resonant ‘I search the heavens with a finger although, as much as I try, one glistening star looks much the same as another.’ Although the narrator’s despair is out of sight, in the cumulative effect of the story on the reader, we feel it passionately.

And where in places the language can clank with a hackneyed expression, elsewhere he brings to bear the full range of his writing craft. ‘You Meets You’ reveals a narratorial assuredness that moves from a sly levity; ‘you are holding the paintbrush, unsure of what might happen next, or indeed, how to make anything happen at all,’  to finish with an ingenious wrenching of the gut, as the rules of the story lead us to see ourselves from a distance, striving to stay alive: ‘a tiny figure drags himself ashore.’

In many of the works in the collection, the speculation is a furthering of a world we recognise. The augmented circus performers in ‘Cirrostratus’ inhabit the same position in society as freaks in Victorian days; the stories ‘Link,’ ‘Control’ and ‘The Difference Between Me and You’ all amplify modern day xenophobia.

Stories like ‘Buck’ and ‘Nommo’ posit alternatives to this small-mindedness. The characters here are faced with the other, the (literal) alien. In astonishing ways they are challenged to open themselves and, most tellingly, their futures to strange ways of living.

Some stories turn on basic human fears: ‘Control’ opens with an urgency (‘a scratching close in his ear that made him jerk like a sleeping dog, eyes open, seeing nothing’) that propels a story about the threat of the ‘Immigration Control,’ a racist militia. ‘Dark Matters’ riffs on a different contemporary concern – a promising artist follows his friend beyond the threshold of the known world, unveiling a morality tale which traces their trespass to its ultimate and spectacular oblivion.  ‘Percipi’ tells the story of the Buddy 3000 robot, intended as all-purpose helpers, though soon lead to a war between human and machine.

One of the strongest stories is ‘Seed,’ an unsettling tale about plants that grow out of control, swelling unstoppably to form strangely recognisable fruit.

If the language sometimes seems in a hurry it’s because the emphasis on pace and event make these stories accessible to all, stories written with democratic principles, stories as blockbuster films.

The lyricism is more apparent in the content than the form. With his depiction of beautiful and strange ways of living, Newland uses the most essential function of story – its ability to ask questions of its reader.

Tom Conaghan has published short stories in MIR Online, Neon literary magazine and the STORGY fiction prize anthology 2019. He works as an editor for Bandit Fiction magazine and is currently writing a novel about an eighteenth century imposter.