SHORT STORY REVIEW ‘EACH OF US KILLERS’ BY JENNY BHATT 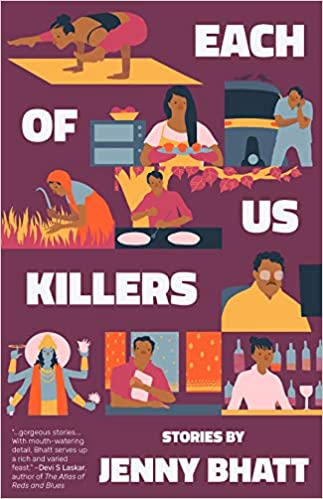 Each of Us Killers is the debut collection of short stories by Jenny Bhatt and is worthy of close attention. Bhatt is of Indian origin, but now lives in the USA.

As the title suggests, she is interested in how we constrain people by defining them according to their origin (caste), belief system (religion) and biology (gender), and in what people do to try and overcome those constraints. So, the prime motivation of many of her central characters is financial survival, the hope of a better quality of life and, especially in the case of women, the achievement of personal autonomy. For example, in ‘Mango Season’ Rafi, a slum-dweller, who works as an assistant in a high-class wedding emporium, yearns for promotion and the opportunity to express his artistry through his role as a salesman, while Heena in ‘Lifespring’ is learning to stand on her own two feet economically and seeking emotional and physical affirmation after leaving a brutalising husband.

Bhatt navigates her chosen terrain with empathy for the people she writes about (whatever their social status), sensitivity to the nuances of social interaction, and a good eye for the telling detail. When her central character is a middle-aged woman, you feel that woman’s anger tinged with weariness. And when she writes about the poor, she writes with a compassion based on respect. She’s politically aware and is not afraid to deal with the contentious issues that trouble society.

Most of the stories in the book are set in India, and this is where she is at her best. This is a country that has a sophisticated constitution, but enormous difficulties enforcing it. As a  ‘developing’ nation, it’s a place where poverty and wealth run cheek by jowl; where kinship systems and village ties play more of a role in the unregulated labour market than employment legislation does; where inter-caste disputes are settled beyond the reach of officialdom; where young women are struggling to choose between a traditional role in family life and a paid career; where there’s lots of money to be made if you only abandon your scruples; and where the middle-class are totally dependent on what is probably the largest servant class in the world. Bhatt tackles all of these issues and does so in stories that are moving and which sometimes deliver an unexpected punch. The following are all remarkable:

‘Neera’s New World’ is the tale of a young live-in servant girl who makes herself vulnerable to sexual exploitation by a fellow employee by trying on her mistress’s clothing. The thrill the girl experiences as she puts on her mistress’s expensive lehenga, worth more than a year of her own salary, is almost palpable. But then comes a toe-curling account of sexual harassment that most women will recognise: ‘A familiar millstone-like pressure pushed all the air out of her lungs… every time she walked past the main entrance where he lounged…’

In ‘Time and Opportunity’, a Muslim man struggles to make ends meet running a street food stall in a fashionable part of Mumbai. His religious principles blind him to a wrong being perpetrated by a co-religionist against a Hindu employee. When he eventually recognises his error, it’s too late to do anything about it. This story cleverly delivers the insight that bigotry may stem from lofty causes. And if that’s the case, we might all be guilty of it.

‘The Prize’ illustrates how corruption works among the rising middle-classes. An architect in the process of establishing his business is desperate to win a contract from a more powerful wheeler-dealer. At first, he’s mystified by the double dealing that is being suggested to him, but finally, all becomes clear. The hideous Manoj (the wheeler-dealer) and his equally awful wife are eminently recognisable, and the first-person narration means that the reader effectively experiences the process of demystification at the same rate as the central character.

‘Lifespring’ is a stand-out story about a woman dealing with the social snobbery of her neighbours and the misogyny of her bank manager while trying to build her own bakery business. She finally achieves her liberation through a glorious sexual encounter with a Christian and, therefore, someone to be looked down upon.

‘The God of Wind’ is a neat little tale about life at the bottom, and how, just when you think things can’t get any worse, they do. An exhausted rickshaw wallah on his way home from work is faced with a dilemma he can’t avoid.

Bhatt’s Indian stories run almost the full social gamut, ending with two shocking tales of communal strife and brutality set in rural communities well beyond the rule of law. The last of these, which gives its title to the book, concerns the violence perpetrated against the country’s Dalit communities and the state’s inability or unwillingness to deal with it.

Bhatt wants us to know that the poor are not poor because they are feckless. The shop assistant in ‘Mango Season’ is of poetic bent and lands a sale by quoting a flattering couplet to his wealthy customer. His name associates him with the famous Indian playback singer, Mohammed Rafi, who sang religious songs as well as secular ones. The weary rickshaw wallah in ‘The God of Wind’ phones for help but gets no answer because the boy we assume is his son is ‘probably still at his tuition class’. There’s a clear sense of people trying to make a go of things against the odds.

Bhatt writes exceptionally well about positive sexual encounters. ‘When we released each other, it was as if we also released something from within ourselves, letting go with both relief and sorrow,’ says Heena in ‘Lifespring’. ‘My knees curl, and my thighs turn to liquid,’ says the dead wife in ‘The Waiting’ describing the start of her married life. ‘His nimble fingers untie the three buttons holding my blouse together and it billows open sweetly like clouds parting,’ she says. It’s only when you read some of these stories, that you realise how rare it is to read about sexual passion from a female perspective, and especially from the point of view of women ‘of a certain age’ who are pondering the changes to their bodies and their expectations.

Several stories in the collection are set in the USA and the UK. There are also a number of vignettes about women in the workplace which could be set anywhere. East and West come together in ‘Pros and Cons’ which deals with the fluidity of the modern world: itinerant Indian yoga teachers teaching foreigners on Indian beaches.

I found the stories set in the West less compelling. The structural concept underpinning ‘Return to India’ needed more work to be convincing. And I struggled with the vignettes because they didn’t deliver anything new for me, though perhaps they would for Indian women new to the labour market.

We rarely think of a collection of short stories as being a ‘state of the nation’ work of fiction, unlike, say, Preti Taneja’s magnum opus We That Are Young, and yet added together, that’s really what the Indian stories in this book amount to. I look forward to reading more.

All credit is due to Jenny’s US-based publisher, 7.13, who are dedicated to publishing works of quality that the ‘Big Five’ ignore, for choosing this work and running with it. But Jenny deserves an Indian audience too. I hope she’s going to get it.

Janet H Swinney is a repentant education inspector from the North East of England who now dedicates her time to fiction and yoga. She has a long-standing connection with India and her experience of life there has deeply influenced her writing. Her stories have appeared in print anthologies and online journals in the UK, India and America. She has had listings in many competitions including Fish and the Commonwealth Writers’ Prize. She was nominated for the Eric Hoffer prize for prose 2012 and was a runner-up for the London Short Story Prize 2014.

Her first collection of short fiction, The Map of Bihar and Other Stories, was published in 2019 by Circaidy Gregory Press. It was positively reviewed by The Irish Times and got a special mention in Best British Short Stories 2020. Her second collection, The House with Two Letter-Boxes will be published later this year by Fly on the Wall Press.
www.janethswinney.com