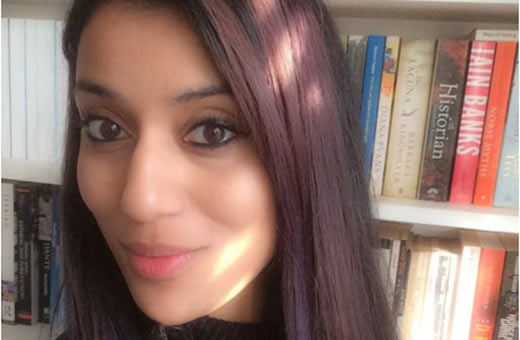 Exercises in Control is a compelling short story collection by award-winning writer Annabel Banks and I greedily swallowed it whole. Each story stands alone though there are strong themes of free will versus invisible external forces, of harm and safety, that weave themselves throughout the collection.

The first story in this collection titled ‘Payment to the Universe’ sets the tone for this rest of this collection and begins with a cleaner commencing her shift in an office. We get lost in the minutiae of the protagonist’s routine and internal monologue before we are led to a concluding scene that pulls the reader up sharply. This story introduces the reader to an ever-present theme of rules and control, inviting us to question the rules that are opposed upon that characters we meet, whether they be self-imposed or forced. At one point the cleaner in this story bargains with cosmic forces, reasoning that a deed completed during the shift will pay off positively because, ‘It is payment to the universe, so that perhaps the cigarette you’ll have on the walk home won’t be the one to give you cancer.’

This bargain with cosmic forces is echoed in other stories such ‘Rites of Passage’ which introduces a couple on a date which appears to be going well until the girl ends up in a physically precarious situation. The cosmic force in this tale takes the form of superstition. The guy jokingly speculates about a fabricated superstition involving the Cornish beach on which they find themselves. Regardless of the fact that this superstition was innovated on the spot by her date, she chooses to believe in the potential threat presented to her by this scenario and refuses to move from her awkward and uncomfortable position on the beach, saying that, ‘As long as I stay here. I’ll be just fine.’ This story employs the absurd to great effect in order to explore ideas of rules and safety, of obedience and avoiding harm. It is both comic and intelligent because it subtly presents the idea of how we impose rules upon ourselves in order to feel safe.

Banks’ versatility is highlighted in her stories that are narrated in the first person, particularly in ‘Momentum and Harmless’, which has such an immediate voice that is reads like a dramatic monologue told by a college student navigating unwanted male attention. When she talks about the fine line this character walks when met with unsolicited attention and demands to ‘smile’. Engaging brings on more unwanted attention whereas ignoring these leaves her open to aggression ‘…where’s the harm, you stuck up bitch?’ This theme of rules and safety is echoed in many stories, and the risk of harm often comes in the form of male aggression or violence, from the verbal abuse in that retort, to consensual violence, or supressed violence in the story ‘With Compliments’, ‘…and she will say something to annoy him…This time he will let it go, sit on his hands til they tingle and die.’

Violence, control, and obeying the rules come together all the more viscerally in the aptly titled ‘The Higgins Method’. The title relates to a method of dog training that encourages dogs to exercise free will, provoking thoughts about the external forces and voices that we allow to influence us. This is a tale about a celebrity coping with leaving an abusive with a focus on speech, and voice. We learn that she is a singer and that her partner ‘trains’ her speech, ‘…he’d remained silent that time he’d held my hand over the kettle to teach me about glottal stops. BuT-ter. BuT-ter.’

Exercises in Control succeeds in juxtaposing the ordinary with the extraordinary, the mundane with the shocking and at times, absurd. Many of the stories present characters in everyday scenarios; at the supermarket, at work, on the commute to work, yet each managed to catch me off guard and surprise me in the direction which the tales took. The result was both entertaining and thought-provoking. Banks’ stories scratch beneath the surface of the ordinary to reveal the dark messiness that we both turn away from and are familiar with.

Since completely a Masters in Creative Writing at Glasgow University, Yasmina’s short fiction has been published online and in print in anthologies and literary journals, most recently in 24 Stories (an anthology in aid of the Grenfell Tower survivors), Litro Magazine and Gordon Square Review. Her creative non-fiction is published in Shooter Literary Magazine and her poetry is on By&By Literary Journal. She lives in London where she teaches English and takes care of her family.