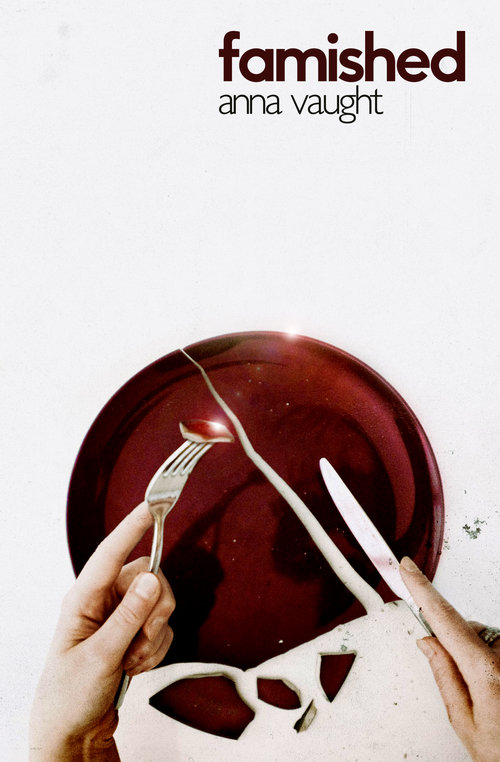 Anna Vaught’s collection Famished is billed as ‘eighteen stories to whet your appetite and ruin your dinner.’ These works of flash fiction or very short stories are pieces of weird fiction or horror on the theme of food. Some of the terrors portrayed are realistic: wicked grandmothers lock children in pantries full of ominous pickles, or force-feed them revolting dishes of tripe. Some of the stories are more fantastical: there are vampires and cannibals of various types, a nightmarishly everlasting feast, ghosts, and seaside rock that spells out sinister questions like, ‘Which bad thing did you always want to do?’.

I preferred the more realistic stories where nightmares arise in everyday British settings. ‘What He Choked On’ is a Shirley Jackson-esque tale where a boy, riddled with anxiety, is taken to a ‘Thai tapas’ restaurant where he worries that the food will be an alarming combination of Spanish cheese that ‘tasted of saddle and the hair of beasts in heat,’ and fish sauce. The story beautifully captures the downward spiral of anxiety, the awful knowledge that you are being judged and found wanting, the desperation to please, the terrible fear of doing the wrong thing which actually makes you do the wrong thing.

I enjoyed the dark humour in some of the stories. In ‘Sherbet,’ a sherbet dib-dab creates such an outpouring of ecstasy and preaching that a religious cult is born. In ‘The Choracle,’ children at a birthday party dip Wotsits and cheese and onion crisps into a chocolate fountain, so that sediment erupts, ‘like crude with grit in it,’ and shapes appear, foretelling the future. It contains some interesting reflections on social class amongst school-gate mums, who are divided into the smashed avocado set and the pickled egg set.

Amongst the darkness there are glimmers of hope and pleasure. ‘A Tale of Tripe’ features some truly stomach-churning tripe, ‘in its nasty pool of white sauce, encircled by effulgent lumps of onion,’ the flour never properly cooked off so that ‘it lurked congealed in tiny mounds – but you didn’t see it in the unmapped viscosity of the sauce.’ But redemption comes when the ghost of Elizabeth David pops out of a book and gives a cookery lesson. She even teaches the correct way to prepare tripe, ‘grilled to a sizzling crispness,’ and served with tartare sauce. In ‘Shame,’ a husband disapproves of his wife’s slovenly eating habits, but eventually she finds happiness with a man who’s ready to share her sofa in matching tiger-print onesies, dipping twiglets into a jar of mayonnaise. Pleasure doesn’t have to be haute cuisine.

Many of the stories in Famished have recurrent themes: the eaters and the eaten, class anxiety, childhood fears around food. Others are more experimental, feeding off (forgive the pun) literary tales such as Sweeney Todd and The Great Gatsby. The influence of Angela Carter looms large, in the mixture of the sacred and the profane, as well as a fondness for unusual adjectives and lavish descriptions. But whether you prefer the dregs of a packet of Doritos, a lavish banquet, or human blood drunk from tiny cups, Famished serves up a rich and highly seasoned smorgasbord of foodie treats and terrors, with something to suit every palate.

Kate Tyte was born in Bath, England. She worked as an archivist for over ten years, before moving to Lisbon where she works as an English teacher. Her non-fiction has appeared in various British history and genealogy magazines. Her essays have appeared in Slightly Foxed, and her fiction in STORGY, Riggwelter, The Fiction Pool, and in Madness Heart Press’s anthology ‘Ghastly Gastronomy’. She is a book reviewer for STORGY and The Short Story.
Type to search or hit ESC to close