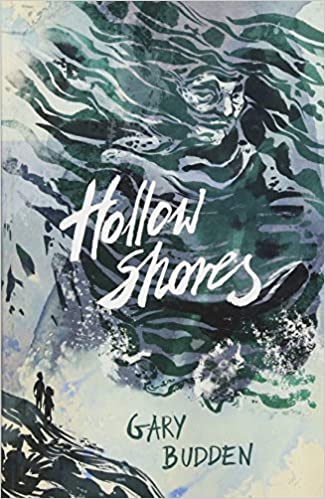 Landscape, landscape, landscape. Real, imagined, psychological. In Hollow Shores, a real place on the Kent coast, Gary Budden takes us through a journey of his youth, where punk and the power of music shaped his life, funnelled through and fanned by his love of nature, of folklore, the seascape and of birds in particular. It is a story of resisting middle age, of asking that age-old question, When did I stop being young?

There are a plethora of characters in this book, all somehow linked, whether by being friends, relations, or people just passing in the street, each story dipping in and out of the others’. Each story is a beautiful vignette, each chapter a short story in its own right, and in each Budden’s language is as rich and as lush as the landscapes he describes. Some stories are strange, surreal even, but it’s not as crazy as it sounds – these people are authentic, and the landscape be it London or the coast, expertly observed. Budden’s writing is heavy with gentle melancholy, ripe with atmosphere, and truthful to the last. Imagery is everything in this book and it is succulently lush with it. As Budden eschews the modern age, the onward march of progress, lamenting that things ain’t what they used to be, he paints a picture of a time when the land and people were ruled by myth and legend, of a time when we went hand in hand with the sunrise and sunset and explained away what couldn’t be understood as being the work of giants, witches, spirits and magic.

Budden takes us from the wet, salt-permeated tides of Hollow Shore, to the capitalist streets of London, to the isolated beauty of Finland, on trains, along canals, through city streets and musty, fusty pubs that no longer stand, his nostalgia packed tightly in a rucksack and jostling for space next to old ornithology books and binoculars. Where has the young, pissed-up, doped-up festival-goer gone by the time he’s reached 30? Where indeed. It seems he is picking over his life so far, looking for something he lost in his teens, unaware then, that he was even in possession of it.

Also slipping casually through these pages, these stories of other lives, are myth and folklore – those esoteric stories every culture is built upon. Budden nonchalantly places them before the unwary – the name of the canal boat Reynardine, for example – clever for those who know, curious for those who don’t.

People fall in and out of love, into and out of appropriate and inappropriate relationships all the way through Hollow Shores, and whether or not it’s all autobiographical is ambiguous, but Budden’s love of myth, legend, the natural landscape and the part we play in it is not. Nothing ever ends, he states, only changes.

Throughout, Budden’s language is lyrical, honest, and all the places and people he describes come easily and vibrantly to life, without it seems, him even trying. The grind of city living, the ceaseless, relentless tedium so often felt by those of us mourning our youth and terrified of what’s coming is palpable:

‘John and Lucy live together…. but these few weeks, bar brief bouts of warm embrace in the mornings … they haven’t really seen each other.  They haven’t shared what lifestyle magazines call quality time. Life reduces itself. …. same routes every day … to and from office spaces where somehow the hours pass but little seems to change moment to moment. This is work, this is life and this is what grownups do.’

Jacci Gooding is busy on the live lit circuit in Leamington Spa and Warwick. Author and ex-editorial assistant, she can also be found in the summer months reading her short stories at The Hawkesbury Upton Literary Festival and on the fringe at the Evesham Festival of Words. A Writers’ New competition winner and participant in Birmingham Rep’s Play in a Day.  Self-published in both digital and paper format, her short stories can be found online as well as on her blog. When not writing fiction, she writes short articles for Mayhem! magazine.