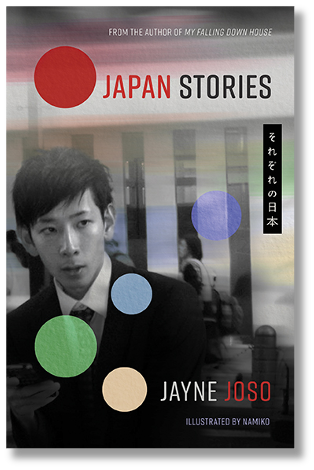 At the age of twelve, Jayne Joso read Angela Carter’s Japan-set story collection Fireworks, and decided she wanted to live in Japan one day. She finally fulfilled that dream by moving to Japan to teach English. Since then she has published four novels, including one, My Falling Down House, set in Japan.

Japan Stories contains fifteen very short stories, ranging from flash fiction to more substantial tales, and five ‘miniatures:’ micro-stories in the manner of Lydia Davies. The book also features several manga-style illustrations by Japanese artist Namiko, which have a cute, childlike quality, appropriate for some of the stories, but unsettlingly incongruous for others.

Japan Stories explores loneliness and isolation, which may be partly a reflection of some of the stories being written during the pandemic. There’s Mr Yonemama, a father who sleeps alone, longing to join his wife and children on their shared family futon in the next room; Mrs Murata, who decides to people her depopulated town with knitted figures; and Kenji, who fills the empty rooms of his enormous, isolated home with the obsessive fruits of internet shopping. Many of the characters struggle with mental health difficulties, for example a son struggling to care for his father who has Alzheimer’s, and a young man who copes with grief by ‘becoming’ David Bowie.

The theme of homes also runs through these stories, obliquely tackling questions such as: what makes a house a home? What does it mean to be homeless? Can you be in some sense homeless, even if you have a house?  Kaori is a woman who lives abroad, and no home or family can ever satisfy her – she wishes to be single again in a tiny room, and free of the whole burdensome business. In two very contrasting tales, In ‘Hiromichi,’ the narrator brings a foreign rough sleeper to stay in his home. His act of generosity and seeming naivety is repaid with a deep creative bond and a strange but beautiful act of kindness. But in ‘Sachiko and Saeko,’ homelessness becomes preferable to living with a controlling and bizarre landlord. With all the staying at home we’ve done because of the pandemic, the meaning of home seems like a timely thing to ponder.

The style of Joso’s stories is dreamy and detached, concentrating on the inner landscape more than the outer world. Some of the stories have surreal elements, or a fabular quality, reminiscent of some of Angela Carter’s work but without the baroque stylings, like the ghost story ‘Misaki.’

Sometimes it seems as though every foreigner who’s ever set foot in the land of rising sun has written a quirky memoir about the experience, but very few venture to write in the first person, in the voice of a Japanese person. Debates about cultural appropriation can rise to the hysterical pitch of a witch hunt, but they do raise important questions, namely, why read stories by a white British woman who is merely pretending to be Japanese, when there’s no shortage of excellent translations of excellent Japanese literature in English? Joso is evidently writing in entirely good faith. She notes that her work was read over by a Japanese professor before publication, and she has received grants and awards from Japanese cultural associations. There’s no reason to suppose she doesn’t understand what she’s doing, but as a reader, I still can’t help but have doubts as the authenticity of these supposedly Japanese voices. This is one instance in which I really feel that some kind of introduction to this book would have been very helpful, to set in context. I’d like to know, for example, whether Joso’s characters are purely fictional, or based on real people, and whether she thinks the Japanese are, in general, lonely people, or whether she’s simply chosen to portray a lonely few.

By far my favourite story in the collection is ‘Chizuru,’ written from the point of view of an English woman in Japan. Presumably it’s based on Joso’s own experiences as a guest in an eccentric Japanese home. The story is funny, surreal and charming, a traveller’s tale of revealing vulnerability, open-mindedness and healing. I can’t help but wonder if Joso is choosing to wear a Japanese mask in her fiction to avoid presenting her real face to the world. It’s an impulse which seems oddly Japanese.