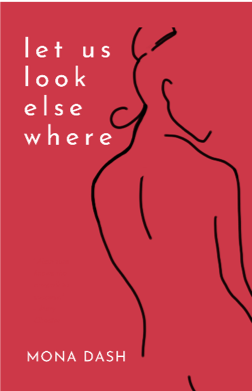 Mona Dash’s short story collection is a fascinating concoction of characters and stories drawn from different corners of the world.

Her memoir A Roll of the Dice: a story of loss, love and genetics won the Eyelands Book Award 2020. Dash has previously published two poetry collections, A Certain Way and Dawn Drops.

Let Us Look Elsewhere is her debut short story collection.

The opening story (which lends the book its title) grabs the reader’s attention immediately. Brimming with confidence, the writer demands the reader trust her with the stories she wants to tell instead of narrating the ones expected of her. The story begins audaciously, and the piece quickly garners admiration as Dash sets out her argument and ultimately wins over the reader.

The first line, ‘I imagine you come here with expectation’ sets the tone, while the subsequent lines slowly build a certain level of assurance. ‘The stories I want to write may be nothing you expect or may be everything you desire.’

And then, ‘Let us then look elsewhere, and somewhere it will all come together.’

And indeed, it does. Dash steps up to the challenge of telling stories on her own terms while striking a chord with the reader.

The story of a fur farmer in ‘The Sense of Skin’ who is forced to give up his trade begins in Finland and ends in India. Erno discovers the privilege of white skin and comes to appreciate the range of Indian skin during his travels: ‘I like their sweating skin, in shades of brown, light, dark, darker, like the earth outside, like the volcanic soil in the hills of Ostrobothnia. My own skin is paper white in comparison, transparent, unlike theirs, deep like the earth.’

And when he finds love, ‘Shining skin smooth seal-like, warm, as if on fire, as if an Aga has been lit behind that skin.’ The images breathe life into the stories as the reader accompanies Erno on his journey of self-discovery.

The concept of belonging and the home are the recurrent themes in ‘Natural Accents,’ ‘Secrets’ and ‘Watching the Aurora.’ ‘Natural Accents’ in particular, highlights how accent marks an immigrant and explores the perennial need to fit in. ‘It’s the only way I can truly belong. It’s not just about the colour of skin the clothes, or the food. They are obsessed with accents in this country, and as long as I speak English with my Indian accent, I am assumed to be a visitor. Always from somewhere else, forever.’

‘Secrets’ reiterates the concept of home and belonging where the prospect of a new house with secrets forces Leela to confront her own. ‘This house is speaking to you. The small study, the irregular bedrooms, a balcony running across it, you can see yourself here, hiding in its depths, spending mornings looking for secrets, stepping over the uneven pedestal into the kitchen.’

In ‘Watching the Aurora’ the persistent need for belonging comes to the fore, draped as a casual affair turning sinister towards the end. ‘Above me I would see the Aurora flash, and there I would see home. No longer the other, no longer on the outside, I would be one.’

The outsider theme is again explored in ‘Why Does the Cricket Sing’ as schoolgirl Rose is singled out for punishment in class, against the background noise of crickets, a sound that haunts her into adulthood. ‘That whisper would lie low in Rose’s blood for years, and like a hooded cobra rise to deride her.’

There is a strong sexual undercurrent in the stories, and yet they are tinged with sadness. The woman in ‘Lovers in a Room’ moves from man to man hoping for some connection. ‘She will try and complete herself a little more, add a thought, an experience, and hope it will be better than the last time.’

The shock element of ‘That Which is Unreal’ where a woman services men not for money but to fill a void, throws up the inadequacy of the digital world. ‘Each of the apps bursting green and blue, read and unread messages flitting on her phone, like fireflies, glimmering bits of hope.’

The same theme then takes on materialistic hues in ‘Inside the City’ that begins with: ‘Here in Vegas, I feel like myself, glittering, shiny, beautiful, the way I am meant to be,’ and ends with: ‘Here in this shining city I see myself, shivering, lonely but true.’

The repetitive lines create impact as they fuse the protagonist and the city into one, draped in shallow comforts, craving an elusive, genuine love.

It is easy to note the origins for ‘Golems of Prague’ in Dash’s career as a tech professional. Dash skilfully contrasts the looming threat of AI to Ivana’s work life, even as the Indian tech team elbow their way into her personal space. ‘This is Ivana’s café. Her home! Her world they are pushing her away from. Her life they are treading on.’

Dash dives into her origins as she narrates the story of the ‘Boatboy’ Baji, a forgotten martyr from Odisha. A historical gem among the contemporary stories of the collection, the tragic tale of a brave young boatman unfolds against the backdrop of the British era and the exploitation of the poor by the rich.

‘Temple Cleaner’ and ‘Formations’ represent the immigrant experience and yet steer away from the conventional. In ‘Temple Cleaner,’ Nathu’s kal kisne dekha (who knows what will happen tomorrow) attitude reflects the immigrant survival instinct with all its repercussions: ‘”Kal kisne dekha?” I won’t be a refugee in another country. I am wealthy, I will stay here. Apna khoon, my own blood living in my own home.’ Whereas in ‘Formations’ a mother tries to save her daughter’s rocky marriage with food and rituals, but her daughter has other plans. ‘She has never liked upma, though her mother makes it well… She spoons some into her mouth wanting to knock on the blue door instead, share a flaky croissant from Mabel’s…’

Let Us Look Elsewhere is an impressive collection not only for its thought-provoking stories but also as a revelation of the writer’s identity and beliefs. They can be enjoyed as well-crafted tales or as an enjoyable insight into a writer who has deftly weaved herself into her stories.

Asha Krishna started her writing career as a journalist in India, now she writes short stories and flash. She is a proud mentee of the Middleway Mentoring Project, a professional scheme for early stage writers. Her work has been published in print and online. She lives in Leicestershire and tweets as @ashkkrish.