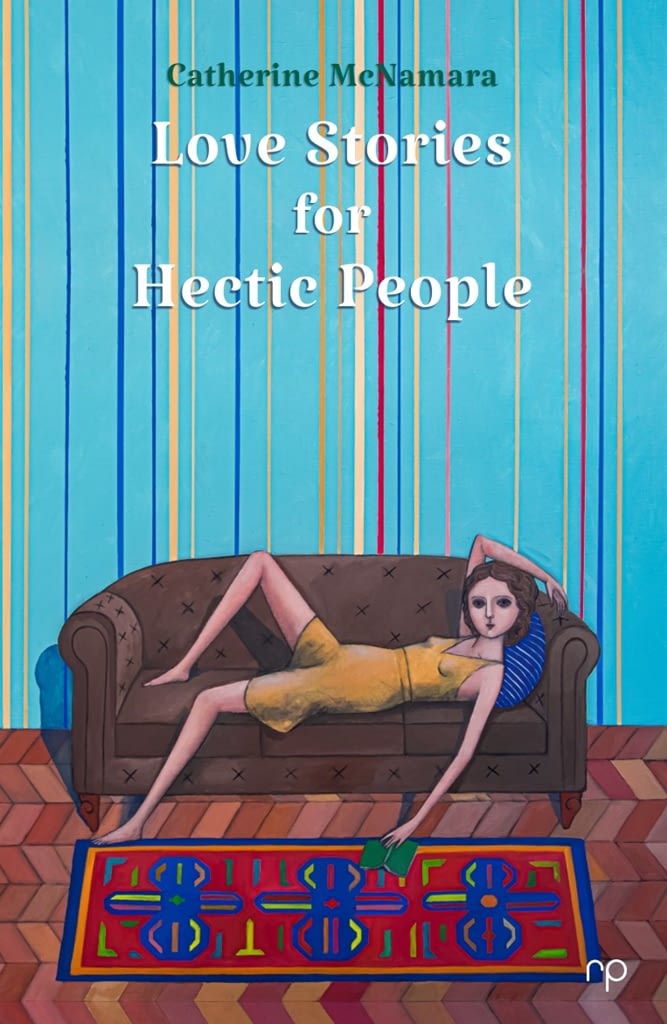 The opening paragraph of the opening story, ‘As Simple As Water,’ sets the tone of the entire collection:

Vasilis K and Marj B are embracing at an Athens train station (it is Ambelokipi) when Vasilis feels Marj’s legs fold under her and sees her eyes roll back, and the woman he has made love to in a hotel room far above and with whom he argued (he knows he was being unjust) falls in a dead faint at his feet as the airport train rolls in on screaming rails.

This post-coital couple, embracing at a train station in Greece, is about to part ways, to return to their other lives and other partners, but the question here (and the question which reverberates throughout) is: which life is real? The day-to-day humdrum, or these brief and intense encounters of body and soul?

Infidelity is a theme that runs throughout the collection, featuring in many of the stories.  A few examples, aside from Vasilis and Marj in the opening story, are the couple at a concert in ‘Foundation Song’; ‘The Mafia Boss Who Shot His Gay Son on a Beach’ who has a long-term lover, Elena; and Tanja and Kurtin in ‘Tokyo Frieze,’ who have been lovers for over ten years, and live ‘on different continents, in different time zones and contrasting seasons.’

Place is also of great importance in Love Stories for Hectic People. Many of the rendezvous between lovers are in hotel rooms far from where they live, one or both having travelled to be there. Other stories are set so firmly in a place that the story almost wouldn’t have been possible anywhere else. For example, ‘In God’s House’ is set in Ghana where a Christian couple have a maid. The story is an encounter between Eliot, who sees himself as head of the family, and the feisty maid, Regina. Angry with her for stealing and committing an act against God – conveniently omitting the fact that this discovery was made by invading her privacy – Eliot confronts her and within this exchange makes a discovery about his marriage that he’d rather not face alone.

The strongest stories in the collection, in my opinion, are those of violence and hatred, leaving the reader feeling like they have been punched in the gut. In ‘Citrus’ a young mother contemplates the effect of her husband’s actions on her sons. ‘I’m holding the baby when he strikes me across the cheek. […] My sons each become smaller and tighter in their seats.’ Since ‘oranges have solved the crimes of this house’ she gives each of her boys an orange. This giving of the fruit is an act of comfort: she provides distraction from recent events as well as nurturing and feeding them in case her words ‘[w]e are okay […] [w]e are okay now’ are not enough. As ‘their fair hair clings to their foreheads,’ the boys race to finish their oranges, ‘[e]verything is fury, everything is rivalry’ and the mother reflects, in a last line that is simply superb: ‘When they strike their girlfriends and wives, they will smell the citrus of their childhood.’

McNamara uses a second person point of view in the story ‘Slaughter of Innocents.’ The father, ‘high when he left,’ leaves his wife and daughter wearing only their underwear ‘cos the heat has fucked around with [them] all day.’ Six men, wearing insignias on their shirts and carrying guns, barge through the door and the daughter immediately knows that this situation is of her father’s making. These men smell of aggression, but ‘you know better than to say a word cos they gave Sandro’s sister an anal check when she back-answered in Verona.’ The daughter, upon realising that she and her mother have not only been left physically, but left vulnerable – abandoned by the very person who should be protecting them – concludes that she hates her father more than she loves her life and when he eventually returns, her mother ‘is still crying in bursts.’

Repetition works beautifully in ‘A Forty-Nine-Year-Old Woman Sends Messages to Her Thirty-Two-Year-Old Lover.’ Each sentence of the one-paragraph story starts with ‘I wait’ apart from the last which starts with ‘I walk,’ signaling movement of the character. This is also a good example of how McNamara makes the titles work hard, something especially important in shorter pieces.

The stories in Love Stories for Hectic People are not cute or sentimental. They are raw and messy, sometimes literally (i.e. in ‘Genitalia’), and don’t shy away from exploring the darker aspects of love. Be prepared to be shocked and stunned, but also impressed and enthralled by the lives bound together, for better or worse, in these stories.

Laura Besley is the author of micro fiction collection, 100neHundred (Arachne Press, 2021), and flash fiction collection, The Almost Mothers (Dahlia Books, 2020). She has been listed by TSS Publishing as one of the top 50 British and Irish Flash Fiction writers. Her work has been nominated for Best Micro Fiction and her story, To Cut a Long Story Short, will appear in the Best Small Fiction anthology in 2021. Having lived in the Netherlands, Germany and Hong Kong, she now lives in land-locked central England and misses the sea. She tweets @laurabesley