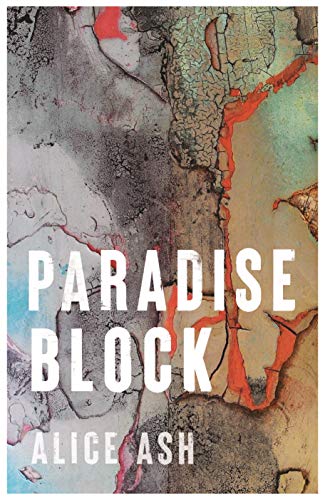 Alice Ash’s ironically named Paradise Block is a dilapidated tower block where mould grows ‘thick as fur’ along the walls, and the inhabitants’ paths cross and intertwine, without ever quite managing to converge into a community. The bleak vistas and odd neighbours create a setting that will be familiar to all urban dwellers, but Ash takes claustrophobic urban isolation to feverish, surreal heights.

The inhabitants of Paradise Block are outsiders, eking out an existence on the margins of mainstream society. Poverty, alcoholism, mental illness, loneliness, and crime are all recurrent themes, but there isn’t any heavy, issue-based handwringing here. Ash is not Ken Loach: the characters aren’t problems to be solved, or a sociological survey, but personalities to be explored. Ash is interested in the interior lives of people living on the edge, people who struggle to get along, making bad choices and wrong decisions. Many of the stories are written in the first person, and all the narrators are unreliable. The stories offer a window into lives either sustained or destroyed by escapism, dreams and delusions. Many of the characters recur in different stories, from different points of view, but there is never quite enough information to piece together a coherent story of their lives, and for this collection to become a novel. The characters fall through unsettling cracks in the narrative, and plenty of mysteries remain unresolved. Coupled with the surreal setting, which blends grimy and magical realism, Paradise Block becomes a purposefully disorienting read. Identities are unstable: they morph and change from one story to the next, from one point of view to another. This is life as viewed through the ever-shifting distortion of fun house mirrors.

The dream factory of consumerism is a strong current in the stories. Many of the characters work in the Clutter department store, and still others long for the gentrified department store of Plum Regis. The store is a focal point for all desires and hungers, an avatar for the glamour, success, social status and happiness that the characters don’t really possess. But as soon as they get close to the store, the dreams fade to nothing, or twist into nightmares. The ‘better’ store in Plum Regis is in fact exactly the same, just with a different colour scheme. This season’s unique dresses turn out to be the same every year. The goods are displayed in bizarre departments  like ‘foot odour’,  ‘biscuits’, and ‘bookmarks’, that underline the ordinariness or uselessness of the products. In ‘Bad Elastic’, middle-class Marie, slumming it in Paradise Block with her girlfriend Shell, spends the couple’s meagre life savings on a prom dress so small she can’t even do it up, simply to escape from overbearing salesgirls. In ‘Complaint’, a satirical nightmare of Brazil-like bureaucracy, the zero-hours contract salesgirls are trapped by sexual harassment and the power plays and one-upmanship of the male bosses. The store is usually empty, the work tedious and precarious, the consumer dream turns to ashes. And yet: many of the characters find their greatest moments of happiness in the department store café. The odd consumer goods which appear throughout the collection – White Fingers biscuits, honey wine and black bread – give a fairy-tale quality to the stories, a kind of beautiful poetry which acknowledges that mass-produced, shop-bought products might not sate desire, but they do sprinkle magic into the bleakest of lives.

Some of the book’s loveliest human encounters are brought about through purchases. In ‘Timespeak’, the elderly and delightfully named Mr Cornflower is so lonely he forges a friendship with a woman who cold-calls to sell him luxury coffins, and with the man who delivers his groceries. As the shopkeeper is put out of business by the department store, and Mr Cornflower grows increasingly deaf, the two men forge a cantankerous relationship by writing little notes to each other. In ‘Planes’, my favourite story in the collection – which perfectly captures the weird dynamics of school, of kids finding their place in shifting social hierarchies –  Ben writes to his absent father. His misaddressed letters find their way to a waiter in a Malaysian restaurant, who becomes a new kind of father figure, far better than the one he has. In ‘Sea God’, elderly, neglected hoarder Min hides her old purchases on the beach, to be found by young man who patrols with a metal detector. The tender, humorous, prickly, relationships that develop between some of these misfits are all the more beautiful for their ambiguity, their not-quite friendship status.

A couple of the stories verge into dark, edgy, almost-gothic horror territory. A mysterious and malevolent young woman named Pinkie, who has deep, dark holes for eyes, and long misshapen fingers, eases through the cracks in the stories. Sometimes we catch brief, shadowy glimpses of her. She is almost an urban legend of the block. At other moment, she mesmerises people, licking food off her palms in the department store café, or stealing another girl’s job. Is Pinkie real, or does she exist in some liminal space?  It’s ambiguous, but ‘Black, Dark Hill’, is told from Pinkie’s point of view as she struggles with the same problem that the other women characters have: trying to be seen and acknowledged by a man. In ‘Fleatrap’, a couple become so obsessed by squashing fleas with a pencil that they first neglect their own baby, then entice other children into the house. Are they malevolent paedophiles, or just impish, child-like creatures? It’s another deeply ambiguous and unsettling story.

Paradise Block is a wonderful debut collection, in which Ash captures a kaleidoscope of characters, trapped in a strange and limited world and desperate to escape. It’s a book that perfectly displays the weirdness of everyday life, but that taps into the magic, beauty, and compassion that exists, even in the darkest places.