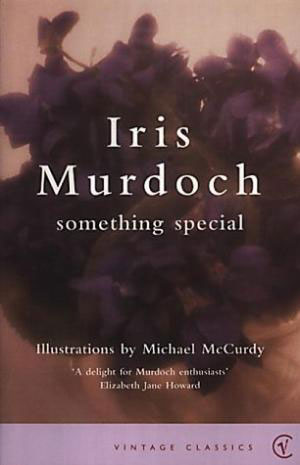 This month marks 100 years since Iris Murdoch’s birth. Born in Dublin on 15th July, 1919, Murdoch was a literary and intellectual luminary. She studied philosophy at both Oxford and Cambridge universities and later taught at Oxford. Alongside her academic work, she wrote a smattering of poetry and plays and is perhaps best known for her 26 novels, one of which won the Booker Prize in 1978.

I’ll admit that for a long time, I was intimidated by Murdoch’s dazzling intellectual pedigree and had an impression that her fiction would be difficult, overintellectual or cold. But several years ago, when I did finally delve into her novels, I found to my delight that they are actually full of unrequited love, profound spiritual crises, extra-marital affairs, brushes with mortality and shocking accidental deaths; and that they are invariably peopled by unlikely ensembles of friends which include Oxbridge academics, civil servants, and quirky art students in wacky clothing. Her novels are not cold at all, but rather an addictive mix of mortal drama and eccentric charm, where the action seems to have been plotted by Shakespeare and the colourful cast wouldn’t look out of place in a Richard Curtis film.

Murdoch is not known as a short-fiction writer. In fact, she only ever published one short story, ‘Something Special.’ (And this was, in fact, my own first foray into her fiction.) The story originally appeared in a 1957 anthology, but it gathered renewed interest after she died in 1999. It was then published as a stand-alone edition on both sides of the Atlantic (the US version also features evocative woodcut illustrations by Michael McCurdy). It’s a touching story that lovers of short fiction are likely to appreciate. But even avowed Murdoch fans might be unaware of this tiny gem.

The story, set in 1950s Dublin, centres on Yvonne, who at 24 lives with her mother and uncle above the family’s shop. Yvonne is being courted by plodding and ‘portly’ Sam, who could ‘hardly count as handsome.’ Yvonne has no interest in Sam, but his proposal seems imminent, and surely, her uncle and mother suggest, at her age she should take what’s on offer:

Close outside the shop the tram for Dublin came rattling by, darkening the scene for a moment and making little objects on the higher shelves jump and tinkle. It was a hot evening and the doors stood wide open to the dust of the street.

‘Nothing special is it?’ said her uncle. ‘He’s a nice young man in a steady job and he wants to wed you and you no longer so young. Or would you be living all your life on your ma?’

Yvonne yearns for something more than the dreary options she sees laid out for her. And it’s not only Sam who’s ‘nothing special’; although it’s summertime, a wholesale Christmas-card seller arrives at the shop that evening too. Yvonne is immediately drawn to a fancy, embroidered card amongst the drab manger scenes. But even these small pleasures remain out of reach – Yvonne’s mother has no time for such extravagances and chooses instead the cheaper, more ordinary cards which are guaranteed to sell.

When Sam arrives, Yvonne grudgingly agrees to go out into town with him. They walk Dublin’s streets, the city growing hot and fetid, and watch the mailboat sail for England. Near O’Connell bridge, where ‘the Liffey flowed past them, oily and glistening, as black as Guinness, bound for Dublin bay’ they step into a pub where they sit in the newly redecorated ’saloon lounge’ – a twee, tame area of the pub deemed acceptable for ladies. Against this stultifying backdrop, Yvonne evaluates Sam:

… she concentrated the glow of her imagination on him; but could only notice that he leaned forward in an apologetic way to the barman, and how absurdly his small feet turned out as he stood there. He gave the order in a low voice, as if he were asking for something not quite nice at the chemist’s.

Baulking against the dullness of Sam and the lounge, Yvonne persuades Sam to move to the downstairs bar (although if there are ladies downstairs, Sam comments, they’re ‘not nice ones.’) It doesn’t end well – they become embroiled in a drunken altercation and end up walking the dark Dublin streets again. But as they reach St Stephen’s Green, Sam tells Yvonne he has something special to share with her. Although the park is closed for the night, they slip between a gap in the railings and Sam reveals a strange and beautiful thing: a fallen tree lying next to the black, moonlit lake.

To Sam, the sight is haunting and stirring. He begins, haltingly and hopefully, to share his fragile epiphany with Yvonne. But Yvonne is unmoved. Has she walked so far, she asks, torn her stockings, and scrambled through the damp bushes just for this?

‘But no,’ said Sam, quite calmly, now beside her, ‘only see it, Yvonne, be quiet for a minute and see it. It’s so beautiful, though indeed it’s a sad thing for a tree to lie like this, all fresh with its green leaves on the ground, like a flower that’s been picked. I know it’s a sad thing. But come to me now and we’ll be a pair of birds up in the branches.’ He took her against her will and drew her to him among the rustling leaves which lay in a tall fan across the path.

He kissed the girl very gently on the cheek.

The scene reaches a disturbing climax, as both the tree and Sam’s persistent affections become monstrous to Yvonne. She is repulsed and horrified:

‘I hate it,’ said Yvonne, and began to run away from him across the grass, blubbering as she ran. She was before him at the hole in the railings, and he had to run after her as she hurried along the pavement, trailing a sort of bramble behind her from her skirt.

Abandoning Sam to find his own tram, Yvonne rushes home. Where, climbing into the sagging, brass-framed bed she shares with her mother, she has to confront her own dark night of the soul and finally reckon with the reality of what her life can and will be.

There are themes in ‘Something Special’ that are common to Murdoch’s novels. There are vivid, imperfect characters who clash with one another and push at the confines of their lives, and there’s the tragedy of unrequited love (although in this case Sam’s affections are not only unreciprocated, but actually repellent to Yvonne). Perhaps most striking, though, is Murdoch’s close attention to those moments where people reach for, or touch, the mystical and otherworldly. As in the encounter with the fallen tree, such Murdochian moments are tinged with darkness; there’s a suggestion that we can’t experience this sort of transcendence unless we are also prepared to confront the shadow side of the otherworldly – something sinister and potentially perilous.

Although there are points of contact with Murdoch’s longer fiction, there’s something different and especially beautiful about this little story. Unlike her novels, there’s no vast cast of characters with their intersecting lives; just the dramatic dyad of Yvonne and Sam. And while the novels hurtle towards their fateful conclusions – denouements filled with showdowns, drama and deaths – this story steps delicately into a single night in the characters’ lives, where comparatively little seems to happen. Here, as in the best short fiction, the action here turns on a smaller, decisive moment and offers only a glimpse into what came before and what might come afterwards. It uses the glancing light of a short story to tell a tale that’s more melancholy and subtle than the stuff of novels. In Sam’s words, ‘indeed it’s a sad thing,’ but it’s certainly something special.