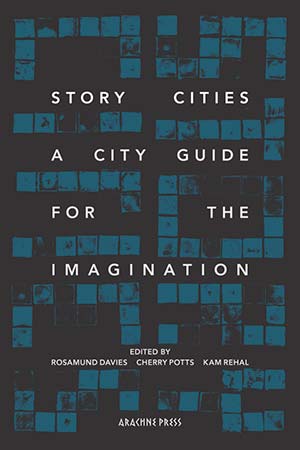 It’s an intriguing premise: fifty very short stories about cities, but with no proper nouns identifying those cities or their landmarks. Even the characters moving through these cities are nameless.

In these stories (which are all under 500 words) there are hints as to where the action takes place: tiled underground stations; red paper New Year lanterns; outdoor cafes in balmy, shade-dappled squares. I had anticipated that I would be busily foraging for such clues to pin down the location of each story, but as I read this anthology, I realised that that I was much more interested in the way these stories evoked the rhythms and encounters common to urban life everywhere. And this, of course, is the intention of Story Cities: A City Guide for the Imagination –  as the editors write in the introduction, ‘these are stories about any city, every city in which you might find yourself.’

The stories here – by almost 50 different authors – are frequently poetic and insightful. For instance, Jasmine Kirkbride’s ‘Not Every Train’ is eloquent about the editors’ suggestion that ‘any city’ can become ‘every city’:

Although the route I take is the same each day, the trains themselves vary. Yet the extruded plastic seats and psychedelic fabric designs are repeated with such uncanny similarity, that it is as if all trains are connected by a thread of time and space, so that when I lean against a glass partition for support, I am leaning against all glass partitions on every train…

Like Kirkbride, many authors take public transport as their setting. After all, this is where we are most likely to meet the countless other inhabitants of any city. And these are strange and intriguing relationships – on buses and trains we find ourselves up close and personal with people we do not know at all. For example, Alexandra Penland tenderly explores the intimacy that can develop between regular commuters. In her story, ‘Second Car From the Front,’ we meet a small group of train-riders who become familiar with each other’s daily habits and clothing, but who never really interact. When an older man in the group – who appears to be a museum docent and wears colourful bow ties – disappears one day, the others silently mourn his absence: ‘There was no way to learn why things had changed. They did not know each other. Perhaps he had moved. Retired for good. Died.’ In another commuter story, ‘Other Signals,’ Annabel Banks observes the subtle communications that flow between bus passengers, even when nothing is said aloud. Her writing is perceptive and lyrical:

Three off. One on: an old lady with a kerfuffle of bags. Bright red hat, woollen skirt, wet-faced and gasping. She approaches my kingdom of one-on-a-seat and makes the signals of intent, the uncaught eye-flick and half-turn to reverse into position. I shuffle my legs, move my shoulders a little, bumping against the trembling wall.

There is no more room, but this is a gesture of invitation, a promise to share properly. Love me. I am safe.

If cities are marked by a kind of intimacy with strangers, I was struck too, by several pieces that upturned this idea: sometimes our closest relationships can take on a new shape in the city. For instance, in Laura Besley’s ‘Slim Odds,’ the narrator catches sight of her estranged sister on a subway train – they haven’t spoken in years and the familiar face is startling amongst the sea of strangers’ faces. Meanwhile, the narrator of Shamini Sriskandarajah’s ‘Coffee’ takes a train journey with their mother and brings along a homemade cake. In a tiny but shattering act of rejection, the mother stubbornly ‘won’t touch the cake that took me two hours,’ and instead nurses a cup of coffee ‘that a stranger made in a few minutes.’ Both stories cleverly bring home how devastating it can be if the people supposedly closest to us prefer the company of a cityful of strangers.

Interestingly, several of the stories involve ghosts. Perhaps it’s apt: cities are full of other lives which can seem not quite real and which we only half-see. There are literal ghosts in Patty Tomsky’s chilling ‘In Between, Sunny Day’ – shades who wander about invisibly in broad daylight, screaming at people who feel their presence only as an inexplicable shiver. In stories by Maja Bodenstein and Evleen Towey, there are wraiths – apparent past and future selves glimpsed in passing on public transport. And Cherry Potts’ ‘Foundation Myth’ pays homage to those who passed through the city long before it was a city, conjuring the moment someone might have first called this place ‘home’:

You can imagine her putting down her walking staff and gathering her family, her clan, her tribe, and saying here is our place. No need to wander further, here is beauty, here is everything we need, here is defensible.

In this endless flow of people, not everyone finds a place to call home, of course. Cathy Lennon’s story of an immigrant street cleaner noting the homeless people sleeping in doorways is one of several poignant pieces which nod to the many people who become the ‘flotsam and jetsam’ washed up at the edges of the city.

More literally, the physical remnants and traces left behind by other people inspire some moments of delightful poetry: there’s the arresting description of a ‘pavement greased with slid kebabs and a flower of sick’ (Nicholas McGaughey’s ‘Dawn of the City’). And I loved Jess Kilby’s ‘Passage,’ a hymn to an alleyway of abandoned, happenstance objects:

A Coke can crushed into the shape of a heart. A rose petal floating on an iridescent puddle. A cigarette lighter that still has some spark. If you are looking-but-not-looking you might find other things as well – a discarded lotto ticket, the glossy feather of an unfamiliar bird. Look up: ballet shoes dangling from the power lines.

For Kilby, there’s magic to be found in looking at these things, in ‘really seeing’ them. Steven Wingate comes to a similar conclusion in his incantatory ‘You Stand in the Secret Place’ where he tells the reader to attend to these ’mundane things your eye makes miraculous’ and perhaps ‘the city will be yours and you will be the city’s.’ Both stories are deliciously evocative: we might find enchantment in what seems quite ordinary, they suggest, and there are epiphanies for those willing to surrender themselves to the city.

While the best stories in this book are finely-wrought and thought-provoking, not every piece resonated with me to the same degree. But very short stories are hard to pull off, and it’s probably inevitable in such a diverse collection that some pieces will appeal to a reader more than others. However, I think the real achievement here is the overall effect; it isn’t always the case that flash fiction anthologies (with fifty or so different authors) come together to create a coherent whole, but Story Cities really plays to the strength of this format. What emerges from this collection of stories is a sense of the infinite variety of the city – fleeting, contradictory, transcendent, prosaic, intimate, familiar, surprising – full of people we’ll never really know, whose lives briefly touch our own.

And after reading this book, I moved differently through my own city – stopping to look and listen in new ways, and noticing things I might have overlooked. Story Cities certainly lives up to its promise as a ‘guide for the imagination.’