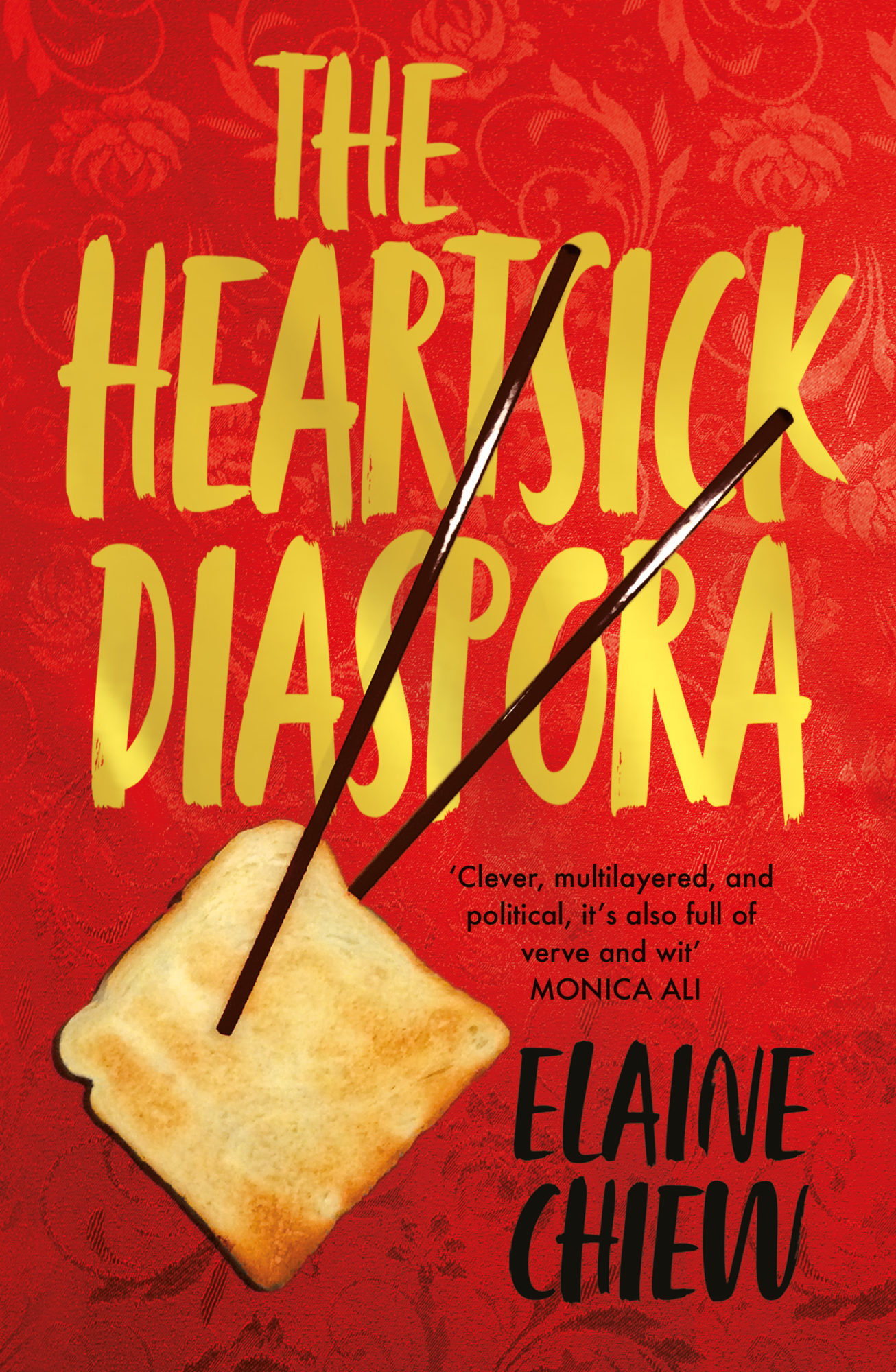 The Heartsick Diaspora, published by Myriad in January 2020 is my ‘best read’ of the year, possibly my ‘best read’ of several years. This is a stunningly good first collection of short stories by Elaine Chiew that includes two stories that have won first and second prizes in the Bridport competition.

A short story collection that has been years in the making can reflect a profundity of thought, an acuity of observation and a breadth of life experience on the part of the writer that is lacking from many novels. And that’s certainly the case here.

If you’re not familiar with the geo-political history of South East Asia – I wasn’t – at least read the Wikipedia entry on Singapore to orientate yourself before you start. The book opens with a poignant and understated story alluding obliquely to the misfortune of the ‘comfort women’ forced into sex slavery by the Japanese during their occupation of Singapore between 1942 and 1945. It closes with an account of the lives of the Samsui women, migrants from mainland China who worked in the construction industry in Singapore between the 1920s and the 1940s, and who through their labour, helped to turn it into the cutting edge city it is today.

In between these two are stories set in London and New York, cities that are home to the Singaporean and Malaysian Chinese diasporas. Chiew’s terrain is the intersectionality of migrancy and ethnicity and, in this respect, she has every angle covered.

‘The Coffin Maker’ is about power, about how things work when you’re a member of an ethnic minority community at the mercy of an incoming oppressor. A woman is obliged to leave home; the same woman returns home. Who can tell what awful torment she has endured in the meantime. Only through signs and coded actions of the characters can we begin to imagine.

‘Rap of the Tiger Mother’ is about the desire to fit in. An anxious Asian incomer to London competes with other yummy mummies, all desperate for their child to excel educationally and in their artistic and sporting accomplishments. The protagonist expresses her tension through the medium of rap. In the end, she must decide between ambition and her child’s well-being.

‘The Run of the Molars’ and ‘Face’ explore how, through the passage of time and physical separation, the older generation and their migrant children become emotionally, culturally and linguistically estranged from one another. In both these stories, things fall apart when a parent from the ‘old country’ arrives in London to visit her offspring. In ‘The Run of the Molars’ a Singaporean Chinese mother visits her three daughters following the death of her husband. She is determined to find fault with everything and fails to appreciate anything about her daughters’ new environment. In ‘Face’, a Chinese Malaysian mother tries, and fails, to bridge the cultural chasm between herself and her snippy, American-born Chinese daughter-in-law and her son. In both cases, the parent has a desperate need to be understood. In ‘Run of the Molars’, the mother longs for her daughters to appreciate how a traumatic event from the early years of her marriage has affected her whole life but she can’t express herself without antagonising them. In ‘Face’, the mother is dealing with encroaching health problems, and feels ‘like a suitcase of discarded things’. After a series of undermining episodes, all she wants is to go home. But the altered attitudes and changed lifestyles of the ‘migrant generation’ mean that communication is well-nigh impossible and that the young couple are unable to ‘hear’ her.

These are sad, painful stories which barely have an emotional resolution. In ‘Run of the Molars’ there is some limited rapprochement between the mother and Lily, the daughter who most resembles her, when a lifetime of bitter sniping gives way to a moment of insight and empathy. ‘Face’ eloquently depicts the struggle to get others to listen to you at the point where your mind begins to fracture and when the thing you most desire is the thing you are least able to have.

Language, of course, is an important aspect of communication. Part of the frustration in ‘Run of the Molars’ stems from the fact that Lily, is losing her grasp of her mother tongue. Although she ‘once spoke Hokkien fluently, after all this time the language had receded to the back of her throat, and she found disconnect between what she wanted to say and the accurate Hokkien words for it.’

In ‘Chinese Almanac’ where two migrant generations are part of the same North American household, communication is still an issue. There are important issues to be discussed. The parents’ marriage is falling apart and their offspring (not sure which gender) is trying to declare that s/he’s gay, but it’s not just that different members of the family have different customs and different belief systems, but that father and grown-up child don’t share a common language. ‘This is how we’ve always communicated,’ says the child, ‘in two languages that don’t have a common root,’ and ‘I want to talk to him in our cross-intentioned languages, but I don’t know how.’ Ironically, ‘Never say anything important with words,’ is the motto in the Chinese fortune cookie that concludes the story.

Other stories tackle other aspects of what it means to be an immigrant. ‘Florida Rednecks Love Moo Goo Gai Pan’ is about being female and trying to survive in the environment of a sleazy Florida restaurant surrounded by sexual predators of all ethnic persuasions. ‘Friends of the Kookaburra’tells of the troubled relationship between two women, one Malaysian, one white American, where a friendship between apparent equals turns out to be something else with a dynamic based on race. ‘The Chinese Nanny’ is a razor-sharp account of the painful efforts of a third-generation Malaysian Chinese nanny working in London to appear authentically Chinese while, at the same time, dependably British. This story pulls no punches about how the white British middle classes view others.

‘The Heartsick Diaspora’, the title story about an ethnic minority writers’ group that meets in a café in Notting Hill, provides a structural device that cleverly threads together a number of the stories in the collection. This tale, in the form of a playlet, provides a platform for examining how white British people view people of other ethnic backgrounds: ‘It wasn’t long before we got into what it feels like to be Malaysian or Singaporean in the UK – you’re a subset (Malaysian/Singaporean) of a subset (Chinese) of a subset (Asian) – and on a fair-weather day, the English assume you’re a tourist.’

But ethnic minority people have their own hierarchies too, and this is a point that’s made in ‘Chinese Almanac’: ‘Mrs Poon and Mom were tight buddies, since their Chinese quotient or pedigree was more questionable than [that of their other friends].’ The case is firmly made: everyone is capable of prejudice based on ethnicity and some of us inflict inferiority on ourselves because of it.

There are no easy rides here. The characters in Chiew’s stories are smart, uncertain, brittle, needy, insecure, vulnerable, ambitious, resilient, sassy, anxious and aggressive and don’t always come out of situations ‘on the up’. They are also hard-working, giving more to society than society gives to them.

The messages delivered are tough ones. These stories depict many aspects of racism from the microaggressions of everyday life listed in ‘The Heartsick Diaspora’ to the brutal racial assault experienced by the elderly Malaysian woman in ‘Face’ which has a devastating long-term effect on her. The writer touches on reverse racism and even that bizarre phenomenon where a white person demonstrates a form of cultural superiority by accumulating trophy friends with diverse skin tones like ‘notches on [a] belt’ –‘Friends of the Kookaburra’.

What we’re left with is the overwhelming impression of how wearing it is to be a migrant: ‘People lose little pieces of themselves all the time in America,’ says the first person narrator in ‘Florida Rednecks Love Moo Goo Gai Pan’; ‘Every day there are social interactions, minute as each individual episode goes, but cumulatively they begin to absorb into your tissue. Little razors handed to you every day,’ says Chandra in the ‘The Heartsick Diaspora’.

Characters have their skills devalued. A father has a degree in Mathematics but ends up working in a Chinese supermarket. A son has a degree from MIT, ‘but here [in the UK] is just another computer geek’. They may have several languages at their disposal, whereas the host community has just one. And they may be acutely aware of how they’re looked down on, as in ‘The Chinese Nanny’, where Su Chin is astute enough to catch her employer’s negative implications from ‘the verbal undercarriage, the things one didn’t say to someone of a different race’. Despite all of this, the migrant must maintain his or her confidence to be able to survive.

‘Slipping between borders, it’s what EPs [Ethnic People] like us do,’ says Chandra in ‘The Heartsick Diaspora’. ‘What a hodgepodge people are,’ she concludes, ‘what willy wonkas, what bricoloeur and collage we hide within ourselves, identities super-imposed upon one another like composite negatives.’ Yet, she adds. ‘we sometimes choose to surround ourselves with bars.’ While birds fly freely, people cage themselves and each other.

Chiew is a sure-footed writer, writing perceptively about a complex issue. Her stories cover a lot of ground and require close attention, but nothing in them is superfluous. Her range of subject matter is impressive, and the contexts in which her characters operate – whether a cordon bleu restaurant in a fashionable part of New York, or a run-down tenement in Singapore – are all rendered with absolute authenticity.

It wasn’t immediately obvious to me how a couple of the stories fitted within the overall collection. Nevertheless, one of these, ‘Confessions of an Irresolute Ethnic Writer’, deserves a special mention. This extraordinary reworking of a Hindu-Buddhist myth repaid the effort I had to invest to get to grips with it. It is a bold statement that those of us who do ‘slip between borders’, who have multiple cultural sources to draw upon have something valuable to say and deserve a voice. That’s a point that agents and publishers should not ignore.

This book is highly recommended.

Janet H Swinney is a repentant education inspector from the North East of England who now dedicates her time to fiction and yoga. She has a long-standing connection with India and her experience of life there has deeply influenced her writing. Her stories have appeared in print anthologies and online journals in the UK, India and America. She has had listings in many competitions including Fish and the Commonwealth Writers’ Prize. She was nominated for the Eric Hoffer prize for prose 2012 and was a runner-up for the London Short Story Prize 2014.

Her first collection of short fiction, The Map of Bihar and Other Stories, was published in 2019 by Circaidy Gregory Press. It was positively reviewed by The Irish Times and got a special mention in Best British Short Stories 2020. Her second collection, The House with Two Letter-Boxes will be published later this year by Fly on the Wall Press.
www.janethswinney.com