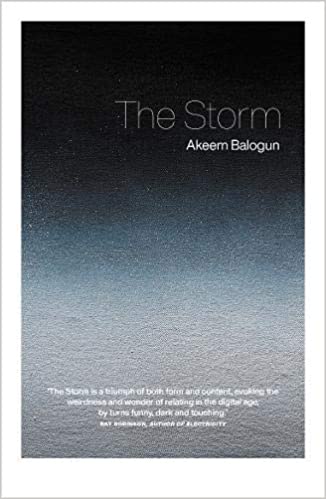 Brixton-born, Sheffield-dwelling Akeem Balogun started to write seriously during his gap year, when couldn’t find anything he wanted to read in the local library. Instead of being defeated, he set out to write the type of thing he and his friends might actually enjoy. Balogun and a group of friends founded Okapi Books for the same reason. They wanted to create something that could compete with video games and Netflix as a form of entertainment, and break down the marketing barriers that put off infrequent readers, by making their small press as cool as an independent record label.

It’s an inspirationally democratising attitude and DIY spirit, and it’s great to see people who are more concerned with entertaining readers than with impressing literary gatekeepers. Okapi Press have made a lovely job of producing The Storm, with artwork to preface each story by Arantza Pardo, and an accompanying audiobook narrated by performance poet Rider Shafique.

The Storm contains thirteen short stories set in near-future Britain, linked by an apocalyptic, seemingly endless storm that batters the nation. The stories range from one-page flash fiction to much longer and more developed pieces. They vary in tone and content from poetic meditations on the nature of conflict, to comedy, sci-fi, family drama, crime, superheroes and social commentary. The Storm is a bold and inventive collection, unafraid of experimenting with form: the story, ‘Marc Populaire,’ is told entirely in unanswered voice messages. Balogun’s writing style is spare and minimal, with little description. It reminded me a little of Raymond Carver’s short stories, where much is left to the reader’s imagination.

The collection seems incredibly timely, with 2020 being a year of crisis, and our ongoing fears of environmental catastrophe. But some of the stories are set decades after the storm has ended: this isn’t a bleakly apocalyptic book, but rather an exploration of the different ways people behave in extreme circumstances. Nor is it much concerned with the mechanics of the storm, of climate change, or analysing causes and consequences. The book exists more in a mysterious, dreamlike zone of possibility.

Most of Balogun’s characters are ordinary people, fully grounded in reality. Balogun rarely describes what his characters look like, and gives them ethnically ambiguous names, so the reader can imagine them however they want to. Balogun describes a multi-cultural world where people might struggle for money, but identity politics play little part in the character’s struggles. Questions of race, religion, gender and sexuality are mostly absent from The Storm, which makes a refreshing change from the current literary obsession with these issues.

The first story, ‘The Storm,’ begins on day eleven of the bad weather. It shows office workers struggling to get to and from work, glued to the TV reports by a poor weatherman who looks more and bedraggled and harassed as events continue. There are office politics and hints of romance, before the main character makes a brave and foolhardy to drive to ‘the west,’ where the storm is worst, to find his father. There is mounting tension and drama, the characters feel real, the situation surreal. It’s a great opener for the collection.

In the final story, ‘Weatherman,’ the TV weatherman is back again, in a nice little Easter Egg, to be confronted by the elderly mother he pushed into a nursing home. Things don’t happen as planned, and questions arise: is the mother completely senile, and imagining that her son neglects her? Has she been a bad and abusive mother? Or has she been unfairly treated by her callous son? Who is the victim and who is the villain? The story is interestingly ambiguous and has real depth to it. ‘Bonfire Hero,’ in which a masked vigilante called ‘Visionary,’ stalks the streets and contemplates his future, has similar ambiguity. Is ‘Visionary,’ a genuine superhero helping those in need, or is he just another menace to society? Is he even trying to help people, or is he just seeking fame and glory?

Another one of my favourites was ‘Buddhatarium.’ It doesn’t really have anything to do with the storm, so it feels a bit out of place here, but even so I really liked it. A couple resolve their relationship problems by buying a ‘meditator,’ a cross-legged Buddhist, who sits on a cushion in the corner of their front room and meditates 24/7, emanating good vibes and calmness. This is a classic ‘be careful what you wish for’ tale. It’s weird and delightful, and a funny commentary on the current trends for self-care and wellness.

‘Eden,’ and ‘Room Four,’ both have a Black Mirror feel to them, being about near future technology. I thought both these stories had great concepts, but could have been developed a bit more. The real interest in Black Mirror was always seeing the unexpected human dramas created by the technology, rather than the technology itself, and Balogun doesn’t quite manage to explore the implications of his ideas here. It also seemed a shame not to delve more into the heart of the storm: it’s an idea full of potential for life-or-death drama, but there are more stories about the aftermath of the storm, and the grief of losing loved ones than stories about fighting for survival. If Balogun really wants to rival Netflix for entertainment, he might need to bring more dramatic high stakes action to his next publication.

That said, the characters and settings are relatable, the stories are varied and full of interesting ideas, and the writing is punchy. The Storm is a great start for Okapi Press, and I hope Balogun and the team succeed in their dream of building a future where kids think small presses are as cool as independent record labels. That’s the best future I can imagine.