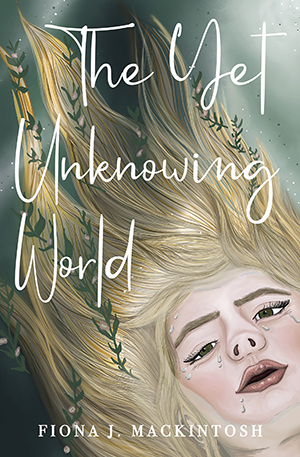 Fiona Mackintosh’s flash collection The Yet Unknowing World presents us with the world seen differently by an exceptionally gifted writer. Beyond the geographical division of its two halves – the Old World stories set in Europe, and the New World stories set in North America – the collection is striking for the manner in which individual stories expand well beyond their space on the page, zipping back and forth in time, playing with the limited perspectives of certain characters (or with insights that are all too keen) to suggest alternate realities and futures that have yet to unfold.

These are stories hell-bent on overstepping their boundaries, and many take on added significance from the stories that surround them. The sequence ‘Agape’, ‘Hindsight’, ‘Sole Survivor’, ‘Reign’, is a case in point. Here, a couple’s visit to Paros is juxtaposed with a migrant drowning, juxtaposed with a story about displaced persons in a dystopian England, itself placed next to a very short piece pitched at the other end of the scale of privilege. In ‘Nighthawks’, which riffs on the Hopper painting, a connection of a different kind is established when the reader becomes part of the story, drawn into silent communion with the female protagonist. In the powerful ‘Madonna and Child with Apocalypse: A Triptych’, three scenes often depicted in religious art, the Annunciation, Flight into Egypt and Madonna and Child, ricochet against a contemporary conflict. In part, it is these unexpected links between and within stories that make reading this collection such an exhilarating experience.

In Mackintosh’s world, the surface of things is very often only the start of the story. And yet, the surface is so very alluring. She has a flair for the arresting image, and her use of both colour and imagery adds to the visual quality of the stories and lends them careful accents of significance. One of the longer stories, ‘Triangle’, is a magnificent piece of storytelling that centres on a red velvet ribbon, at once an eye-catching image and the key to the story (when it turns out to be one of a pair).

The collection transcends genre, but there is a keen awareness of it in stories such as ‘Resting Place’, where we are taken right inside the head of a crime victim as she calmly considers the two ways in which her story might end. The next story, ‘Jericho Road’, might almost be a prequel. In two companion stories, ‘Old Woman Cooking Eggs, Diego Velasquez, 1618’ and ‘Manao Tupapau’, there is an astonishing historical imagination at play as the writer takes us beyond the canvas and into the lives of two very different women with great insight and sensitivity. The collection takes its title from a quote from Hamlet, and the title story uses quotes from the play interwoven with the writer’s own words to reimagine Ophelia’s fate (and perhaps the authorship of the play itself).

It is often said that flash fiction straddles the border between poetry and the short story, and the poetic instinct is discernible in Mackintosh’s sense of rhythm and in the resonant quality of the stories. A story like ‘The Chemistry of Living Things’ is as much a prose poem as it is a piece of flash fiction, but perhaps the distinction is meaningless when the material is as good as this. Throughout the collection, strong themes emerge — betrayal, lost love, art, time, the cruel pantomime of ageing — but the writing is so artful it will carry you off on its own wings.

Annemarie Neary is an Irish-born novelist and short story writer based in London. Her novels include The Orphans and Siren (Hutchinson/Windmill) and A Parachute in the Lime Tree (The History Press). Her short stories have been published in numerous places in the UK, Ireland, and the US including the award-winning The Glass Shore: Short Stories by Women Writers from the North of Ireland. She has won or been placed in competitions internationally, including the Michael McLaverty, Bryan MacMahon, Columbia Journal, Posara, Bridport, Fish, KWS/Hilary Mantel, Sean O Faolain, UPP Short FICTION. She is currently working on another novel.