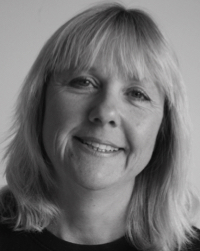 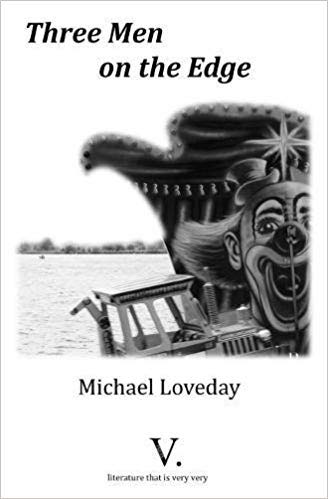 Michael Loveday’s searing observation of loneliness and unspoken desire are subtly interwoven in this collection of the three flash stories of Denholm, Gus and Martyn in his pamphlet collection Three Men on the Edge. They are heart-rending stories of remoteness. Of the three men in this story, I feel most pain for Gus, navigating a year with him, viewing his pain from a distant shore.

But first, Denholm. Author Michael Loveday cleverly and immediately delivers us into Denholm’s world, of days gone by when his mother ran a gift shop stocked, so it would seem, to overflowing with every gift any one could ever want as long as it cost less than £10; Spitfire key rings, footballing pigs, fragranced pillows, Union Jack beard trimmers. It is a world long gone but a world in which Denholm still lives, unable to free himself from a childhood permeated by the aroma of his grandmother’s gammon rolls. Denholm’s middle- aged world is far less appealing. Each very short chapter – usually less than a page – has a title, chapter two being ‘Denholm Is Relying On Several Handsets for Incoming Calls, Each with A Separate Telephone Line’, and then listed and described are the 5 phones and numbers that have relevance in Denholm’s life; an ordered, controlled methodology which, as we read more of him, realise is of great importance. The first telephone, a beige touchtone in the living room, is ‘mostly for Joan’s relatives (some grime on the handset)’, implying that Joan (his wife) talks more to her relatives than she does to her husband, and yet there is a different telephone in the kitchen to receive calls from Joan herself when she is out. It is telling that the only phone once used to speak with his mother is referred to as ‘venerable.’ Denholm’s fifth phone, in the hallway, is for ‘new Rickmansworth residents with whom he wishes to bond…this number is rarely shared.’ And thus Denholm’s oddness is laid bare by the second page, such oddness a peculiarity of nature borne of loneliness and which Loveday conveys so casually yet succinctly. As Loveday’s languid and dexterous language floats from the page we very quickly begin to see the world as Denholm does; his fixation for his neighbour Faith, his loveless marriage, his jealousy of Joan’s care and attention for a wounded pigeon, his feeling of being misunderstood all his life and his confusion as he tries to make all the ends of every day meet but rarely succeeds. In his shed, we learn that Denholm is re-creating Rickmansworth High Street in matchsticks, a project which involves much measuring and observational skill to ensure correct proportions, and much gluing and much thinking. When Loveday writes ‘This project must fill the bare, shrivelled garden that shelters at the heart of his life’, the bluntness of his words hit home.

And yet Denholm is busy. He is always busy making or doing, or swimming in thoughts that are tightly structured and contained, orderly despite his confusion of the world, but he is never at ease with those thoughts. In the final chapter on Denholm his loneliness is spread wide for all to see when Loveday writes of him returning home and regarding his house for what feels like the first time: ‘he is noticing fake Tudor beams…variegated brickwork, and a black swing gate, and a lawn unmowed, and a rusting garden roller abandoned upon it, and all this for the first time, as if this building did not house him and his wife, but contained only the lives of apparitions half-glimpsed and unknown.’ As Denholm has been focused on creating his matchstick world the real world has gone unnoticed, uncared for, unbothered with. Unloved and never, ever, understood.

The second man, teetering on the edge of life, of despair, of misery, is Gus. We walk through a year with Gus as he considers his loss and sadness, along canal paths, through the nature reserve of Bury, Stockers and Batchworth Lakes, and Springwell Lock, observing with him the wild and human life that lives there. Loveday’s subtle touch is again demonstrated in the six sentences that comprise chapter ii, offering us the tiniest insight to Gus’s torment when he says in the opening line, ‘His wife’s voice accompanying him’, to the last line ‘One dinghy flips, the pilot disappears beneath, only – as the vessel spins – to emerge, breathless, hugging the upturned keel’ and we know he is not talking about the sailor at all, but Gus, holding on for dear life, as he is almost drowned by depression. We feel his breathlessness like a weight on our own chests.

And so to Martyn. Trapped, tortured Martyn, watching friends Anja and Rob from a distance, yet involved in their lives. Close to the edge of madness and anger, I wonder where Loveday would have taken Martyn had he written two more flash chapters. Martyn’s loneliness is different from Gus and Denholm’s; it is more acerbic, wilder, and potentially uncontrollable. You can feel the cord tightening in every chapter, knowing that sooner or later it will snap. The skill with which Loveday describes Martyn’s anger while queueing at the supermarket check-out is at first very funny, until you realise that this is actually how Martyn feels and it is very disturbing.

All three men in this collection of flash fiction are on the edge of misery, grief and desolation which becomes apparent as the reader is drawn slowly and deftly into their worlds. Each man’s life is tenderly drawn, gently exposed, and you feel their sadness. Three Men on the Edge is an extremely moving novella.

Jacci Gooding is busy on the live lit circuit in Leamington Spa and Warwick. Author and ex-editorial assistant, she can also be found in the summer months reading her short stories at The Hawkesbury Upton Literary Festival and on the fringe at the Evesham Festival of Words. A Writers’ New competition winner and participant in Birmingham Rep’s Play in a Day.  Self-published in both digital and paper format, her short stories can be found online as well as on her blog. When not writing fiction, she writes short articles for Mayhem! magazine.