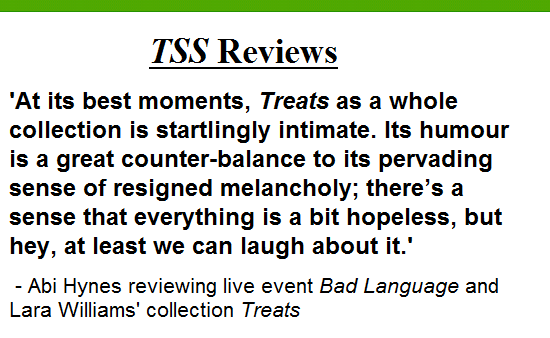 Bad Language has long been a linchpin of Manchester’s live literature scene. Winners of last year’s Saboteur Award for Best Regular Spoken Word Event (and shortlisted again this year), they hold monthly events at the Castle Hotel in the heart of Manchester’s literary capital, the Northern Quarter. They’re also known for their remarkable one-off specials all across Manchester and beyond, which include hosting the likes of Kate Tempest and Hollie McNish, their recent Literary Death Match, and appearances at Kendal Calling.

Based on a first-come-first-serve sign up process, with half the performance slots always reserved for new performers, the joy of a Bad Language open mic line up is that it’s always a bit of a lucky dip. It’s also a brilliant policy that’s helped the night to go from strength to strength over the past five or six years; a show of hands for new attendees shows that nearly half the room are new readers or audience members.

In the absence of his usual co-host, Joe Daly, this night was run solo by Fat Roland, who comperes with exactly the sort of ease and humour that you would expect from someone who spent last summer at the Edinburgh Fringe, learning just what to do with an audience. As ever, the back room of the pub was packed out, with latecomers squeezing in to sit on the stage; the vibe warm and friendly and energetic. Fat Roland opened with his own performance piece (which I won’t attempt to categorise) in which he improved all of Spielberg’s non-Jaws films by adding sharks into their synopses, with results like ‘A shark tries to phone home’ and ‘Two sharks hang out in a temple of doom’. It was very funny, and it set a gentle, light-hearted tone for the performers who followed him.

The open mic, then, was a predictably mixed bag, which didn’t matter at all, as it was punctuated by some really shining performances. The pace was kept up by the well thought out four minutes of allocated stage time, and by Fat Roland who kept us chuckling in the changeovers with (usually filthy) anagrams of the performers names and other carefully constructed nonsense. Most of the poetry sets ended up a bit rhyming couplet heavy for my taste, with the exception of Mike Conley, whose dark, sinister and very funny set was a real highlight of the evening. His work seems to blur the lines between poetry and flash fiction, and his short, sharp pieces were deliciously grisly. There were ‘biscuity screams’ as we witnessed the demise of a dough-based sexual predator, and a game of ‘Whose tongue will get closest?’ with a severed thumb that ‘smells like the thing you can’t find in the fridge’. Mike launches his second poetry pamphlet, More Weight published by Eyewear, this month, which looks set to be well worth your attention.

In terms of short stories on the open mic, my highlight was Sarah-Clare Conlon, reading two recently published tales from The Bolton Review, inspired by the town she works in. They were lyrical but precisely observed little tales, which took us from tensions building within a gated community to a rather mesmerising meditation on Bolton’s Sweet Green Tavern that suited her understated performance style and brought the noise level in the room down to a pleasant hush.

But overall, this was definitely Lara Williams’ night. Headlining the event, she read an abridged version of a story from her new collection, Treats, which has also been shortlisted for a Saboteur Award this year. My only previous experience of her work was via the totally-brilliant-what-do-you-mean-you-haven’t-heard-it-yet?? End of all Things Podcast, which Lara was a guest on recently, and read another story from this collection, ‘Dates’, which had me suddenly enthralled at my desk in the middle of a long work day. She also talks interestingly about her choice to write many of the stories in Treats in the second person. It’s a technique that gives these pieces a strikingly direct and personal tone, like conversation with your sister in the bath: ‘Ignore the pain when he says he doesn’t like skinny girls. This is flattery. You are being flattered.’

In both cases of hearing her read, Lara’s been a slow burner for me. There’s nothing overtly performative about her readings; she doesn’t put on a show. At Bad Language, for the first minute or so, I found myself struggling to tune into her frequency, until I realised that she had drawn me in without me noticing, and the room was silent, and we were all completely focused on her quiet voice. It was satisfying to see the quality of her prose shine through in this way, without the trappings of a more flamboyant performance. There was a long line to buy her books later; a good sign that the whole room had been rooting for her like I was.

The piece she chose to read, ‘One Of Those Life Things’, about an abortion after a break up, was full of luminous lines that I couldn’t write down fast enough. After one of them, the friend I was with leant over to me to see that I was already scribbling, and whispered, ‘Oh good, I’m glad you got that one.’ (The line, I believe, was: ‘It feels like it is raining everywhere inside.’) And it was funny too; the unassuming but perfectly captured encounter with a GP was the turning point at which the room really began to warm to her.

‘…he types something, once more, into his computer; assumedly checking the box that says One Of Them.’

At its best moments, Treats as a whole collection is startlingly intimate. Its humour is a great counter-balance to its pervading sense of resigned melancholy; there’s a sense that everything is a bit hopeless, but hey, at least we can laugh about it. I’m a big fan of the opening story, ‘A Lover’s Guide To Meeting Shy Girls; Or; Break Up Record’, which swings between sweet and nasty with impressive grace, and there’s a curious Oedipal undertone to ‘A Single Lady’s Manual for Parent/Teacher Evening’ that made me want to read it several times through to try and unriddle it. My ultimate favourite, though, has got to be ‘This Small Written Thing’, which builds gently and slowly to its small, compromising conclusion with subtlety and elegance.

Lara Williams is not my first joyful discovery at Bad Language, and I know that she won’t be my last. It’s the event that I always tell people to go to if they want to dip that first tentative toe into the waters of literary life in this city, and this was another evening that didn’t disappoint. If you haven’t tried them out yet, get them on your list, sharpish.

Abi Hynes is a drama, fiction and poetry writer based in Manchester. She runs theatre and film company Faro Productions and cabaret collective First Draft. Her work has been featured in a range of print and online publications, including Litro, The Molotov Cocktail, The Fable Online, Spelk Fiction and Foxhole Magazine, and she regularly performs at live literature nights around Manchester and beyond.