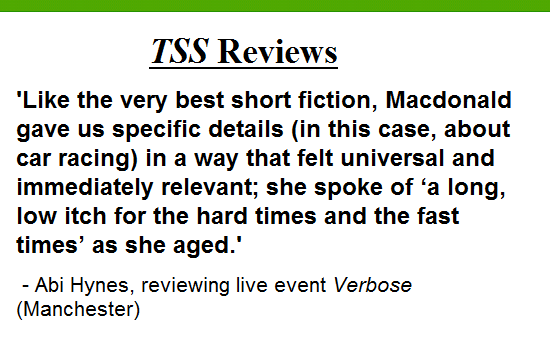 For those of you who haven’t discovered this yet: Manchester is home to a remarkable live literature scene. It seems to grow on an almost weekly basis; new nights spring up, find their groove, and readers and audiences come a-flocking. Importantly, these nights aren’t just focused on poetry and spoken slam-style tournaments (though Manchester has some excellent examples of those, too). Many of these regular and one-off events here also make a large and comfortable home for the short story.

Verbose – the spawn of local wordsmith Sarah-Clare Conlon – is one of the relatively new nights that have started to spill out of the city centre and into the suburbs, and it regularly has a strong short fiction focus. I joined them at their January event to celebrate their first birthday, when three short fiction writers, Ailsa Cox, Jim Hinks and John D. Rutter, were headlining. It was a varied, warm and fleet-footed event (due to the quick-fire three minute open mic slots) that made me glad I’d ventured out of my usual Northern Quarter stomping ground to huddle in a packed out room at the top of the ever-welcoming Fallow Café.

Ailsa Cox is one of those writers who is an immediately compelling reader of her own work. The narrator of her work-in-progress story was male, which I frequently forgot, although whether that was down to the writing or just a pitfall of hearing any writer read in the voice of a differently gendered character, I’m not sure. But the result of this forgetting was that I interpreted ‘The Empty Quarter’ as a sort of memoir of her own writing career, which it quite possibly isn’t. But, whether I had it upside down or not, Cox’s prose has a lyrical but sharply-observed quality to it that makes it feel both authoritative and personal. I don’t have a copy of this currently unpublished piece to quote from, but you can see the same flair in her story, ‘Hope Fades for the Hostages’: ‘The house feels abandoned and hollow, and you yourself are its wandering ghost, pouring a whiskey, reading last week’s papers while you’re waiting for tomorrow.’

John D. Rutter’s short story ‘Motivation’, which features in Edge Hill University’s ‘7 Fictions’ collection alongside stories from all his fellow headliners, is an accessible and relatable tale of domestic heartache. It delivers a couple of key scenes from the difficult journey of a couple trying to conceive through IVF with professionalism and heart. Again, hearing him read it, I make the assumption that it’s a story he has a personal connection to; though this time I’m sure it’s the writing that can take the credit. It has a warmth and an intimacy to it, and it makes a third person story – the first half of which is told mainly through dialogue – feel like first person narration.

Admittedly, there’s a kind of clumsy refusal to make his characters ‘right on’ that I didn’t take to (on the adoption process: ‘They have targets for gays and minorities’) and I’m afraid I huffed out loud at the ‘nurse wasn’t my type. Moustache’ gag. The most striking feature of ‘Motivation’ is its turning point, when Rutter’s viewpoint zooms way out, which works better on the page than it did in performance. He moves the reader/listener from sitting with two friends in a pub, to a fly-on-the-wall in the hospital, observing a ‘husband’ and ‘wife’: ‘The man in the chair stares at his wife until she twists her head round.’ Spoken out loud, it had a distancing effect, but reading it in print later, with more time to linger over it, I found more subtlety and purpose in this technique. John is a former TSS short story winner and you can read his work ‘Looks Like Rain’ here.

It was Jim Hinks’ story that was probably the highlight of the line up for me, made all the more impressive by his surprising confession that this was his first time reading one of his own short stories at a live literature night. (I’d expected him to be a regular on these stages, given his role with Manchester’s Comma Press, for whom he developed and now runs the excellent MacGuffin platform, showcasing audio and text versions of fiction and poetry for free.) ‘Green Boots’ Cave’ combines the story of the death of mountaineer David Sharp on Everest with a flashback from Hinks’ own real or imagined youth. There’s some effective showmanship to his reading of it; he starts by talking about the inevitable ‘mind wandering’ that happens at literature nights, actively encouraging us to let our minds drift and think of something else when he reaches the flashback part of the story. He gives us a checklist of things to contemplate, to insert ourselves into the tale, which swing from ‘The first time you realised you were clever’ to ‘How you’ve kept going, and what it required of you.’ It’s a short story that feels built to be read aloud this way. It’s a story about dreams, and the form makes us complicit in this dreaming; active co-creators in the narrative. In another writer’s hands, this might have felt like a bit of a party trick. With Hinks though, it is tightly executed and moving: ‘This is where you come in. As he freezes, David begins to dream, and he dreams that he is you.’ You can listen to Jim’s short story on MacGuffin here.

Although her set technically consisted of two narrative poems rather than stories (a distinction that often feels less important in performance), a special shout out is also due to Tammy Macdonald on the open mic line up. Her poems, which could easily have been beautifully crafted, lyrical short stories, resurrected both Ozymandias’ wife, Nefertari, and introduced us to the incredible late Formula 1 driver, Maria Teresa de Fillipis. The latter in particular was a touching tribute that still lingers in my memory. Like the very best short fiction, Macdonald gave us specific details (in this case, about car racing) in a way that felt universal and immediately relevant; she spoke of ‘a long, low itch for the hard times and the fast times’ as she aged. And it was her retelling (real or fictitious, I have no idea) of de Fillipis’ mother’s advice to her (‘Go slowly. But win.’) that travelled home with me on the bus when the evening was over. Listen to Tammy read her work here.

There was no trace of literary snobbishness at Verbose that night, and headliners and open-mic-ers alike took on the friendly, storytelling vibe of the evening with gusto. And if audience numbers are anything to go by, this little oasis of creativity in the heart of Manchester’s student village is going from strength to strength.

Abi Hynes is a drama, fiction and poetry writer based in Manchester. She runs theatre and film company Faro Productions and cabaret collective First Draft. Her work has been featured in a range of print and online publications, including Litro, The Molotov Cocktail, The Fable Online, Spelk Fiction and Foxhole Magazine, and she regularly performs at live literature nights around Manchester and beyond. Follow her on Twitter: @AbiFaro