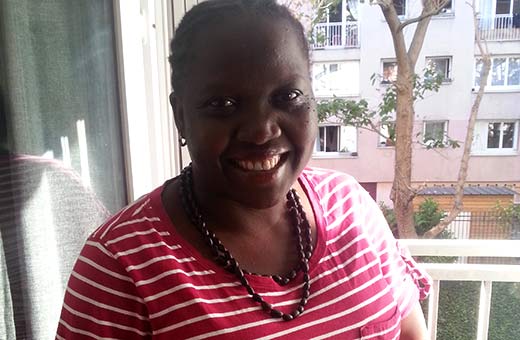 Thank you for agreeing to this interview. I would like to know, what is Beatrice Lamwaka like?

Ah, Beatrice is someone who loves reading and writing, but she wishes she could write a lot more and read a lot more than she is doing. She is lucky to have been recognised for her writing. And She hopes to write a lot more.

Tell us about your writing journey. Were you always conscious that the odds were against you, given that you also teach…

I never really taught much, just my teaching practice. For some reason, I believed that I needed to set my wings free and I thought that teaching would contain me to the classroom. And I wanted more. But now I teach creative writing every now and then. I can’t really run away from teaching.

I started writing seriously when I joined FEMRITE – Uganda Women Writers Association, in 1999. I met women who shared the same dream with me and we supported each other to write and since then I got hooked. I have written on and off but now I am sure that writing is what I want to do. I know I can’t live without it.

I have mainly written short stories which are published in different anthologies and journals around the world. And I have taught in classes, too.

Some critics have labelled a vocation in the creative arts as an “airy pursuit”. As a player in the industry, what would you suggest as the remedy to this perception?

Critics should read a little bit more. Creative arts – like any work – involve a lot of brain work and they should appreciate whatever someone comes up with.

In 2011, you were shortlisted for the Caine Prize for African Fiction. Tell us how it felt having one of your short stories shortlisted. And how did that change your trajectory as a writer?

It made me realise that stories have their own lives and I should give them their best during the creation process. I am more like a mid-wife to the story and I must make it credible for the readers to make it the way they want.

Your short story, ‘Butterfly Dreams’ (read online here) tackles the universal themes of change due to war, nostalgia, and loss. Can you tell us what it was like penning that story?

Butterfly Dreams is one of my most difficult stories to write. I was dealing with emotions and questions that I didn’t know answers for. How do you deal with a formerly abducted child? My brother was once abducted by rebels and when he returned home, he wasn’t the same again. It took me such a long time to write because it was emotionally draining for me to write and sometimes I would stop writing it but I knew that I must write it. I was glad when I completed writing it.

You have been quoted saying, “Silence was the only form of survival…” Could you explain what you meant? Have you always used writing as a means to process issues?

We have often used silence to avoid talking about difficult issues. And it may be that many families don’t talk about issues that need to be dealt with. I come from an area that has faced traumatic experiences and all we wanted was to get through it, so silence was the answer.

The protagonist of the short story, Lamunu hails from Alokolum and so does Beatrice. Would you say some of your work is autobiographical, given the evidence suggested by this short story?

Ah, I write about what I know best. But now I am trying to let my mind free to write about emotions that I am afraid to deal with.

In ‘Queen of Tobacco,’ and ‘The Market Vendor’ you address gender related issues in Ugandan society, particularly those facing women: drug use and its effects, war, and violence, to mention but a few. Could you kindly explain your concerns in this area?

Uganda is a very patriarchal society and as a woman I am faced with different issues on a daily basis. This is where I draw my motivation to write: challenges that I face or women face. In Uganda, men feel like society owes them simply because they are men. Why should this be so? Yes, because society says so.

Novelist and poet Okot p`Bitek is one of your influences. Will you, at some point, write and translate your work in Acholi?

Okot p’Bitek made me confident to write about my culture. I will forever be grateful to him. I have just had my short story, ‘Silver Fish’ translated into Acholi. I have written a number of poems in Acholi.

Examples include A Thousand Voices Rising an anthology of poems; ‘Mwoc Acholi’ and ‘Nyeri’ two short stories – all of which are written in Acholi.)

Some of your short stories have been translated into other languages, what are some of the benefits and challenges of this process?

No challenge on my part because the translations are done by professionals and sometimes in languages I don’t speak, ‘Chief of the Home’ became ‘el senor de la casa’ in Spanish and is forthcoming in Arabic as well. ‘Butterfly Dreams’ is coming out early next year in French. This means I receive new readers in places where language would have been a challenge.

There has been a remarkable surge in literary prizes and awards on the continent for the writer; Short Story Day Africa; Golden Baobab, Brunel University African Poetry Prize; Etisalat Prize for Literature, Writivism Short story prize; the Mabati-Cornell Kiswahili Prize and the BN Poetry award among others. What are the permutations of these efforts and how can a writer make the best of them?

First a writer must write to get these prizes and they must give their short stories their best shot for them to get noticed. Write and submit. I made it a point to apply for wherever or whatever I qualify and this makes things happen in my life.

Accessibility to books and journals remains one of the publishing challenges. How do you think social media can help in solving the book distribution challenge?

I don’t know how this works because I’m a writer and not a publisher, but I am sure that social media provides writers with space to talk about their creation and provides greater accessibility for readers.

And what would you say about the self-published writers?

I am not self-published so I would not know.

Later in 2012, you founded the Arts Therapy Foundation; tell us more about your work there or other advocacy projects?

This is something I started to deal with the issue of mental health which is a big issue in northern Uganda after two decades of war. The idea is to use arts, which we already use, but this time as therapy.

There are some robust efforts taking place in the form of literary festivals, creative workshops, etc. Most of them aim to reduce the power gap in the industry and also give back to communities. How should writers and artists position themselves to utilise such opportunities and what has been the response to these opportunities?

Most of the times emerging writers have to apply in order to be part of such training. I encourage writers to network with other people who they share dreams with and that way they have a support system to continue writing.

What are some of recently published books you’d recommend to the readers of TSS?

I am deeply in love with Haruki Murakami. I have just completed reading Kafka on the Shore, Dance, Dance, Dance and Hard-Boiled Wonderland and the End of the World. I can’t get enough of him. I am also into Octavia E. Butler. These writers have influenced me to open my mind and be as creative as I can be.

They should also read Chimamanda Adichie’s Americanah and Half of a Yellow Sun, Noviolet Bulawayo’s We Need New Names, Doreen Baingana’ s Tropical Fish, and Nansubuga Makumbi’s Kintu, among others.

Would you kindly share insights on your current projects?

I read somewhere that speaking about short stories before they are published jinxes the stories and I don’t want to do that to my short stories! But I am always working on a story here and there.

However, perhaps as a special favour for the readers of TSS, can you confirm the working title of your current project – a novel, I believe…?

Thank you for your time Beatrice Lamwaka.

Beatrice Lamwaka is the founder and director of Arts Therapy Initiative, a non-profit organisation that provides psychological and emotional support through creative arts therapies. She writes articles, short stories, poetry, and is working on her first adult novel. She is a recipient of the 2011 Young Achievers Award. She was shortlisted for the 2011 Caine Prize for African Writing and was a finalist for the South African PEN/Studzinski Literary Award 2009. The anthology of short stories, Queer Africa: new and collected fiction (2013), which includes her short story, won the 26th Lambda Literary Award for the fiction anthology category in 2014.