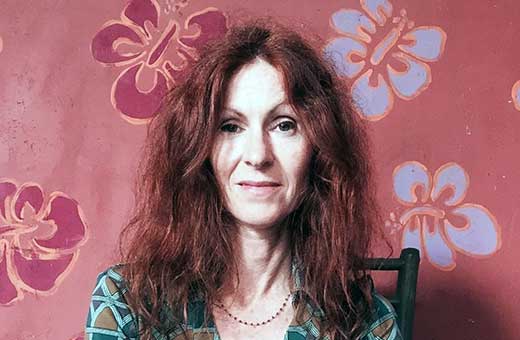 Hi Catherine, thank you for speaking to TSS Publishing. We absolutely loved your winning short story entry ‘They Came from the East’ and are delighted to be able to speak to you about short stories. Our first questions relates to your submission – what was the inspiration behind it?

I’d just read Shirley Jackson’s story ‘The Lottery’ and it knocked me about; plus at the time I was reading about responsibility for Srebrenica. I live in north-eastern Italy not so far from the Slovenian border, and have friends who grew up in the former Yugoslavia, but I’d been living in Ghana when it happened. I read a lot of documentation and was horrified by the idea of people traipsing through the European countryside in the summer time – human corridors – and how so many were drawn into the woods and executed. I wanted a character who had been a war victim, but also a man who had pulled the trigger.

It’s an extremely well-executed short story – how many drafts did you go through? And how many would you say you did on average for your short stories?

This was quite a short piece and I don’t think I did so many drafts. I had done a lot of reading up beforehand and I had the location in mind, plus the fact that they were all musicians, so it came out quickly. Especially the ending.
My longer stories are often very shoddy and require much reworking and improving, as they tend to be wordy and go astray. I don’t usually do structural changes but a lot of refining as the story comes clear to me. I try to edit as I go along and won’t go ahead until I am happy with a section. But that can change overnight! Every time a piece is rejected I go back to the drawing board.

Were you trying to offer a particular message with ‘They Came from the East’, or perhaps explore particular themes that are important to you?

I wanted to write a story about evil! I mean real, contemporary and historical evil. I have never done this before.

If you were to pick three defining features of the short story, other than its length, what would they be and why?

Impact, compression, surprise.
I don’t like tricks or false voices, but I do enjoy stories where I cannot foresee an outcome, where I feel I am completely in the hands of the author. I love authenticity, and restraint.

Why do you think the short story is having what some have called a second renaissance?

Well in publishing terms I’m not sure that’s the case. So often an agent will say, But do you not have a novel? And not so many major publishers are willing to bear the low sales and difficult promotion of the short story collection. Short story lovers are easily identified, but many readers think there is more value or purpose in buying a novel.
That said, the internet has made people more used to reading in a compressed, jumpy way, which perhaps lends itself to the short story experience. There also seem to be more literary reviews and short story evenings than before. I think the form is highly respected and admired, and there are wonderful collections out there.

Returning to your own craft and graft, do you have a particular method in composing a short story? Do you listen to music? Perhaps sit at a café, watching the world go past?

I jog and also drive a lot – in silence – and that’s when I get ideas. I do borrow heavily from places where I have lived, and stories that have gotten under my skin. I won’t start writing unless I’m happy with my starting point; I think beginnings are very important. But If I try and map out the story I usually change everything. Everything.
If I’m working on a first draft I need silence and many hours ahead of me to enter the story. I work in my office at home and am very superstitious about speaking about my current story until it is completed. I don’t think I could work in a café, I’d probably end up chinwagging to the person next to me and going shoe shopping.

Which short stories have most inspired you?

Initially, Katherine Mansfield’s The Garden Party. The language used to make me tremble with its spare elegance. Then I fell in love with the work of a Zimbabwean writer called Dambudzo Marechera who wrote a collection called The House of Hunger. Language and anger and power. Plus Ben Okri’s Incidents in the Shrine. I do love location and learning and being an active, compelled reader.
Writers whose short stories have inspired me include Mavis Gallant, Daphne du Maurier, FlanneryO’Connor, Grace Paley, Anton Chekhov, T.C. Boyle, James Salter, Richard Ford, Guy de Maupassant, D.H. Lawrence, Haruki Murakami, Patricia Highsmith.

How old were you when you started writing short stories – were you supported in your writing by family, friends, mentors?

After deciding I would not be a lion tamer or a vet, as a young teen I pretty much understood that I would only ever write. I tried graphic design and I do love image, but I need words. Of course my parents wanted me to become a journalist, but I ran away to Paris. What was unforeseeable was that I had studied Modern African Independence Movements, then by chance ended up spending thirteen years in Africa, where many of my stories are set.

Finally, what advice would you give aspiring short story writers?

Read, read, read! Observe, observe, observe.
When you are working, explore every thread that comes into your head – let go and trust your subconscious. Don’t try to control the story too much. That can come later. And don’t be afraid of trashing a story if it doesn’t take off. Be excited by what you are writing. Love language but be nimble with it. Explore dialogue and be listening to people all the time. Don’t sit down to write with set-out ideas – the act of short story writing should be as central as the result itself.
Support other short story writers by buying their books! And if you are a short story writer yourself, subscribe to the print magazines that you can afford!

Super – thanks for a cracking interview about the art of the short story!

Thank you for having me!

Catherine McNamara grew up in Sydney, ran away to Paris to write at twenty-one and ended up in Ghana running a bar. Her collection The Cartography of Others was published by Unbound last year. Pelt and Other Stories (2013) was longlisted for the Frank O’Connor International Short Story Award and semi-finalist in the Hudson Prize, and her stories and flash fiction have been Pushcart-nominated and published widely. Catherine lives in a farmhouse in Italy. Catherine can be found on Facebook, Twitter @catinitaly, and Instagram: catinitaly. You can also read her short story ‘They Came From the East’ that was published on TSS.