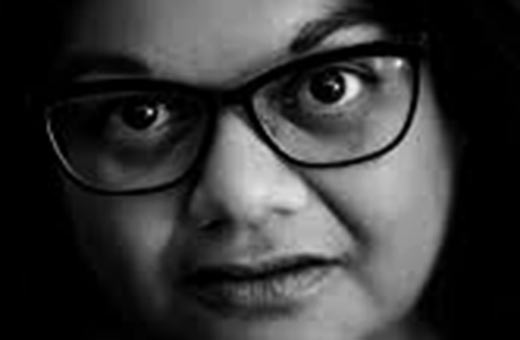 Ingrid Persaud is a writer and artist from Trinidad and Tobago. She came to writing and fine art having first pursued a successful legal career that included teaching and scholarship at the Fletcher School of Law and King’s College, London.  Her first novel, If I Never Went Home was published in 2013. Ingrid is the 2017 overall winner of the Commonwealth Short Story Prize with her first short story, ‘The Sweet Sop’.

Congratulations on winning the Commonwealth Short Story Prize, Ingrid. Your winning story, ‘The Sweet Sop’ is your first short story! (Read ‘The Sweet Shop’ here) How do you feel to have such a grand debut into the world of short story writing?

Thank you for such kind words. I was happy to be short listed and the rest was a surprise and a little overwhelming. I’m worried that the next thing I write won’t live up to expectations.

Having written a novel in the past, I should think you have little to worry about. What inspired you to try out the short story form? An experiment? Was ‘The Sweet Sop’ written before your first novel or after?

‘The Sweet Sop’ was written after my novel ‘If I Never Went Home’ and during the writing of my second novel. Novel writing is a marathon and I began to think I would never finish anything. I took a little break and tried to write a short story and this is what emerged. There is a lot of satisfaction in completing something in weeks rather than years.

What’s your writing process like, for novels and short stories?

When I am writing, the day starts early – around 5am and I try to get 800 -1000 words out by lunchtime. Most days it’s agony to reach that target. I try to leave my desk for lunch and then deal with domestic life (the husband, the teenagers, the dogs, the chicken). After dinner, I often do a couple hours or take the time to read. Work is ever present and my family complain that my default mode is always to go back to the office.

I can imagine how pretty tough it must be combining those. I enjoyed the language employed in ‘The Sweet Sop’, with its traces of Caribbean alterations. Except for the few times when the narrator switches to standard English.  But I’d like to know, why was it important to you to have your characters speak in that way?

Western writing has always embraced regional dialects and slang and presented it as something that can be universally accessed once the writing is solid. This is simply another version of dialect following in this rich tradition. The story is set in Trinidad and the voice demanded quite exact language to be authentic.

Aside from language, you somehow made the story, though sad, less tragic.  There are many expressions that could otherwise have tugged at the reader’s heart but they come off lightly and humorous.  Do you often consciously employ humour as a style or does it just happen?

Humour is a way of coping and making sense of life’s challenges. At this stage in my writing, I don’t know how else to access these fraught issues other than through humour. I’m with James Thurber when he said that humour is emotional chaos recollected in tranquillity. If I had the talent I would do stand up comedy.

Ha ha. I’d totally be at your shows! There’s an obsession with chocolate from the beginning of the story right until the end – to the extent that even when Reggie was dying,  I found myself thinking about food, which partially distracted from the tragedy.  It intrigues me how you were able to ‘trivialise’ Reggie’s pain; although he was suffering, you masked it so well with food and humour.  Would it have made any difference if you’d allowed your reader to feel the pain of Reggie’s illness? What were you trying to shield with the chocolates?

While chocolate melts through the story I don’t think it is a shield. What I hope is that it is a portal to understanding Reggie’s pain and Victor’s heartbreak. To taste another’s pain is impossible but maybe the giving and receiving of chocolate gives us a hint of that abyss.

It appeared though that the weight of Reggie’s illness was dumped on Victor, his son. After his father’s death, he was so guilt-driven, he became addicted to chocolates, even at the expense of his weight. I felt you were punishing the wrong offender.

It is a contradiction to say a writer is simultaneously director and follower of a character. Would you believe me if I told you that is where the character led me? And is the guilt not mixed with love and longing and regret? Happily-ever-after would have been untrue.

Hmm, that’s a point. But for the Leukaemia that befell him, I think it was necessary for Reggie to have felt the pain of cheating and being separated from his son. I enjoyed how much he yearned to hear Victor call him daddy.  Are your stories usually based on any ideas or beliefs?

From another angle though, ‘Sweet Sop’ can be said to be about marital unfaithfulness and its ills. It was really remarkable for me to discover that Reggie’s mum had jilted Reggie because he was unfaithful. Made me think about what the world would be like if women continually and courageously walked out of abusive and unfaithful homes. Was this a part you deliberately explored?

The women in the story are secondary to the father-son relationship but they are certainly not to be dismissed. My own upbringing features a network of strong Caribbean women and I wanted to bring some of that experience into the work.

Talking about Caribbean works. My first contact with Caribbean literature was a book, Jane’s Career written by H. G. de Lisser.  I can imagine that Caribbean writers have long moved on from the days of Jane’s Career, in terms of style and maybe themes. What changes can you identify in the contemporary and past Caribbean writings?

Caribbean literature has always been vibrant and our writers are now claiming previously untouched genres. Several collections of noir writing have appeared. Sci-fi, not often associated with West Indian writing, is making waves with work by authors like Karen Lord. I’m enjoying the fresh voices of authors like Kerry Young and poet Loretta Collins Klobah. And of course the region is getting international attention with Kei Miller and Vahni Capildeo both recipients of the Forward Poetry Prize and Marlon James is our first Booker Prize winner.

A remarkable development it is. You’d mentioned about how your upbringing featured strong women  whose experiences you’ve tried to infuse into your work. What are your thoughts about feminism as regards writing and would you identify as a feminist?

If by feminist you mean someone who stands up for basic human rights for women, for women living in poverty, for women suffering sexual abuse and for specially marginalised groups such as black women and gay women, then yes, I am a feminist. Do I feel the need to make that part of my creative work? No. If the artistic intent squares with having a feminist character then of course I will pour my energies into it. My aim is to write the best fiction I can rather than the best feminist text.

Let’s talk about your background. Your bio says you started writing fiction late in your life. What year would that be and what attracted you into fully pursuing it?

I came to writing through the scenic route of law and fine art. It’s been a search to find a way of relating to the world. That it took until my mid 40’s to finally know this is what I want is a little unfortunate. I write slowly so unlikely to complete a decent body of work but I’m going to give it my best shot.

I think it’s inspiring that you still pursued it however late you found it. Also because you’re already gaining global recognition as a writer with the Commonwealth Prize. What books or authors have shaped or influenced your writing?

My parents devour books so I have always been exposed to a variety of literature. It’s tough to come up with favourites. Certain authors fit better depending on where I am in my head space but I admire the work of Colm Toibin and Paul Auster and enjoy re-reading Marquez and Borges. My latest find is a little known author, Felipe Alfau who penned magic realism before it got the name.

I see you enjoy lots of magical realism. Are there ways in which you’d say your work as an academic and a fine artist influences your fiction writing?

Both law and fine art demand their own peculiar ways of seeing the world. As much as I regret not starting to write earlier I wouldn’t be who I am without those disciplines. They give me the freedom to tackle issues that I may have shied away from.

And you’re currently working on your second novel. What is it about? Should we expect some more chocolate tales?

I am rewriting a terrible first draft and there isn’t a bar of chocolate in sight. Death and journeys are a big part of the plot. When the manuscript is like a firm slab of chocolate rather than a random mixture of soft centred bon bons we can talk again.

Jennifer Chinenye Emelife was born in Northern Nigeria, Sokoto state. She studied Literature in English in Usmanu Danfodiyo University, Sokoto. She lives in Lagos where she writes, when she isn’t teaching Literacy to kids. She is also rounding up a Post Graduate studies in Education. She believes that the African literary sphere suffers because no one covers its stories. Lead correspondent at Praxis Magazine for Arts and Literature, she has written reportages and interviewed writers, publishers and other literary experts. In 2015, she was shortlisted for the Farafina Trust Creative Writing Workshop and in 2016, she was selected as one of the participants for Writivism Creative Nonfiction Workshop held in Accra, Ghana.