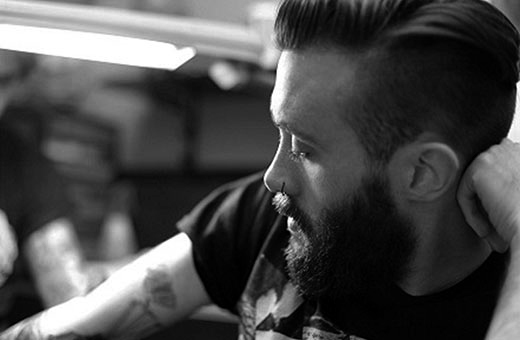 When did you first begin to write and at what point did you know it was something you wanted to make a career from?

Writing is something I’ve always done. Even when I was young, 10 or 11 years old, I remember writing lists upon lists of anything and everything. English was always my favourite subject at school and I’d read voraciously, writing stories about what I was reading. I’d alter the ending or add new characters in or kill someone off. I guess I started taking writing seriously when I studied Creative and Professional Writing at the University of Glamorgan, I had my first ‘proper’ piece published when I was 18 and that was probably when I decided that writing is what I wanted to do in my life.

Was that a difficult decision? Were you supported by friends and family?

No, it wasn’t a difficult decision. Money can be tight, but life isn’t really about how much money you’ve got in the bank. Writing is the only thing I feel I’m good at, and the only thing which I get catharsis from. My family were really supportive, always have been, and my friends were, too. However, I think some of them thought I was living on cloud nine when I’d tell them I wanted to be a writer. My friends would read my work before I’d send pieces off for publication and they’d always refer to me as ‘a writer’.

Why do you think writing is important?

To me, writing is important as it allows me to empty my head of all the ideas that are going on. It’s like a jumbled mess in there, and writing allows my head to be emptied out like a blocked sink. If I didn’t write I’d probably be very uptight and irritable. I feel that writing is important, in general, as it connects people and communities in a way which only writing can do. For example, write about your hometown and schoolmates you forgot existed will contact you saying they enjoyed the piece or will ask why you have written about them. It can be surreptitiously done, or not so, but I feel writing allows readers and writers to connect and communicate in a way which, slowly, is dying out: the art of conversation.

As well as writing short fiction, you’re also a poet. What can you tell us about the relationship between these two forms?

I didn’t start writing poetry until I began my MA course in Creative Writing at the University of Wales: Trinity Saint David. I was tutored by the great and inimitable poet, Menna Elfyn, who saw a poetic voice in my fiction and we’d dissect my pieces and structure them into pieces of free verse. If I didn’t write fiction, I wouldn’t be a poet. If I didn’t write poetry, I wouldn’t be a fiction writer. The two forms can be very closely linked in imagery, metaphor and sense especially in flash fiction. However, it’s up to the writer to decide whether a piece is going to be fiction or poetry. You can’t do both. If a piece of fiction just isn’t working, try structuring it into a poem – and vice-versa.

Who are your favourite contemporary short story writers and poets – why?

Haven’t got favourites, as such, but writers I’ve read recently: Jon McGregor, Monique Schwitter, Wells Tower, Adam Marek. Poets: Kei Miller, Dalton Day, Daniel Sluman. Basically, I like writers who have a story to tell which can directly affect you at the time of reading and which you won’t have to analyse over and over to understand what’s being said. All the writers and poets I’ve listed above are people who I have recently read, or am reading, and who – in one way or another- are influenced by personal experiences, the modern world and their social environment.

Do you have a writing routine?

No. I’ve never had one. I can’t pick a time to write. When my mind tells me an idea, it’s then I write, which is often about three times a week.

We love your short story ‘The Hooey of Ray Bubble’ (read here)– There’s a lot of engaging language and imagery in those opening paragraphs, is this something you consciously strive for, or does it come naturally?

It’s something which comes naturally. It’s my writing style, something which I think I developed over the years. I remember reading Vernon God Little and thinking the descriptions were brilliant, so I’d say D.B.C Pierre influenced me on that one.

What was the most difficult hurdle you faced when writing the short story?

The valleys is a close-knit community where everyone knows everyone and people know your business before you do. I didn’t want people to be offended when I wrote the story, but unfortunately that wasn’t the case as I’ve had a few people from school (we left school 9 years ago) asking why I’ve written about them. I haven’t written about them, and I hope people don’t throw stones at me when I drop my daughter off to her grandparents (who live in the Valleys) next.

At what point do you feel a piece of writing is finished, if ever?

I don’t ever feel a piece of writing is finished. When you finish writing for the day, you may be happy but go back to it a few days later and you’ll feel so disgusted by what you’ve written it’s like stepping bare-foot on a slug. I’d say finished writing is down to your editor, your agent and your publisher.

The short story is set in Wales – how important are your roots to your writing? Very important. I try to set as much of my writing as possible in the valleys or Cardiff. In my writing style, I feel it’s important to write about what you know rather than fabricating somewhere which you (probably) will not know that much about. My debut poetry collection, Amnesia, has a lot of poems set in the valleys, my experiences there, and growing up and growing away from the place I used to call home.

Do you ever use prompts to start writing, or do you wait for inspiration to strike?

Unless it’s a character/idea I’ve had in my head for a while, I never use prompts.

Do you find the label ‘Welsh writer’ beneficial or reductive?

This is an interesting question. The label ‘Welsh writer’ is something which has been used in a beneficial way for a long time. However, slowly the label has faded away (I feel) and instead people are using terms such as ‘a writer who sets their stories in Wales’ etc. I recently was invited to attend Hay Festival in the inaugural Writers at Work scheme and attended a talk by a person – who will remain nameless – who works at the Welsh Books Council and who used phrases such as ‘insufferably Welsh’ ‘suckling the teat of the British writing industry’ when referring to Welsh writers. This, of course, is extremely offensive as ‘Welsh writers’ have produced fantastic and influential writing over the years which has not only influenced writers in Wales, but writers worldwide, too. I don’t mind being labelled a Welsh writer, as that is exactly what I am. A writer, who is Welsh, who sets his stories in Wales. I don’t see anything wrong with that. I see the current throng of Welsh writers as being possibly one of the strongest and diverse collectives in the British industry – and I’m proud to be part of that. As far as us being ‘insufferably Welsh’, long may that continue if the current level of writing is going to continue, and be exceeded by those in the future.

What can you tell us of the projects you have lined up for the future?

I’m currently writing my second poetry collection, focussing more on nature and the modern environment which surrounds it (the west of Wales to be exact). I’m also including more personal tribulations and experiences, but comparing those with the evolution or de-evolution of nature (whichever your mindset may be). I have also recently sent my debut novel to publishers, so let’s see how that goes.

Finally, what advice would you give aspiring writers?

Rhys Milsom has a BA in Creative Writing from the University of South Wales and a MA in Creative Writing from the University of Wales: Trinity Saint David. His fiction and poetry has been widely published, including Wales Arts Review, Litro Magazine, The Lonely Crowd and The Lampeter Review, amongst others. His debut poetry collection, Amnesia, is published by Onion Custard Publishing Rhys runs a quarterly literature and art night called Milieu. Rhys lives in Cardiff with his partner and daughter, Ivy. He is the recipient of one of TSS’s Writing Awards and his short story ‘The Hooey of Ray Bubble’ can be read here.