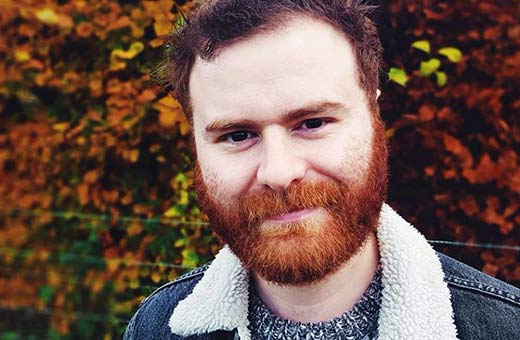 When did you begin writing and what draws you to the craft?

I always wrote as a child. It was my dream to be a writer, as the cliché goes, but I stopped. I worked in retail management, and had always wanted to study English literature and creative writing, and one day I thought ‘I can’t continue like this’. I loved the people I worked with, but hated the job, and needed to do something. I quit my job, and never looked back.

The need to tell stories is what draws me to writing and, of course, reading. I can’t think of any writer who doesn’t enjoy telling stories – it’s what we do.

You’ve studied creative writing and also work for the National Flash Fiction Day project – how have these experiences shaped your writing and would you recommend them to other aspiring writers?

Without either experience I wouldn’t have been a writer.

Studying creative writing has exposed me to flash and short stories and, as a result, National Flash Fiction Day. The 2014 anthology Eating My Words included my first ever publication, and have been involved with the project for just over a year now. It’s an invigorating experience. I get to work with the master of flash, Calum Kerr, and many more passionate writers dedicated to bringing the competition, the annual anthology, and the events to life.

I’d recommend both experiences to other aspiring writers, especially getting out there and finding projects like National Flash Fiction Day to get involved with. Most events or projects like this rely on time, energy, and commitment from volunteers who do it all purely for the love of writing and live literature, and only by people getting involved can these things continue to happen.

Where did the inspiration for the short story ‘Some Place New’ originally come from?

I started university because I wanted a new start in life. I had my backstory, and it occurred to me everyone else had their own story. You never know what’s really going on in someone’s life, and I wanted to explore a character who was coming to university for their own new start.

Depression is invisible. I know someone who described depression to me as something that always followed them around, no matter what they did, and I wanted to try and manifest this idea physically. This is where I had the idea for the spider following Trent; I don’t like spiders, and they always seem to find me.

What was the editing process with TSS like and has this changed your approach to writing in any way?

Most of the time, I prefer editing my writing over the initial writing of it. I find during revisions of my work the real story emerges, and I’ve always been open to feedback and suggestions. I don’t understand writers who aren’t – it’s how you grow and develop.

The process has strengthened my writing, but I have always been open to feedback. I’m the type of person who likes to be told where the weaknesses are. Only in this way can I become a better storyteller and, as a result, tell better stories.

You’ve previously written plenty of flash fiction with a more recent turn to short stories – what would you say are the greatest differences between the two forms and does this affect your writing process?

This is difficult for me to answer because everything I thought I knew about writing fiction longer than flash has changed as a result of writing ‘Some Place New’.

I feel for me personally the greatest difference between the two forms is the story I want to tell. Some stories don’t require many words. I think it depends on the character; Trent’s story emerged with many more aspects I wanted to explore than some of the characters featured in my flash fiction.

Which authors have most inspired you?

Tania Hershman. She introduced me to flash fiction during a reading at Bath Spa University from her collection My Mother Was an Upright Piano and I have been in love with flash ever since.

David Gaffney. If I could write flash half as good as him I’d be very happy.

Calum Kerr. The amount of dedication he has for flash is unrivalled and his many collections demonstrate how much you can do with flash.

And of course, poets too.

Even if a writer favours one particular form over another, I feel you need to engage with all types of literature to really grow.

Lastly, what future projects do you have in the pipeline?

I’m also currently working on a novel, and this is a definite example of what I said about a character (or characters) who keep saying ‘but then this happened’. I can’t shut any of these characters up…

Right now, I’m working with the amazing people at National Flash Fiction Day to start planning this year’s event, and I’m looking forward to the plans we have for this year!

I’m also towards the end of my undergraduate degree, and I’m working out what the next step for me is. I love learning, so I would love to continue studying.

Santino Prinzi is currently a third year English Literature with Creative Writing undergrad at Bath Spa University. Since 2015 he’s helped with National Flash Fiction Day (NFFD) & he was awarded the 2014/15 Bath Spa University Flash Prize in July of the same year. His flash and prose poetry has been published or is forthcoming in Litro Online, Flash Frontier, CHEAP POP, Ink Sweat and Tears, the 2014 and 2015 NFFD UK anthologies, Unbroken Literary Journal, and was selected for The Best of Vine Leaves Journal 2015. Fin him onTwitter @tinoprinzi and more information is available on his website here.  His commissioned short story for TSS, ‘Some Place New’ can be read here.