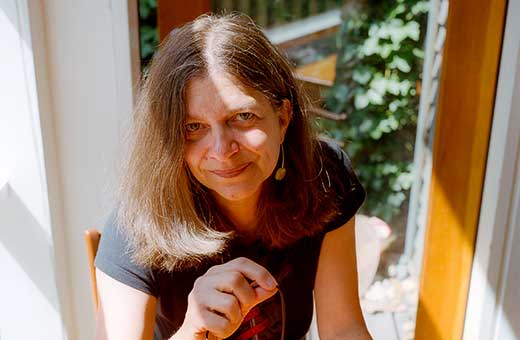 You’ve had great success and won awards in journalism and as a short story writer. Do you feel your background in journalism informs your fiction?

Absolutely. If I hadn’t had a writing apprenticeship in journalism (newspapers, TV current affairs, and magazine writing) I would have written very different stories (more insular, less engaged with the outside world, probably much less cynical and more sentimental) than I do, plus I would have a much thinner skin and feel flayed every time anyone suggested changing or cutting a single word. By the time I had any fiction edited I was used to the ruthless back and forth that goes on between a writer and editor due to space restrictions. Literary editors are of a much kinder and gentler sort in my experience.

Many of your short stories take a quirk/facet of modern life/society and push it to absurdity, providing thought-provoking insight. Social commentary risks potential adverse response. Have there ever been topics you weren’t willing to explore?

There are ideas I’ve had for stories that I’ve had to deep six or put on more or less permanent hold due to experiences friends and family have had. I’ll give you an example. A long while back I started working on a story called ‘The Sperm Donor’s Children’ which took on artificial insemination from the angle of men getting paid for donating sperm. I got the idea during a dinner party when one of the guests, an obnoxious “humour writer” type jawed on about having donated sperm a billion times so he could get a funny story out of it (plus needed the $$). I was so repulsed by this and thought, “What about the future biological spawn of this cretin?” This gave birth to the idea of a story about the 100 off-spring of a guy like this, a few of whom end up together (as in, you know, together!!) and they all finally meet at his funeral.

But then a number of people I knew, including close friends who are a lesbian couple, were going to these fertility clinics and using the donated sperm, so . . .well. Then fast-forward several years, and I thought: maybe I should re-visit the idea? But like all good ideas, if you sit on them too long someone else will come up with the same thing (one thousand monkeys in front of one thousand typewriters). A few years ago a Canadian movie called “Starbuck” came out about a guy who fathered 533 children through sperm donations and a whole bunch of them have launched a class action suit to force the fertility clinic to reveal his identity. I couldn’t bear to go see it.

I write dark social satire and in our increasingly politically-correct, over-sensitive world, something will always deeply offend somebody. I thought the PC thing had ended with the eighties but the current rendition (PC 2.0) is even more furious, with the focus on identity politics. (Viz: The reaction to Lionel Shriver’s speech in Australia – for the curious, I’m Team Shriver). 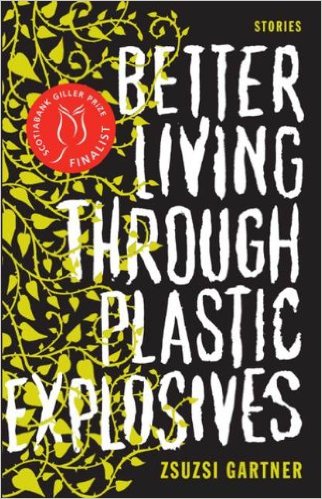 Although Better Living Through Plastic Explosives was published in 2011, one story seems to have great foresight: ‘Once, We Were Swedes’. In the current climate of ‘fake news’ and ‘alternative facts’ would you write it any differently today?

The only difference would be some pointed digs about the current situation and U.S. administration. In the story, Alex (a former foreign correspondent with PTSD) teaches a first-year community-college course in journalism and all her students want to express their opinions rather than research and report facts. This was based on actual experience I had teaching a course exactly like the one in the story ALMOST 20 YEARS AGO. Now, like then, I strongly believe opinions ought to be earned. Now they masquerade as fact. But that’s just my opinion. Ha.

I know of one UK outlet that uses epigraphs as a criterion for rejection. In your collection Better Living Through Plastic Explosives four of the stories have clever epigraphs. When, why and how do you use epigraphs?

That’s kind of a ridiculous “rule.” Probably the peccadillo of one particular eccentric editor. That said, epigraphs can be over-used and when they’re relied on to do the heavy lifting for a story (that is, shedding light on something the story itself doesn’t manage to, or explaining the story, like some bad titles do as well) then I usually advise writers to take them off. Also, I hate epigraphs that are common-place and/or clichéd, as if they’ve been plucked from Bartlett’s Quotations or unearthed during a 10-second Google search. They should complement the material; exist in conversation with the story. For example, in my story ‘They Are Killing all the Great Motivational Speakers of Amerika’ there are three epigraphs and one of them is an invented one, quoting one of the characters in the story itself.

So four out of nine stories in Better Living have epigraphs, it if were 8 or 9, I would say that was excessive. Your man/woman at the “UK outlet” thinks even one is excessive, and that’s his or her prerogative as an editor. Personally, if I start reading a submission that opens with a cow standing in a field flicking its tail at flies or a woman pouring a cup of tea I can’t toss it aside quickly enough!

I really don’t know – things just come to me. Although for ‘We Come in Peace’, a story about five celestial entities inhabiting the bodies of five Vancouver teenagers there were so many characters, plus each of the five main characters had two different names, that I had to come up with something so the reader wouldn’t get confused before they fully entered the spirit of the story. I was reading Dr. Zhivago at the time, one of those crazy Russian novels in which characters have three or even four radically different names depending on who’s addressing them, so that I had to keep flipping to the front to the name glossary. This gave me the idea of appending a “Dramatis Personae” to the beginning of my story. 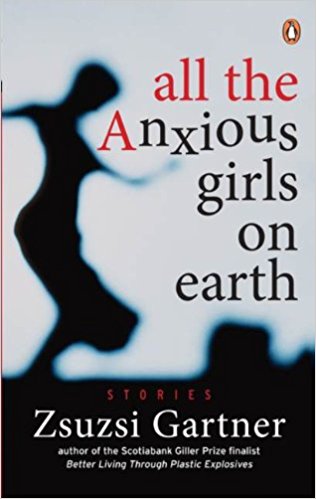 You’ve taught fiction on both sides of the Atlantic. Have you noted any common differences in approach to short story writing?

Writers are influenced by what they read. So the more widely read emerging writers, especially those reading a variety of contemporary work not just from their own country, are usually those who are producing the most interesting work of their own. I found no differences in this respect on either side of the pond. My job, first and foremost, is to enlarge emerging short-story writers’ sense of possibilities – to widen their stylistic horizons so that they have a series of those illuminated light -bulb moments: “You mean you can do THAT?!”

Content-wise, though, I found the differences between Canadian and Irish writers striking. Many more the Irish writers I worked with wrote about extended family, and the traditions and oppressions of Catholicism permeated much of the work. This is analogous to French-Canadian writing in Canada, but not so much to the Anglophone experience.

Considering other writers, who inspires you and what do you admire about their work?

I have a long list of ever-shifting influences depending on what stage of my writing life I’m thinking about. Very early on: Kurt Vonnegut, Tom Robbins, and Dostoyevsky. During the 1990s and the oughts I was deeply influenced by Lorrie Moore, George Saunders, Rick Moody, and David Foster Wallace, all writers who take a version of our fraught contemporary world, make us laugh at its grotesqueries, and then break our hearts. This is what I aspire to. The darkly tragic-comic. So that’s a duality and a delicate balancing act. At the craft level, I go back over pages again and again, layering things in that I think are needed to keep or develop these tensions. Most recently I’ve been envying Chuck Palahniuk after reading Fight Club and Anakana Schofield for Martin John – such indelibly strong voices and fearlessness, and such use of white space and compression and moving around deftly in time! Often what influences me writing-wise and books I’ve adored reading exist on opposite ends of the spectrum. I absolutely loved the Elena Ferrante quartet, I was obsessively absorbed for months, but in my own writing I don’t aspire to lengthy volumes of realism.

Dear Aspiring Writers: Read, read more, think about why you want to write the things you write, read, read, write sentences, loads of sentences, read some more, think about how you want to write the things you write, read, read & read more, take writing and the world seriously, don’t take yourself too seriously, don’t be precious, and read some more. Eat yummy food, drink modestly (at times immodestly), have fun, listen to your children and your letter carrier, read some more. Take up piano or tap dancing or medieval sword fighting. Learn to make pizza on the BBQ. Read YA steam punk and graphic novels. Read the newspaper. Don’t fret about genre divisions. Don’t worry about whether it’s too weird. Enjoy fruitful emotions like anger and guilt. Don’t worry about whether your mother will like it. Throw out more of your writing than you keep (20X more, 50X more). Someday you may have a book. Xox, ZZ

What are you currently working on and/or what’s in the pipeline?

I’ve been working on a book project for almost five years (and hopefully will have a mss in late spring) that lets me have my cake and eat it too. The Beguiling: a novel in confessions is novel, but each chapter also contains an embedded short story. Think St. Augustine’s The Confessions crossed with The Canterbury Tales and add a sprinkling of Scheherazade but set in the 20th and 21st century.

Zsuzsi Gartner is the author of the acclaimed story collection All the Anxious Girls on Earth, editor of the bestselling anthology Darwin’s Bastards: Astounding Tales from Tomorrow, and former creative director of Vancouver Review’s  Blueprint BC fiction Series. Her 2011 collection, Better Living Through Plastic Explosives, was a Scotiabank Giller Prize finalist. A former journalist (newspapers, television and magazines), she has won several National Magazine Awards, most recently for fiction in 2016. Her fiction has been widely anthologized and broadcast on CBC and NPR. Zsuzsi taught MFA students for eight years at the University of BC, and has mentored award-winning writers through the Banff Centre. During 2012/13 she experimented with living analog in a digital world. Based in Vancouver, she is the founder and director of Writers Adventure Camp in Whistler, BC, and was the inaugural Frank O’Connor International Short Story Fellow for the City of Cork, Ireland, in 2016.