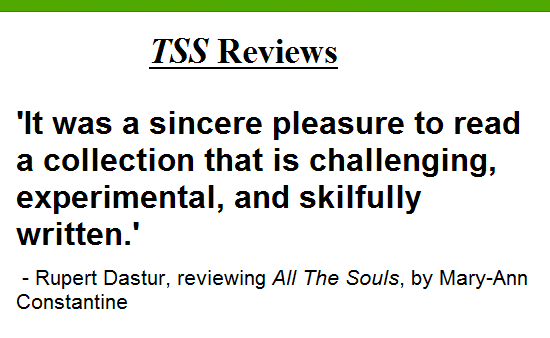 The Short Story Review: ‘All the Souls’ by Mary-Ann Constantine

All The Souls, by Mary-Ann Constantine is an unusually, but pleasurably, thematically-unified short story collection that stretches the form, unashamedly rejects simplicity, and leaves the reader mulling the ghostly overlap of past and present.

The subtitle of the book ‘Stories of the living and the dead’ usefully points to the major theme running through the pages, with a number of ghosts haunting the eleven titles in the collection. This sometimes macabre preoccupation is further navigated through ideas of memory, history, landscape, and objects. War, photography, and religion also feature significantly. The effect of these recurring concerns creates a mixed, powerful mood that echoes and amplifies between the reader and narrative as we travel through the textual terrains which are variously sad, frightening, appalling, witty, and poignant.

Interestingly, the collection opens with a novella – about half the length of the book – at just over sixty pages. Titled ‘The Collectors’, this story charts the journey of two doctors and a folklorist as they travel through Brittany in 1892 (not 1898 as the blurb suggests) gathering evidence of leprosy in the region. Constantine expertly crafts her characters: the adoring disciple Aubry and the efficient surgeon ‘Z’, whose scientific zeal contrasts brilliantly with the kinder, more romantic, more literary ‘Le Coadic’.

Threaded through this story of disease, delirium, amputation, death, and (possibly) deliverance, sits the surprisingly conversational musings of a spirit, one of the anaon (a population of penitential souls) ‘a poor sinner’ bound ‘five hundred years and counting in an oak that refuses to die a natural death’. These interludes are (particularly at the beginning) a little obscure, but masterfully combine the tragic with the comic. Take, for example, the narrator’s taxonomy of the drowned: the list for those drowned in rivers includes people ‘fooling around’ while those drowned in ‘ponds, wells or ditches’ comprise ‘the murdered, especially newborns, you’d be surprised how many.’ Couched in such chatty, familiar diction, this horrific detail is made disturbingly mundane; death and brutality turned innocuously quotidian.

Both theme and tone of these anaon chapters interact intriguingly with the corresponding narrative of the three men which is more plot-driven and dramatic, amply displaying the writer’s careful attention to structure – a skill which is increasingly admirable as the novella progresses.

Although I would have cut the grating repetition of Z’s idiosyncratic, too-frequent use of ‘mon ami’ and some translations at the back of the book for the non-English phrases would have been a benefit, Constantine blends her research with the fiction extremely well. ‘The Collectors’ also demonstrates that while her prose isn’t densely poetic and not all the similes quite work (a minor fault, but worth noting), her dialogue is superb, as are her character portraits, the sudden injections of spectacle, and the unexpected details. Equally impressive is the lovely rhythm that several of the passages maintain. For example:

‘Down to where the alders start to close in, and how heartily sick he is now of the traditional sunken lane with its branches clasped in prayer blocking out the sky. Down to where no habitation could ever be because even the trees here are ankle deep in water that glimmers when it gets any light to glimmer by. Down, then, to the edge of the dark pool, where willow and alder crowd and tangle thousands of branches hung with millions of souls.’

‘The Collectors’ continually surprises; aside from the intelligent writing, this is due to the need for a reasonable level of cognation on the reader’s part; many things are left unsaid, with numerous hints and hooks only gradually receiving illumination. If the effort is made, the story is both highly rewarding and enjoyable. Simply put, the novella alone makes All the Souls worthy of purchase.

Happily, the merits of All the Souls continues in the proceeding ten short stories. The major difference is that the majority are set in the present day and intriguingly blend contemporary life with supernatural occurrences. Often, this is done in an unassuming way, rendering the extraordinary, ordinary.

‘Camera Obscura’ provides more ghostly romance, with an academic being followed in a bizarrely unthreatening way by a spirit always dressed in ‘the same clothes, dark with a red scarf, even when it’s warm.’ The unassuming description fits nicely with the endearing narrator who states:

‘I don’t mind him being here, though I am surprised. I thought that ghosts needed places, and assumed that his place was Aber. Him being here suggests, as had begun to suspect, that he needs me more than he needs the place.’

This interaction between the living and the dead occurs most directly in ‘Lancaut’ and ‘Lake Story’. The former is one of my favourite short stories in the collection. It centres on a moody, but rambunctious, drinking man undergoing a divorce, who chances upon a mysterious monk:

‘I gradually, fuzzily, realised that my friend probably didn’t work for the Lancaut Trust after all. An obsessive, then, an enthusiast. A looney in my living room. Oh what the hell, I thought. Who am I to judge. I like him.’

It is with this energetic, appealing, amusing tone that that the story progresses. Beneath the humour, however, there is a terrible desolation that simmers almost undetectable until the final few pages. The last paragraph of the story really is beautifully written and after reading it I had to shut the book for some time before I could turn to the next story. I would quote from the text, if I didn’t feel that the preceding narrative was essential for the full impact of the conclusion.

‘Lake Story’ also involves a conversation with the dead. Like ‘Lancaut’ it too utilises humour, with one line quirky enough to provoke laughter:

‘Even in death, she says enigmatically, there is cake.’

This last short story is well-placed within the collection, bringing together several leitmotifs spread throughout the other stories – life, death, memories, locations, perspectives, generations – not to mention the welding of tones and rhythms, all of which would require several hundred more words to sufficiently convey.

Indeed, there is almost too much to say about these short stories in a review. One thing, though, should be clear: it was a sincere pleasure to read a collection that is challenging, experimental, and skilfully written. Mary-Ann Constantine should be congratulated and so too the editors of the publishing house, Seren, who have impressed once again.

Rupert Dastur is a writer, reviewer, and editor. He studied English at Emmanuel College, Cambridge, where he specialised in Modernism and the Short Story, leading to the creation of TSS with the aim of furthering discussion, interest, and development of the form. He has supported several short story projects and anthologies, is the Head of Development at Khona Productions, and is currently developing the editing and writing platfrom Chapter Checkers.