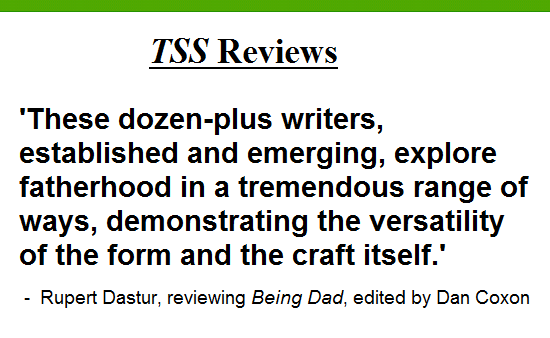 The Short Story Review: ‘Being Dad’ edited by Dan Coxon

There has been a great deal of anticipation for the Being Dad anthology, edited by Dan Coxon. Rightly so. After a successful Kickstarter, we are presented with an equally fruitful short story collection. Basting an impressive pedigree, Being Dad sizzles with creative skill; there are several readily recognizable names among the fifteen contributors, including Dan Powell, Toby Litt, Courttia Newland, Nikesh Shukla, and Rodge Glass to name just a few.

These dozen-plus writers, established and emerging, explore fatherhood in a tremendous range of ways, demonstrating the versatility of the form and the craft itself. Each author give a different slant on the subject of ‘being Dad’, though some commonalities do emerge: we’re shown the comic naughtiness of children, overprotective fathers, sleepless fathers, love, pride, irritation, disappointment, and even madness. Inevitably, there is also the due dose of loss/death; for seasoned short story readers this may cause a sigh or two, but take heart: the subject is well-mastered and pleasingly juxtaposes the vitality of the babies, children and teenagers that gurgle, chuckle, scream, and shout across these two-hundred pages.

If you’re a ‘TL;DR’ busy-body, suffice yourself with the above and go and buy the book. If, however, you’re intrigued to read more, be warned this is a very long review. It’s not often that short story anthology reviews bother to mention every single author – this one does.

The opening short story, ‘A Father’s Arms’, by Dan Powell opens – in a literal manner – sharply:

Jabs. Baby Anna’s first. Not mine. Already been through this twice before with the boys. Old hand by now. A slab-faced nurse hurried us into a cluttered exam room.

These opening lines are fantastic – the style matching the subject; the scene, tone, and early confrontation so swiftly brought into play. Throughout the story the pace is pushed on by the narrator and the writer weaves a world that combines the sad, the humorous, and the ghostly. Most impressively, Powell effectively jumps his narrative across time periods, going back and forth; this experimentation with the chronology was refreshing and daring. He should be applauded on this excellent work which, according to my notes, ‘leaves you wanting to hug your Dad, wherever he is.’

The next short story, ‘Paddy & K’Den’ throws another heavyweight punch. Toby Litt’s offering is intense, brutal, and lurches in an almost sickeningly swift manner from the hilarious to the serious, as a child’s prank goes awry. The direct, vulgar language strips away any niceties:

They [toy figurines] had been placed, instead, he now saw, into a meaningful positions of sex. The green plastic soldier, with no head, appeared to be fucking a goofily smiling pink-haired troll up the arse.

The professor, at the centre of this drama, is oblivious to the plastic pantomime until a university student complains and the Dean gets involved – the kind of Dean that says ‘Weird is subjective’. The fury and frustration, combined with a carful tip-toeing around his son in the hope of an absolving confession (‘Paddy tried to be loving towards Max, and not angry’), makes an entertaining, teeth-clenching read.

Litt’s short story also skirts some interesting subjects on race and social contexts, showing the father’s concern over his son’s future and a desire for him to avoid becoming ‘Faux-black’ as he mixes with boys like K’Den whose culture,

seemed to be based around preening little toerags, plucked eyebrows and affectedly shaved heads, who told you it was okay to use and abuse bitches and ho’s

The brusquest short story, ‘Paddy & K’Den’ is a joyous read with what is, arguably, the strongest plot-pushing personaity within the collection.

After two structurally experimental and the plot-driven short stories, we’re presented with a more mood-oriented, poetic display. ‘Sound Boys’ by Courttia Newland is like a giant play-pit of words, happily, flowingly, rhythmically brought together; a world in which syllables slip and slide off tongues. This is the description of the father:

And him; the smiling, skanking, slow bouncing, smoke-trailing, sweet-rum smelling, always ready to ramp figure of a man alongside his nocturnal alter ego.

There’s a few satisfying twists, but for me this short story is about the music of the words and the world evoked through the rhythms. It was reminiscent, in some ways, to Toni Morrison’s book Jazz which stylized to the point of being sensual. Newland’s short story can be further singled out for viewing the subject of fatherhood from the unrelenting first person perspective of the child. I also appreciated the unusual, but immersive address to the reader: if anyone has information, I’d be grateful if they passed it on.

R.J. Price pens a puzzling piece set in an unexpected place and populated with even stranger figures. The story provides a glimpse at a father whose methods of upbringing are far from conventional. The most ambiguous of the short stories, Price’s work ‘Balance and Versatility’ leaves one feeling, on the contrary, quite unsteady.

This dip into more sinister psyches is looked at in greater detail by Richard V. Hirst’s ‘=VLOOKUP’ and Richard W. Strachan’s ‘Apple’. Both narratives involve Dads struggling to cope with the difficulty of fatherhood combined with additional external pressures – all of which bring these characters to the edge of insanity. Slowly increasing the tension as the paragraphs slip past, Hirst and Strachan demonstrate a mastery of the edge-of-seat suspense story.

My notes, made while reading these two short stories, throw out a revealing list of adjectives: clever, odd, fantastic, sinister, depressing, horrible. If anything can elicit such an emphatic response, it’s worth a look. If you’re not getting up to grab the nearest copy of Being Dad, what are you waiting for?

‘The Call’ by Tim Skyes features early mornings, sleepless walks, a family of foxes, and a drunkard. At the beginning of the short story, the alcoholic acts almost prophetically like some kind of sage, or perhaps – more fittingly given the title, a Greek Chorus:

‘Man born shelterless,’ he said. ‘Nature hostile.’ He gestured at T with the baby in the sling. ‘Father gives up all strength to child. Child prospers, father weakens, dies.’

The writing, like the names, are pared right back, to the extent it requires applied attention to follow. It almost has the brief, moment-leaping texture of flash-fiction. The effect is mildly disorienting and makes for an interesting parallel with the mind’s workings when suffering from sleep deprivation – everything distilled down to essences and necessities.

Evidently, the editor was aware of the need for a bright interlude. The careful ordering of short stories within a collection or anthology is often glossed over in reviews, but Coxon has clealry given significant and sensible consideration to the order in Being Dad. There is an enjoyable flow to the anthology as the highs and lows are carefully guided.

While I would question his sentiment in the introduction that ‘the fact that all fifteen of these writers are also fathers only makes these tales all the more immediate and relevant,’ there’s no doubt he’s done a superb job in bringing this project into being and with such humility – his name doesn’t appear at all on the dust jacket and only twice in the anthology.

Rodge Glass and Nikesh Shukla contribute the least plot-driven short stories. They are interior, intimate, intricate, and like a one-sided conversations. The former, ‘The Jim Hangovers’ (Glass) is addressed to the reader, the other ‘The Dandhiyas’ directed at a sleeping daughter. Where the one contemplates change, the other laments it.

I had the pleasure of meeting Rodge Glass at Scotland’s creative writing centre, Moniack Mhor (a beautiful location with friendly people, if anyone’s interested in creative writing courses) and he was an excellent tutor. ‘The Jim Hangovers’ amply reflect why (I‘m talking about the writing here, not the drinking – though there was plenty of that too…). In one paragraph Glass displays the pensive protagonist with perfect pathos:

Not everything needs to last to be worth something. The band doesn’t have to stick together until everyone dies, the songs can’t be unwritten. If they were great songs once, they’ll be great songs forever, regardless of anyone’s playing them.

Shukla was at The London Short Story Festival last year in which he spoke about comedy as a way of discussing difficult topics; given his stage career, his writing is unsurprisingly direct. The protagonist in his short story talks about issues of race, culture, and appropriation. Sometimes it feels like the crowbar is being used, but when you realize you’ve unwittingly done some of the things under discussion, you become aware of its needs. What’s more, towards the end of the story Shukla rather nicely reveals the crowbar is in fact inflatable, though the message still stands.

In several of these family-oriented short stories, loss and death play significant roles. For two of the stories, ‘In the Marshes’ (Iain Robinson) and ‘Nothing Else Matters’ (Nicholas Royle) these themes are particularly pertinent. Both short stories take a fairly traditional approach to story-telling, but maintain their masterful control with the occasional flourish as with Robinson’s lovely line ‘his daughters were both inconceivable and startling in their presence’.

I was impressed with Royle’s striking and retrospectively significant opening:

Take your glasses off to wipe your eyes and everything in the distance loses definition. What si that down there? Right at the end. A snooker table? It looks a lot like one.

Without resorting to a tiresome twist, ‘Nothing Else Matters’ ends well, reshaping the entire five-page story.

From death to divorce. Two of the final three short stories navigate the difficulties of separation. ‘Bird-Tables for Swans’ by Lander Hawes provides a portrait of the rich man who loses everything, but still fails to amend his narcissism and unpleasantly critical gaze:

Jenny looked at me as if I was a traffic warden ticketing her for waiting outside a school with the engine running. I thought she needed to apply some foundation and eye make-up, considering her age and the freezing weather.

Meanwhile, Andrew McDonnell’s short story ‘Breakfast by the Motorway’ lends and almost Larkin-esq lens to his description, penetrating the tragedy and comedy found in the everyday:

The final text ‘What Was Left’ by Saul Wight evens out the tensions and themes in the collection with a short story that doles out humour and its opposite, combining the sentimental with the matter-of-fact, the lyrical and the direct. Perhaps most importantly, there is also a hint of redemption with the final sentence gently returning to an oft-suggested point: your very existence, in some ways, connects you to your father – whoever he is and wherever he is. Everyone has a father or at least the idea of one, and as such we can all relate and learn from these short stories.

Being Dad is a marvellous medley of voices on the subject of fatherhood and everyone involved in the project should be proud of the result.

Rupert Dastur is a writer, reviewer, and editor. He studied English at Emmanuel College, Cambridge, where he specialised in Modernism and the Short Story, leading to the creation of TSS with the aim of furthering discussion, interest, and development of the form. He has supported several short story projects and anthologies, is the Head of Development at Khona Productions, and is building the writing, editing, and publishing platform Chapter Checkers.