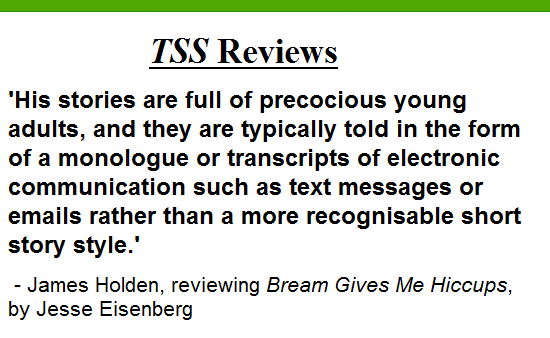 Bream Gives Me Hiccups is the first collection from Social Network actor Jesse Eisenberg, who has previously written pieces for McSweeny’s and New Yorker. Some of those are included in this book, which is made up not just of stories, but pieces of humorous writing such as ‘Manageable Tongue Twisters’ (‘How much lumber could a woodchuck discard, if a woodchuck could discard lumber?’) There are lots of laugh out loud moments across this book which is solid enough to make it worthwhile reading.

The book is organised into nine different thematic sections, including dating, sports and family, the best of which is the series of stories that form the section ‘Bream Gives Me Hiccups’. These are a series of ‘restaurant reviews by a privileged nine year old’. Most of the restaurants are the choice of his mother, but we also get to read about ‘Robert Frost Elementary School Cafeteria’ and ‘Matthew’s House.’

The central character in the stories is not the unnamed narrator but the neglectful Mom, whose presence looms large throughout. She insists on eating in fashionable restaurants that serve food she doesn’t like in order to impress a book club that she doesn’t seem bothered about:

I don’t know why Mom is even in the book club, because she doesn’t read any of the books and, on the nights before the book club meetings at our house, she say “fuck” a lot and asks me to look on Wikipedia. Then I have to read the synopsis and major characters to her while she vacuums.

Eisenberg uses the structure to give us glimpses of other areas of the reviewer’s life, including ‘Dad’s New Family’, ‘Robert Frost Elementary School Cafeteria’ and dinner at the house of his best friend, Matthew. The whole thing culminates in a trip to as Ashram with his mother:

When we first arrived at the ashram, I knew we probably wouldn’t last the whole weekend. There was a sign at the front entrance that said, REPEAL YOUR VANITY, RELEASE YOUR POSSESSIONS, RELEARN TO LIVE. I knew Mom would not want to do any of these three things. We had just spent the whole week shopping for sexy yoga outfits for Mom to wear at the ashram and she was definitely not planning on repealing or releasing any of these.

Each of the stories ends with some kind of philosophical musing on life before he awards the venue a star rating out of 2,000, which are often as much a reflection of his company or musings on life as they are about the quality of food he has consumed. Eisenberg fully exploits the well-drawn characters to great sentimental and comic effect.

Elsewhere his stories are full of precocious young adults, and they are typically told in the form of a monologue or transcripts of electronic communication such as text messages or emails rather than a more recognisable short story style. A lots of the stories are driven by form, like ‘My Prescription Information Pamphlets As Written By My Father’, or ‘My Nephew Has Some Questions’ in which “why” is repeated over and over. This is not to say that the short stories are style over substance, although ‘My Roommate Stole My Ramen: Letters From a Frustrated Freshman’ has its readability seriously compromised by the sheer number of footnotes it contains.

The best of these electronic exchanges is ‘An Email Exchange With My First Girlfriend, Which At A Certain Point Is Taken over by my older sister, a college student studying the Bosnian Genocide’, which pretty much does what it says on the tin. This does not stop it being exceptionally funny as the story shifts gears from a conventional argument between teenage lovers into something much more enriching as the older sister seeks to draw allusions between the lovers tiff and the Yugoslavian civil war which the girlfriend fully participates in. (‘Clearly my brother is Bosnian leader Alija Izetbegovic, stuck in the dark while his fate is decided in private backroom deals by others…’).

Eisenberg has a talent for working his story titles hard, often taking a ‘Ron Seal’ approach that provides the set up to the story. For example, ‘Alexander Graham Bell’s First Five Phone Calls’, sees the inventor drunk dialling and sliding into depression at his failure to connect with who he wants, or ‘A Short Story Written With Thought to Text Technology’, which sees thoughts about a barista intrude into the more conventional narrative being produced.

There is a lot of intelligent humour, satire and social commentary here. Eisenberg knows how to set up a punchline, and he hits his target nearly every time. In the acknowledgements to the book, Eisenberg thanks his editor at McSweeney’s for ‘encouraging me to value brevity’. But the stories here work best when the characters are allowed to become more than a punchline, and to breathe and develop into something much deeper, as happens in the title sequence.