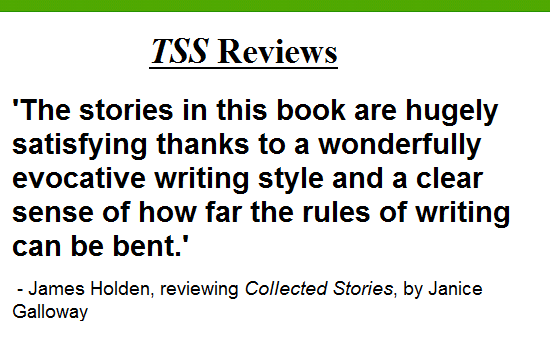 First published in 2009, Collected Stories brings together the first two volumes of short fiction written by the Scottish writer Janice Galloway – 1991’s Blood and 1996’s Where You Find It (a third collection, Jellyfish, came out in 2015). Whilst the subject matter may often appear to be downbeat and mundane, the stories in this book are hugely satisfying thanks to a wonderfully evocative writing style and a clear sense of how far the rules of writing can be bent.

It is this decision to ignore the forms and conventions which traditionally govern writing that is initially the most striking thing about Galloway’s writing. Paragraphs are not indented when you would expect them to be, and half of the story titles aren’t capitalised. Speech, when it occurs (there’s not much dialogue in these stories) is not marked by inverted commas. Instead Galloway either writes it directly into the text without quotation marks, or denoting it by putting dialogue into block capital. In ‘Plastering the Cracks’, an exchange between a homeowner and a builder she has employed, but struggles to understand, looks like this:

At 4.30, a muffled shout hurled up the lobby and the bobble hat pushed round the door.

SUZ SUZ THIDAY
He filled his lungs heavily several times while I said nothing.
BACK IN THIMORRA OKAY
SOAKAY HEN
he insisted as I tried to get up, a good natured dismissal as he saw himself out. Irritation at my own cluelessness hung on through the diminishing sound of feet.

Galloway is far from the first writer to do this, and many, many short story writers, and novelists down the years have played about with these rules: Donald Barthelme is the author who most springs to my mind. She occasionally plays with what white space, indenting and line or page breaks can do to the flow and feel of a story, and in ‘last thing’ Galloway doesn’t even use punctuation over the course of the five page story.

This willingness to be bold with form is also shown in the five stories that were scattered throughout Blood called ‘Scenes From The Life No. …’ which merge the formatting and conventions of short fiction and drama. Dialogue is presented like it would be in a script. Each of the stories effectively opens with scene setting, and action is often presented like a stage direction. In ‘Scenes From The Life No. 27: Living In’ she even provides extensive notes for how an actor should play a particular role: ‘The steady but eager blankness of TONY’s face throughout is essential to a correct interpretation of the character. Never slip from character or acknowledge the audience in any way.’

By and large, though, Galloway’s stories run along on alternative rules, primarily for paragraph indention and ways of marking speech, that are consistently deployed across both collections of stories reprinted in this book.

The overall impact of this is to inject realism and intimacy into her writing. Tying the rejection of some of grammar’s formal conventions with narration that is predominantly in the first person allows us look with a keener eye at how the world looks, feels, smells and sounds and places us close to the protagonists. Galloway’s strongest talent lies in her description – something which makes this book a real pleasure to read and sets her writing apart from many of her contemporaries. Her short stories are like a master class in finding small details that render a realistic setting or momentum, and shows what finding a non-clichéd way of recounting that detail can achieve. A needle on a finished record has a ‘seasick bounce’; an old woman’s ‘neck droops over quite hypothetical breasts’, wind means scaffolding is ‘whining like someone asleep, wrestling with dreams.’

This talent for description perhaps shines most brightly in the visceral ‘Blood’, about a schoolgirl’s visit to the dentist to have a tooth out, with its description of the dentist (‘the pores on the back of his fingers sprouted hairs, single black wires curling onto the bleached skin of the wrist’), the trip back to school (‘the smell of bacon rolls at the café fetched her nose coffee and chocolate. They spoiled when they reached her mouth, heaped up with sanitary towel and the blood still coming.’), and a trip to the music room when she got there (‘this piano had a nice tone, brittle and light. The other two made a fatter, fuzzier noise altogether’).

As in ‘Blood’, a lot of her stories focus on a single every-day event: a woman tidies the house ahead of her partner returning home on Valentine’s Day, someone goes to the hairdresser, a woman makes a hungover trip for last minute present shopping. There are often glimpses of bigger dilemmas to hand than the one focussed on in the narrative, helping to create a sense of fully formed and rounded characters, and this is backed up by occasional moments of high drama (an elderly couple enact a suicide pact), or magical realism (a girl’s hair won’t stop growing).

On the whole, though, these stories are grounded in a low-key reality. They also tend to be set during quite tight time frames, retelling one specific event rather than a longer narrative and often set over the course of a couple of hours. However, they are not so realistically drawn as to be painfully dull. Again, in Galloway’s hands the beauty of the description makes these short stories a real joy to read. She also manages to create sympathetic characters, and you root heavily for them, even when the stakes for them appear to be pretty small.

In some of the stories she also allows a dark or playful humour is occasionally allowed to shine through, increasingly so as we move from the ones originally published in Blood into those from Where You Find It. In ‘Love in a changing environment’, the sensuality of a bakery’s smells even affects lives of a couple who move into an upstairs flat:

‘Making love most often happened in the mornings, our bodies joined in a warm cloud of new-baked viennas and granary cobs from the shop beneath, the window hazy with hot chocolate croissants and our twin breaths. The scent of bread rising increased his thrust… His semen usually parted company with me by the time they were shaping Danish pastries.’

‘Love in a changing environment’ is just one of a number of truly outstanding pieces in this collection, sitting alongside ‘Blood’, ‘valentine’, ‘the proposal’ and ‘last thing’ as short stories that ought to be recognised as classics (‘last thing’ was included in Penguin’s recent Best British Short Stories curated by Philip Hensher). Most of the highlights here were first published in Where You Find It, whose stories appear to be a little better controlled, a touch more variety in the characters, plots that are a smidgeon more compelling. Ultimately, though, these are all carefully constructed and beautifully written short stories.