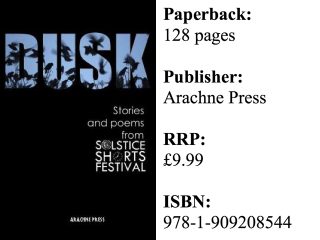 Dusk, a collection of eighteen stories and twenty-eight poems is the wonderful culmination of the 2017 Solstice Shorts Festival, which involved a host of live readings across the UK, from Aberdeen to Cornwall.

For the purposes of this review, I’ll be focusing on the short fiction – a gathering of flash fiction and short stories – that comprise a little over half the book as a whole.

As with most anthologies, the style and subject matter is diverse, but there remains – in keeping with the festival’s core theme – a strong undercurrent of the uncanny, a sense of things only half seen in the fading light. Mutability and metamorphosis are central to many of the pieces, as were, interestingly, dogs and wolves in their various guises.

The anthology opens with a short piece of around five hundred words – ‘MacFarquhar’s Bed’ by Alex Reece Abbott. Alex is a well-known writer in the short fiction world and this story exemplifies why – each sentence has a luxurious rhythm and sound that captures the sensuality, mystery, and danger of the wild outdoors. Strolling among the Cairngorms, the smuggler MacFarquhar observes the way

‘the bark of the beech trees trails silver, lichen beards. Their dark, wind-sculpted branches reach out for the sky, wild as the hair of Macbeth’s crones.’

A similar, literary, sentence-level care can be seen with a number of other stories which have a focus on the outdoors, including Lucy Grace’s flash fiction ‘Breadcrumbs’ which offers this beautiful early paragraph:

‘During the night a thick hoar frost had lain down to sleep outside. Creeping in the darkness, it had flowed silently over every external surface whilst they were closeted inside, a pale, immobilising lava.’

Overall, there were half a dozen or so shorter stories, most of which explored intimate, yet shifting relationships, including Kirsty Fox’s touching story, ‘They Said there were Pirates’, Cath Bore’s ‘The Dusk Runner’ that gives a tremendous sense of the way ‘time moves on and ruins everything’, Katerina Watson’s ‘Threshold’ that cleverly utilises short sentences and line breaks to give a sense of the tense hesitation of the central character, and the final prose story ‘Cape Cornwall’ by Jackie Taylor that provides a tantalising promise of what seems like a clandestine meeting at ‘dusk, tomorrow’ complete with the terrible uncertainty contained within the interpretation of the word dusk as both a specific time and symbol of change.

Between these tight, if near-bursting pieces, are a gathering of short stories which display an array of plots and peoples: from Sherry Morris’s sinister, soul-snatching faeries (Granda’s Plan), brutally chirpy, identity-sure bully-basher Alice (‘In-Between Dog’ by Pippa Gladhill), to the gods and goddesses of Math Jones’s ‘Yes Twilight’ and the shape-shifting lupine-warrior of Penny Piper’s blood-dripping text ‘Wolf’s Head’.

My favourite three short stories were ‘One Two Three, One Two Three’ (Rosalind Stopps), ‘On the Evening Train’ (Fiona Salter) and the brilliant ‘Here’ by Samuel Wright.

The first of these short stories begins with a wonderfully alluring opening: ‘This is how I know that timing is important. My mother was a formation dancer.’ This is followed by a lovely paragraph which manages to tread the careful step between the profound and personal, without being too pretentious:

‘Timing is everything,’ she said. ‘Count it out and you can make order out of chaos, keep the dark at bay. If you keep counting your life will be a dance. Mess up a little? You can get the order back, just as long as you never miss a beat. Remember that.’

So starts an intense, heartfelt relationship between the ever-counting narrator (trying to keep things in order) and his light-footed mother who laughs and loves easily, yet seems to have a darkness, a fragility contained beneath it all. It’s great writing.

Fiona Salter’s ‘On the Evening Train’ reminded me of Mark Mays’s short story ‘Motes’ in the anthology Unthology 9 published by Unthank Books (reviewed by me here). Both involve the time-draining, mental strain brought about through unemployment and a double shot of the seriously weird.

Salter’s prose is clear and concise, the narrator has a distinct, often humorous voice that likes to play around with conventional sayings, clichés (on being made redundant: ‘ask not for whom the leaving collection tolls’ and the modern dating world (‘I sent him a ‘wink’ – though in the real world I have never winked at anyone or thing’) – all of which makes for thoroughly enjoyable, compelling read.

Perhaps my favourite short story in the anthology is Samuel Wright’s ‘Here’. The title is somewhat underwhelming, but the story itself is gut-wrenching. Wright gets the balance just right between literary technique, plot, and structure – the result is a rich, shiveringly atmospheric story; we’re given a glimpse of a bleak landscape, one of sheep, superstition, and gossip – a world that gets progressively darker until there is no light and all that is left are the monsters.

I desperately want to steal this story and call it my own. Here’s the opening to give you a sense of the scene and nothing more will I say (please go buy the book and support independent publishing):

‘Witchcraft here was a thing of bone and gristle, and nails. Thick nails, square headed. On a barn, an owl, wings wide and bloody, nailed to the beam to ward off storms. In the chimney breast, a toad, thick with soot and pinned with thorns. Under the bedstead, behind a brick, a bullock’s hearts studded with iron.

But here, sheep die, stones fall, nothing changes unless you heave it into place with your own hands. And if you love something you grip it tight.’

Anthologies are often hard to review because of the diversity of voices, narratives, and the pick-a-mix themes, but both the quality and the general vision of Dusk unifies the individual short stories, leaving a pleasurably haunting sense of its characters making their way in the world, doing their best to get by as the light begins to turn in that in-between time ‘when anything is possible’, as the industrious editor, Cherry Potts, notes in her brief introduction.

Dusk can be purchased here.

Rupert Dastur is a writer, editor, and founding director of TSS Publishing. He studied English at Emmanuel College, Cambridge, where he specialised in Modernism and the Short Story. He is Associate Editor at The Word Factory, a leading short story organisation based in London, and he has supported several short story projects and anthologies. Rupert’s own work has appeared in a number of places online and in print and he is currently working on his first novel.

Please note that TSS Publishing may earn a small commission from Associate Links and adsense.